To make my battles more interesting I am planning out a campaign using the campaign concept from KISS Rommel rules. Through a series of battles the objective is to push back the enemy back to their starting zone. 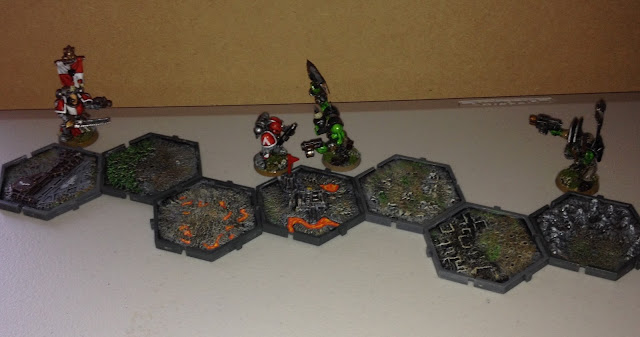 Both sides start in the centre at the mining complex. The map uses Planetary Empire snap together hex tiles. With each battle the winning side can progress forward one zone. The Orcs home base is in the mountains and the Space Marines home base is at the space port. Once your home base is overrun the game is lost.

Each side chooses 10 units as their battle force. I try and select a range of units in varying sizes to ensure a level of balance between the sides. This is a rule or thumb approach rather than any points system.

At the start each side gets 4 urgent reinforcement tokens. This allows them at any stage during a battle to call upon one unit to join the battle - marching to the sound of guns. More than one token can be played during a battle, once per turn, until reinforcements arrive on a successful 4+ dice roll.

For each battle 2 dice are rolled to determine the number of units per side. The number of units is equal to the highest value and halve the lower value rounded up. So a roll of 5 and 3 would be 7 (5 plus 1.5 round up to 2).

To decide which units in your force are available for the battle. Shuffle a deck of 10 cards numbered 1 to 10 and place a card against each unit. Select your command unit and all units from 1 to 6 as your battle force, and set aside number 7 for reinforcements if called upon. Do the same for each side. 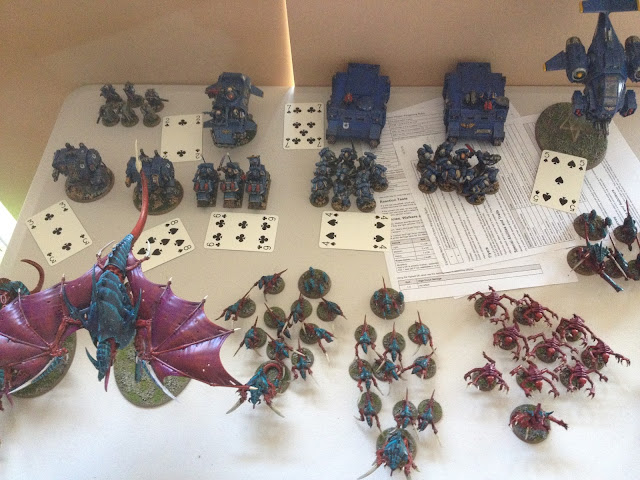 After the battle all destroyed units return to your force with a 4+ dice roll. If they fail, remove them from your force.

Email ThisBlogThis!Share to TwitterShare to FacebookShare to Pinterest
Labels: Campaign

While I continue to do one off solo games, I am getting lots of ideas for a mini-campaign from reading Donald Featherstone's Solo Wargaming book (available as an iBook). I remember reading as a library book last when I was 13 or 14 years old. I'll probably end up "mashing" up the campaign approach from KISS Rommel rules with the chance card ideas from Solo Wargaming.

In terms of current modelling projects, I have two on the go: building up my very small 40K Chaos force; and creating some units for a KISS Rommel game using some old Peter Laing 15mm models with home cast vehicles. 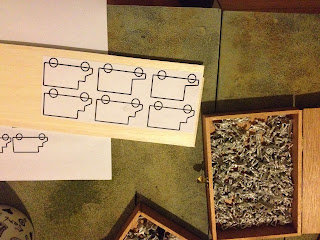 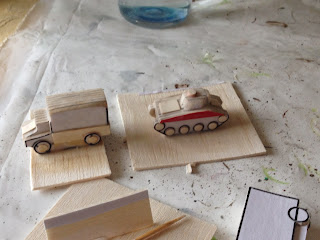 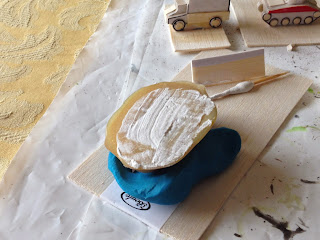 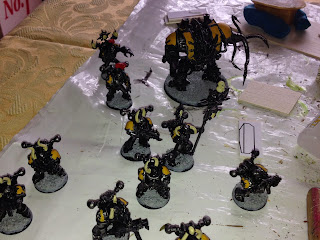 The home case models are originally made from balsa wood, covered liberally in PVA glue and sanded, before creating a latex mould for plaster casting. Its a bit hit and miss with the resulting models all which all need some remediation work, but I'm not looking for perfection and I get to create some hypothetical forces for next to nothing. FINALLY I get use up some old figures I'd packed away and carried halfway around the world.
Posted by Peter at 21:47 1 comment:

Another Battle - Another Rule Modification

Another battle and another rule modification or two. This week I was able to set up a quick game between Space Orcs and Space Marines (Sons of the Sword Chapter). A fairly straightforward game, where the Space Marines have to attack and occupy a Orc fortified position. 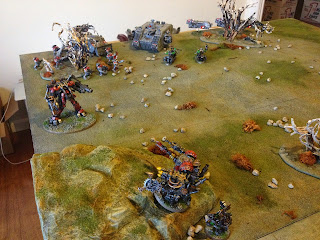 Orc Bikes harass the Space Marine forces as they appear. Meanwhile an oversized Killa Kan takes up a defensive position on a hilltop. 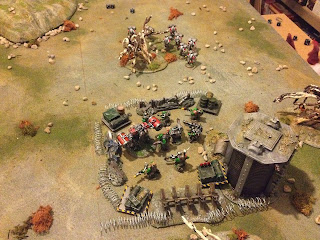 While the Orcs are focused on the frontal assault an Assault squad deep strikes close to the Orc fortified position and takes cover. The Orcs open fire with everything they have and the Marines take a couple of casualties. Reacting to the fire (as a fast unit) they charge into the fortified position using their jetpacks. In the ensuing melee the Orc squad is put to the chain-sword. 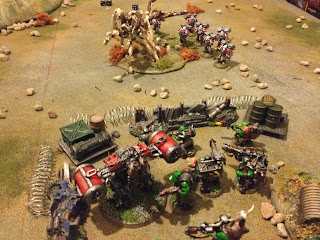 The following move saw the Killa Kan destroyed and the objective taken.

From this battle I ended up making two changes and updated my grid based rules.

Firstly, I have worked out how to differentiate between a flamer (hand held) and a heavy flamer (vehicle mounted). A flamer is of medium impact and can ignore personal armour. Therefore will continue to be effective in assaulting troops, but will require a 6 to cause a vehicle or monstrous creature to take a saving throw. While a heavy vehicle mounted flamer will always be high impact.

The second modification was to vehicle overruns. All vehicles can overrun and roll a D6 minus 1 from the score for casualties. Similar to a blast weapon. In the case of light vehicles the hits are low impact, with medium vehicle causing medium force hits and heavy vehicles high impact hits.

This weekend's battle report is of an assault on industrial complex known by its number 314, which had been overrun by Orcs. A Space Marine assault force from the Son's of the Sword chapter have been called into retake the complex, and in particular an alien artefact, which if decoded could influence the whole campaign on this world. 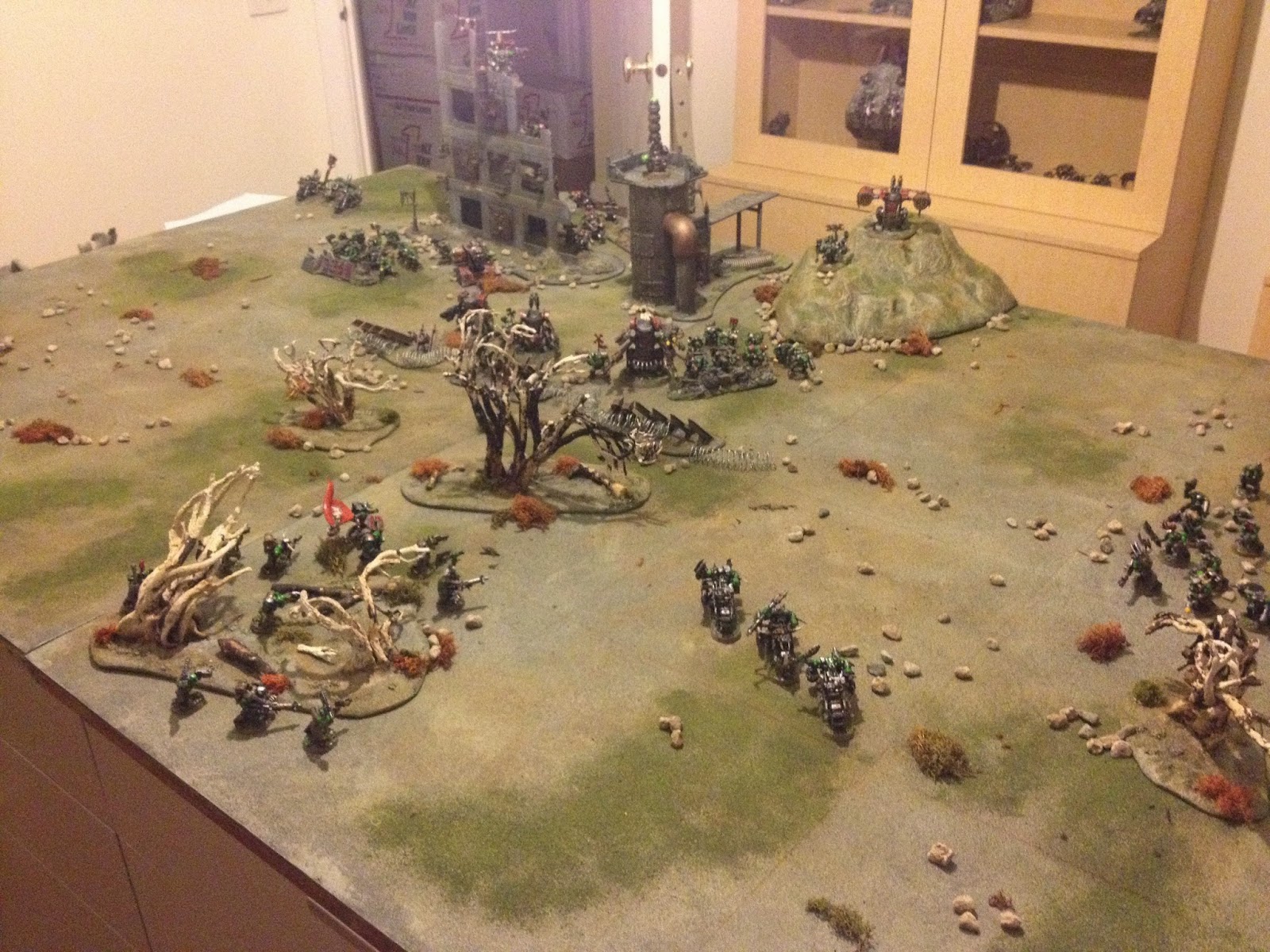 The Orcs have put up defensive lines around the industrial complex with roaming war bands in the surrounding area. The assault force comprises:

- a scout squad which start the game on the board and are treated as covert.
- two armoured land speeders.
- an assault squad
- a drop pod with tactical squad
- a Jet fighter
- a storm raven with terminators and dreadnought
- a small assault squad in reserves to be used anytime after all unit have arrived. 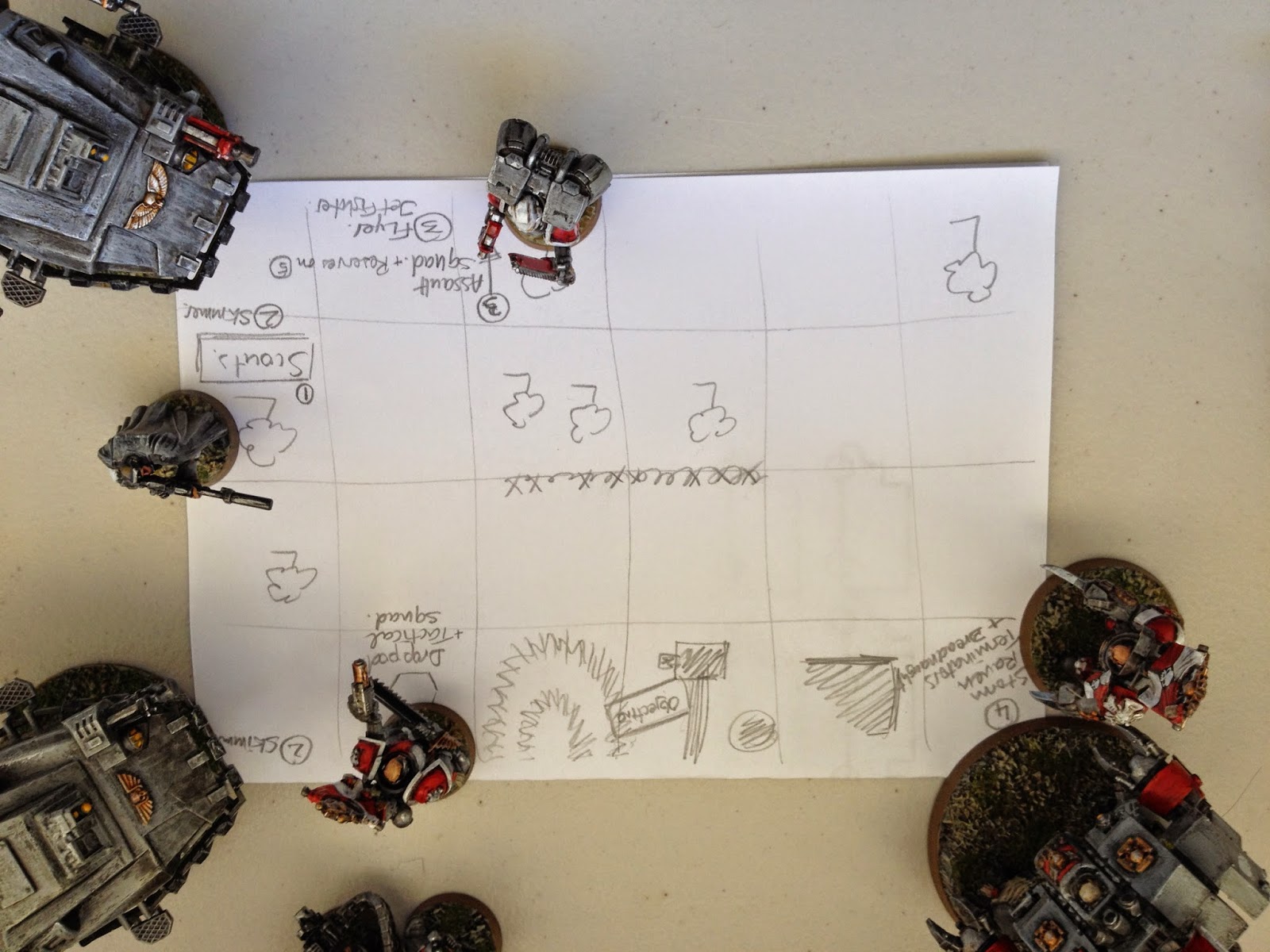 The landing areas were mapped out in advance along with the turn they arrive.

The game started with the arrival of both armoured land speeders to support the covert scout squad. One was quickly downed with a bombardment of rockets from a Killa Kan on the hill. The scout squad opened fire on a mob of orcs. 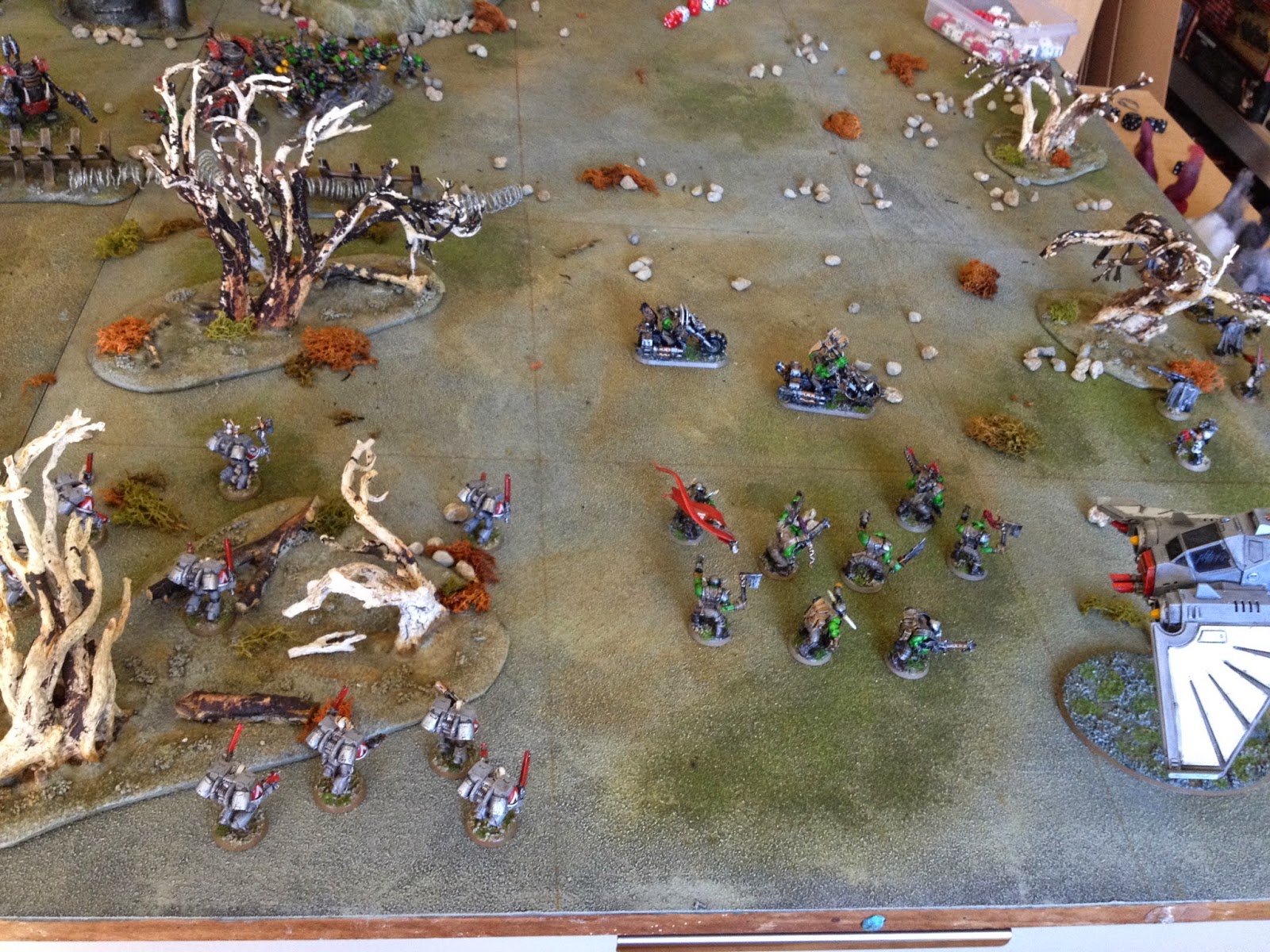 Another orc mob and war bikes close in on the scouts squad. While behind them an assault squad arrives and a jet fighter helps provide support to the beleaguered scouts. 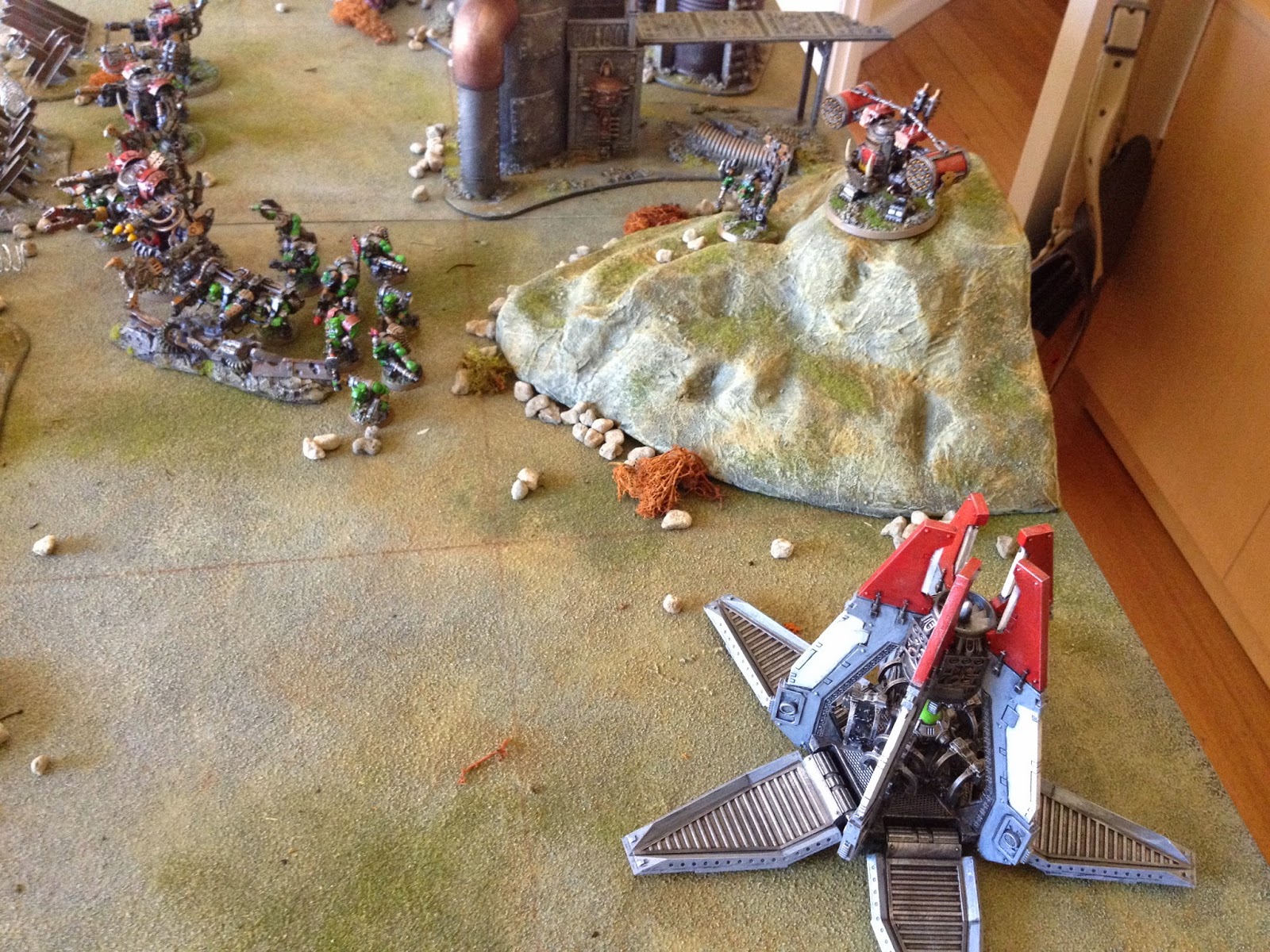 The drop pod arrived and delivered a Tactical squad which was quickly wiped out with some high rolling orc shooting. This was a major set back for the Son's of the Sword. 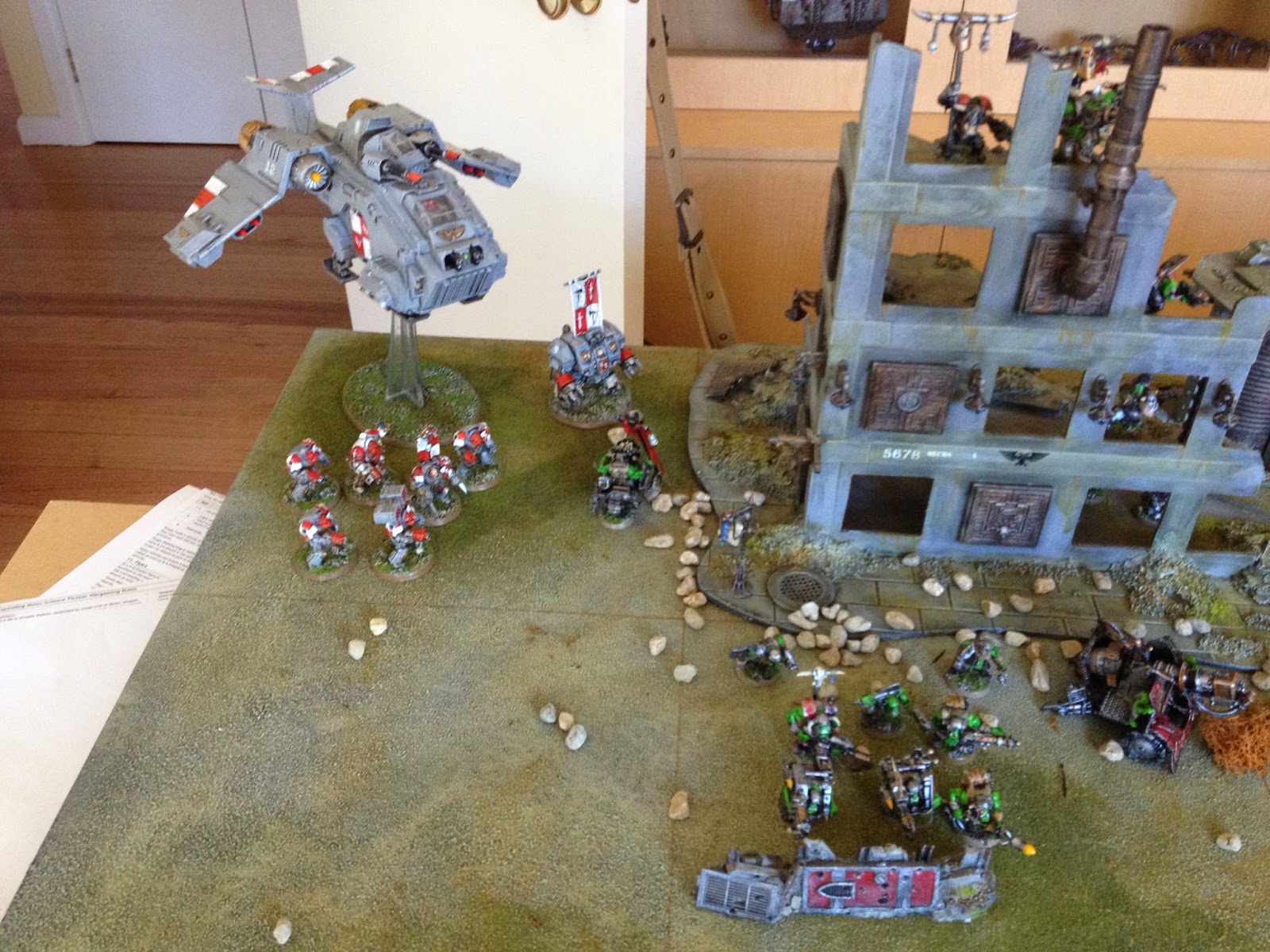 Next turn the Terminators and Dreadnought landed without casualties. 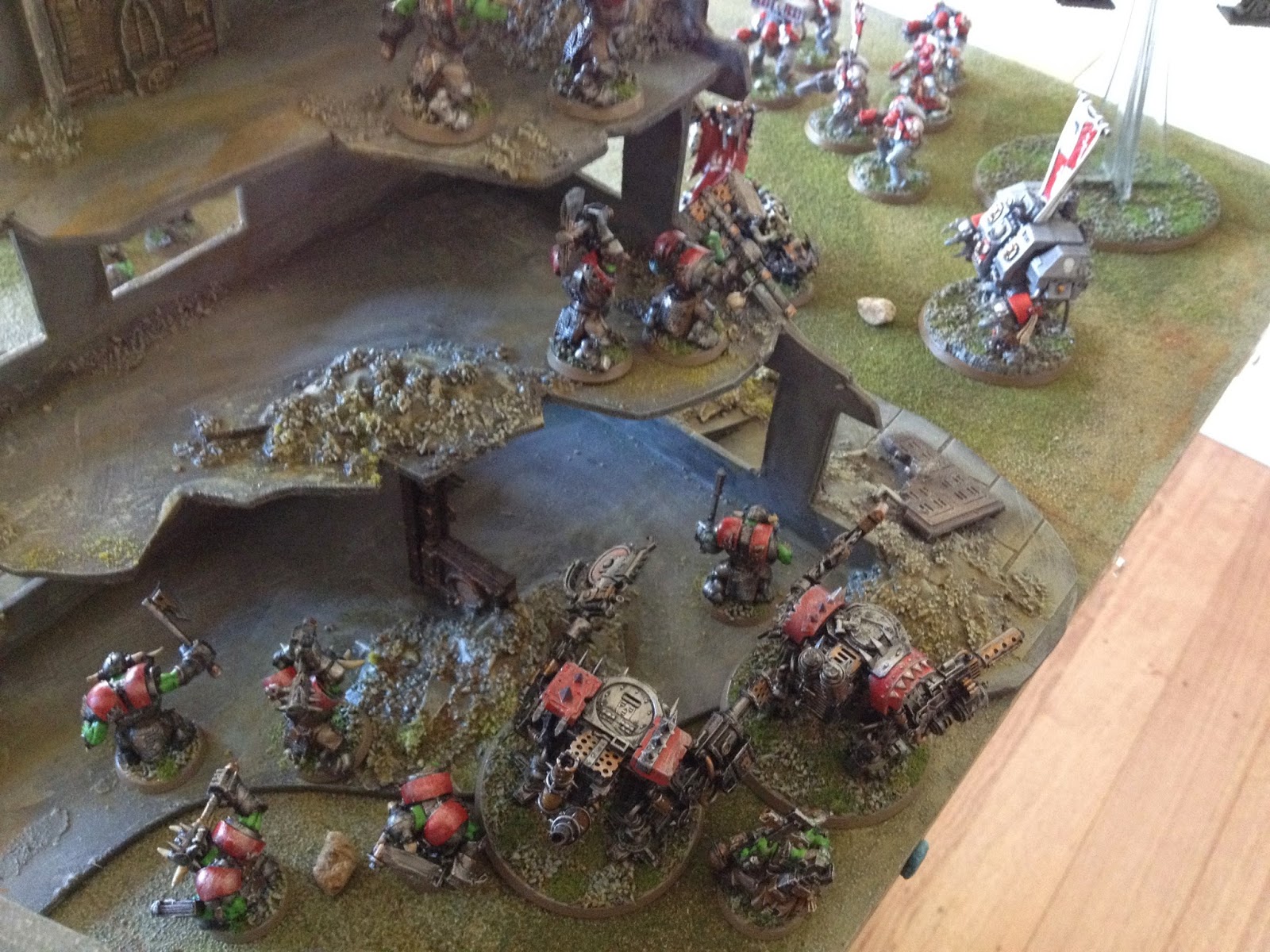 The Orcs with Killa Kans ready for an assault in the industrial complex. Using a couple of interventions they were able to launch a surprise attack. 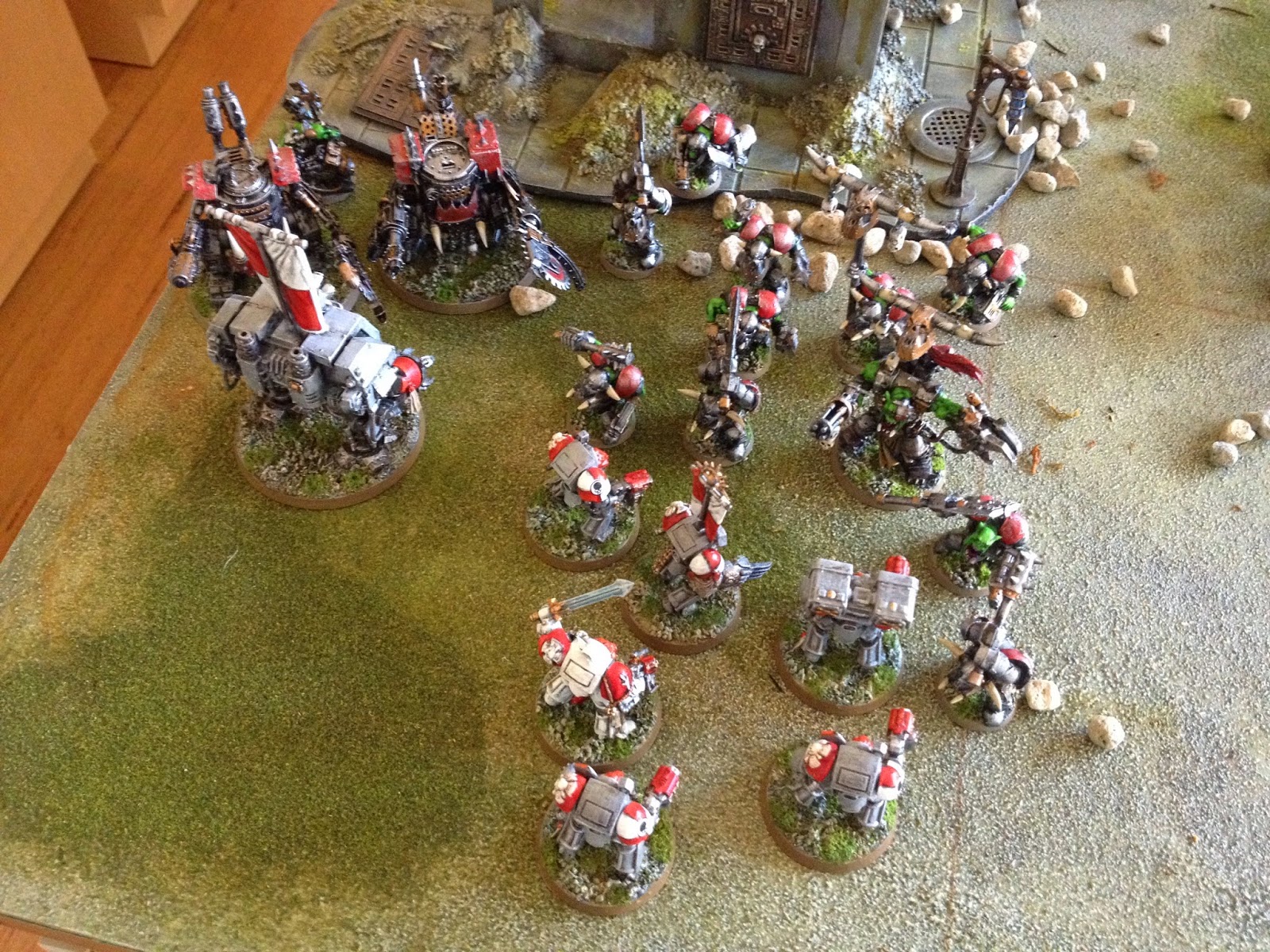 While a desperate battle was fought out with the Terminators, elsewhere the Assault squad using interventions to make multiple moves launched an attack on the front of the industrial complex. The final reserves a half Assault squad turned the battle for the Son's of the Sword. 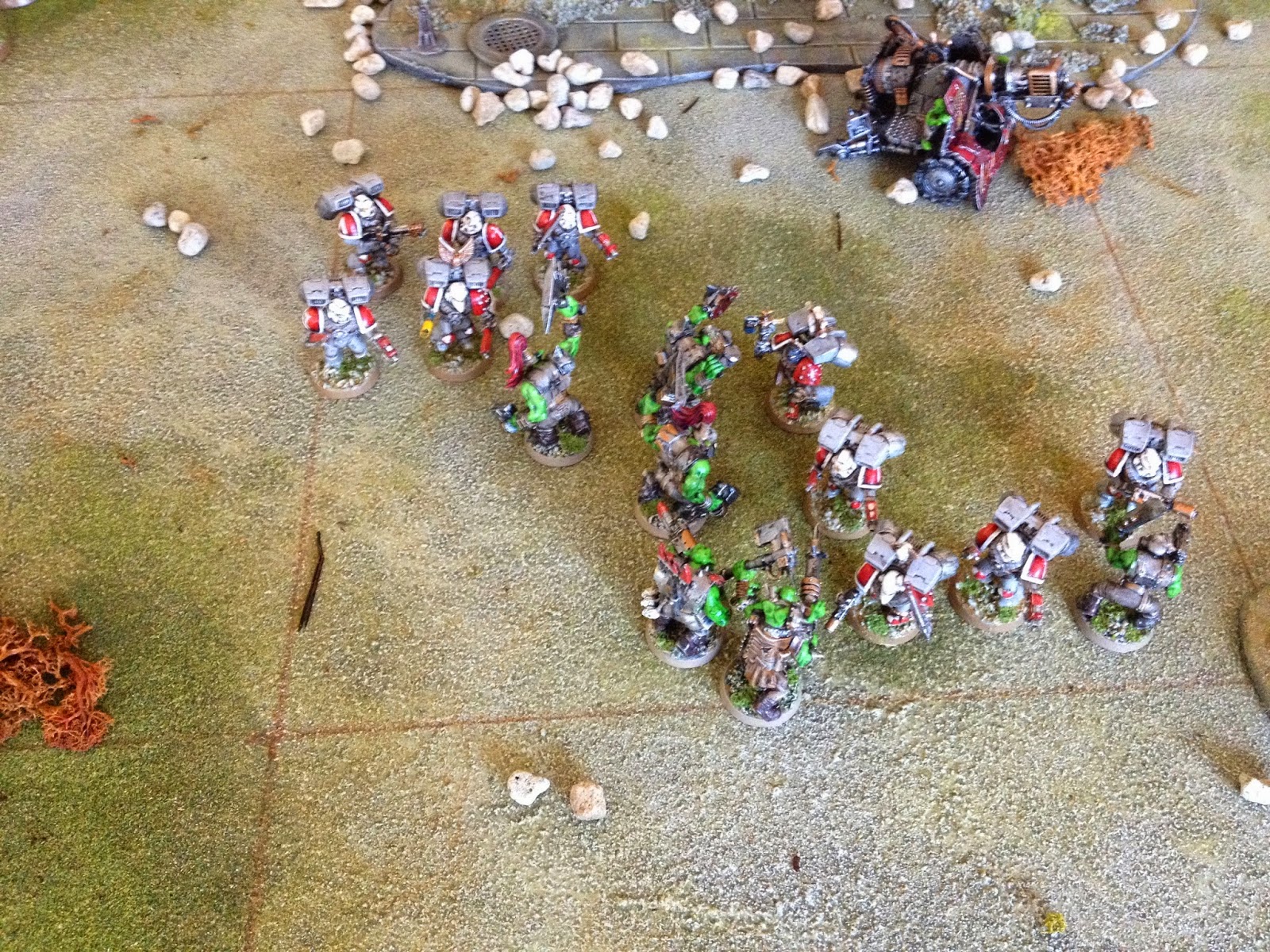 After dispatching the Orc mob the Assault squad moved into the complex to engage Orc reserves defending the objective. 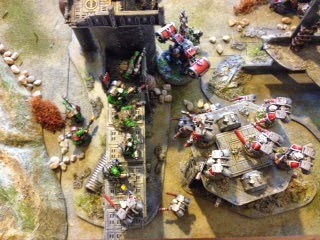 Meanwhile the Dreadnaught took on an oversized Killa Kan. 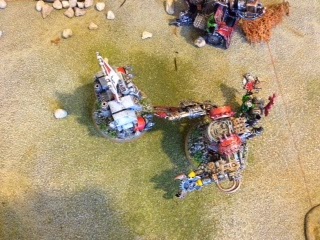 Finally, the objective was seized as the Assault squad continued their rampaging successes dispatching a Killa Kan and Orc mob. 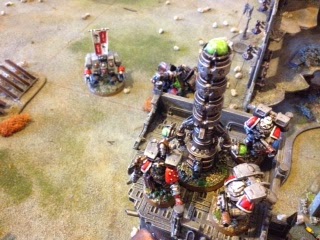 This game highlighted the need to clarify the rules for recovery actions with flyers. Flyers can recover   with a 3+ but still require a 6+ to attack.
Posted by Peter at 20:58 No comments: