Game 15 of the French India War campaign has delivered a full on siege game, the siege of Quebec - June 1758. For details of campaign narrative and the context to this game, read Jonathon's Palouse Wargaming Journal.

My rules for siege warfare when starting this game were at best a series of notes. So before beginning the game I ran a quick test game which helped out with a couple of areas I was unsure about. These were:

Limiting Parallel Trenches
There is a limit to how many parallel tranches can be built. This stops the besieging side over fortifying their parallels and making it next to impossible for a defender launching sorties. Should a defender choose to fortify their 1st parallel too much, they will struggle to have a solid 3rd parallel platform from which to launch their assault.

Siege Turns and Tactical Turns
At the end of each siege turn either side can launch a sortie (if defenders) or a surprise assault (if besieging). The jump off points are either the fortress walls or a parallel gallery. Up to 3 units can participate in a sortie or assault.

To effect surprise a single D6-1 is rolled for each unit participating to determine the number of squares they can advance before being detected. Then a small engagement occurs using my standard tactical rules. At any point on the start of turn the attacker can choose to call off their attack and both side's units return to their defences.

Artillery and Mortars
During siege turns artillery can only attack other guns or mortars. Only after the opposing artillery are eliminated, only then can fortress walls or galleries can be attacked. Taking 6 hits to breach a fortress or destroy a parallel gallery.

Also, artillery during a siege turn have a range of 6 squares and mortars 3 squares.

I will be writing up these siege rule mechanisms and others used in later posts, but in the game report I have included notes on the effect of some of the rule mechanisms.

With the counter-vallation in place the besieging British begin digging their 1st Parallel. The British must complete their 1st parallel before starting the 2nd parallel.

Having developed the 1st parallel and fought off a sortie it was time for the British to develop their 2nd parallel in which they can place their mortars and infantry to try and clear the fortress walls of defenders.

With the 3rd parallel completed the British bring forward all their troops and the French prepare themselves for the coming assault and storming of the fortress.


A victory to the British and the remaining French units march out. Both sides lost a regiment a piece in the siege.

Thoughts on rules and future ideas to consider...

The ability of besiegers to reposition units and pull them out of the forward parallels gives them a definite edge over the besieged who have limited ability to rotate their units. To offset this future rules  will have attrition of D3-1 per siege turn to represent depleted attacking units due to a combination of desertion and foraging.

Mortars cannot target individual units. They target the fortress and the besieged apportion hits how they like across units.

Anyway, I will be doing more work on these rules over the next week while I remember the reasons behind my notes on rule mechanisms.

I am finally getting around to the next French Indian War campaign game. As usual campaign details and background to this game are to be found on Jonathan's Palouse Wargaming Journal. Game 15 has delivered the opportunity to undertake a siege game and use my recently completed fortress.

When setting up the tabletop it looked a little bit stark. So I decided to quickly make a backdrop of Quebec, as the tabletop represents an area of the city defences being targeted by the besiegers. A quick look at a print of the time helped provide some inspiration to turn one side of a cardboard box into a backdrop held in place by blu-tack.

The siege is of Quebec, June 1758, and has Montcalm (A4D4) deciding to remain behind the fortress walls. All forces have been increased by a factor of two from those in the order of battle details from the campaign. French forces are:


The attacking for commanded by Wolfe (A4D4) has:


As this is the first real test of my siege rules, or should I say scribbled rules, and I have opted to keep things as simple as possible. Setting aside the investment stage of a siege where the besieger sends out highly mobile troops to mop up stragglers before the main force arrives.

The game will start at the end of the counter-vallation stage after the British have built entrenched positions out of range of fortress guns to defend against French sorties.
Posted by Peter at 22:50 13 comments:

Late this week a parcel arrived full of Spencer Smith plastic figures. The opportunity to purchase these figures came last month from a fellow Blogger who was helping a family sort out and deal with  a wargaming collection of figures and books.

The majority of figures are from Spencer Smith's 18th Century figure range, but do include few Napoleonic cavalry which will provide useful additions to my Napoleonic armies. The infantry are a mix of traditional looking Spencer Smith figures and their Connoisseur Figure range.

Here are photos of some of the collection...

This collection, particularly the cavalry, allows the expansion of my Seven Years War French Indian War collection to include European battles (eg the Battle of Minden). In addition some figures will be used to add the odd unit of cavalry and infantry to my Napoleonic forces.

For the moment though I am carefully sorting and storing these figures. I have to first complete painting my English Civil War figures.

Email ThisBlogThis!Share to TwitterShare to FacebookShare to Pinterest
Labels: SYW

Making rules in a mini-booklet format

For the present I seem to have settled on my 3D dice WW2 house rules. My available hobby time this week has been spent playing and testing these rules with some small games. One thing I really wanted to do was get the rules slimmed down so they would fit only one page. As I like simple rules and preferably short rules.

The reason behind aiming at one page of rules, was somewhere in the back of my memory I remembered reading on anther blog where they had written their rules in a "zine" format. If you are wondering what is a "zine" format? Simple ones are one sheet of paper folded into a mini-booklet. A Google search of "zine format" soon provide me with the necessary instructions.

The idea must have stuck in my memory, and now with these WW2 rules it seemed a good time to try and produce them in a "zine" booklet format.

(After a bit of searching I found the blog and post here.)

The booklet is nice and convenient and don't take up as much room as a flat sheet of paper on the tabletop. I do put a couple of staples in the centre fold to hold the booklet together.

Anyway here are some more close up photos of the rules themselves. As you can see my proof-reading is a bit suspect. (I always did get "tries hard, could do better" in my school reports.)

The smallest font I used was 14pt to make reading easier.

Not a lot of wargaming or painting done this past weekend due to disruption from other necessary activities taking priority. However, with what available time there was, I did manage to complete a unit of Dragoons to add to my English Civil War armies. At the rate I am going in a couple of months I should have sufficient to have an ECW game using One Hour Wargame rules and a scenario.

I did manage to squeeze in a WW2 game yesterday. I have been messing around with some rule changes for a few weeks now. It has been the usual case of some changes worked and some didn't. Anyway, while I had little time to play over the weekend, I did have time to ponder the rules and a scribbled set of rules was completed. I am now playing through some test games while typing up rule changes before I forget them, and trying to slim them down to fit on one page with a readable font size.

Over the next week or so I will get the opportunity to play out a siege game as part of the French Indian War campaign (see Palouse Wargaming Journal).
Posted by Peter at 22:47 7 comments:

Yesterday a two secondhand books I purchased a couple of weeks ago arrived in the post. When I made the purchase I was originally looking for Wargaming Pike and Shot by Donald Featherstone, but I also saw Battles with Model Soldiers was available at a reasonable price and could not resist. 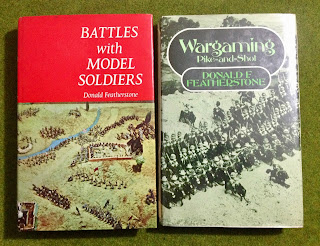