This post is a bit of a departure from the usual SciFi (40K) posts. After reading One Hour Wargaming by Neil Thomas I got to thinking about using my old Peter Laing WW1 miniatures for the Machine Age Rules from the book. I had ear-marked the old figures for another project, but I also found the other half of the WW1 figures (British and German) when doing some more unpacking leftover from moving 8 months ago. All up I had approximately 200 miniatures per army with cavalry, infantry, machine guns and some artillery. They were 80-90% painted from way back when I was 18 years.

I started rebasing the figures to play a coupe of games and created some simple scenery along the way. The painting was very simple: black undercoat, a quick one colour for the uniform, black for the gun, a dab of flesh on hands and face, and a final contrasting blob for any equipment. It was great fun and a marked departure from my usual painting style with my 40K miniatures. In no time I finished off the armies and had a game going. Very quickly I added a scratch built British tank and added some house rules (as the rules don't cover tanks).

A few more games and a quick read of the period in Donald Featherstone’s  “War Games through the Ages - Vol.4 1861-1945” and I was adding a Sturmtruppen unit, AV7 German Tank and aircraft. What I’ve ended up with is two armies of approximately 15 units, which is about as many as is suitable for a 4 foot by 6 foot table, and has consumed most of my available Peter Laing WW1 miniatures.

The scenery is all really basic with felt cut into strips for rivers and roads, painted sponges for trees, books for hills with a cover throw over them, and all scratch built. The table does not look over crowed with the figures and there is room to manoeuvre units.

As for the house rules - see free rule link (top right hand of page). The summary of additions are:

Movement - is variable, I took 3” off all those in Neil Thomas rules and added an average dice throw (2,3,3,4,4,5). For example infantry now move 3” plus what ever is scored with an average dice.

Assaults - some units can carry out an assault proving they are within an average dice throw on the target unit.

Added Tanks (Heavy and Medium) and Armoured Cards which need to throw to see if they move to reflect their unreliability.

Aircraft can perform limited strafing during the game.

All the vehicles are scratch built from balsa wood strips stuck together, sanded and covered in PVC glue.

Over the last few weeks I have been playing a few games to test out the changes I made to my Grid-based SciFi rule set. They seem to be working for me with only one or two typos and cross referencing to tidy up.

Here is a battle in full flight with a space marine dreadnaught waiting to reinforcements as chaos marines advance. The lava pits are bomb craters filled with some railway model rocks I coloured red. 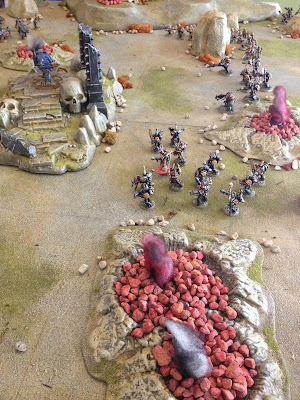 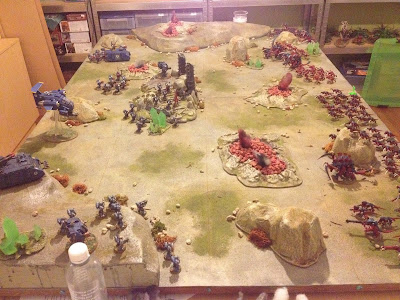 Now I just need to update the rules and read through them again in an attempt to minimise errors.
Posted by Peter at 18:26 No comments:

Well I finally finished tinkering with my grid-based rules (see link). And have been trying them out with my new Chaos Marines an army I'm slowly adding to. The changes were in the areas of interventions, weapon types, combat, and vehicle damage. I'll carry on playing with this set for a while now before thinking about any more modifications.


Last week I bought One Hour Wargames by Neil Thomas which I'm now reading and will no doubt tryout some of the scenarios. Looking at the rules in the book I thinking my rules appear somewhat bloated at seven pages.