This set of rules are a variation of ideas from “One Hour Wargames” American Civil War rules by Neil Thomas. These rules provide such a sound foundation to add modifications which include:

Event cards as described in “One Hour Wargames” are used with some modifications to help create some period flavour and add a level of uncertainty for solo-wargaming. The board-game Battlecry helped to inspire a few of the event cards.

The game has the following units:

Commanders are always attached to units, and up to 3 commanders can be used per side.

Generally games have between 6 to 9 units per side. When playing larger games with more than 6 units, 6 units begin the game on the tabletop with any remaining units in reserve. Their arrival is determined by event cards.

The use of a hex grid means unit's basing does not matter. The one limitation is how well a unit can fit into a hex which includes terrain.

The tabletop uses a hex grid. The size of your hex grid is depends on many factors, but generally for One Hour War-game sized armies (around 6 units per side) a 9 by 6 hex grid works well.
(Note - rivers run between hexes. This is because of musket shooting ranges which are 1 hex and having rivers running between hexes keeps the rules simple.)

Players take turns activate all or some of their units during their turn. During a turn a player follows the steps below:

A game ends after 15 turns are completed by both players.

Units may move up to the distances listed below during their turn.

When moving units they can move in any direction and must finish their movement facing a hex side.

Reacting to enemy units - Unless already facing an adjacent enemy unit, a unit will immediately turn to face an enemy unit when they move into adjacent hex. (The order in which a player moves their units to engage enemy units can be important.)

Terrain and its effects:

Units may not pass through other units, friendly of enemy, and may never finish their moves in the same hex as another unit.

Units must stop their movement when moving into a hex adjacent to any enemy unit. The exception is when the hexes are separated by a river.

Units must end their movement when entering any hex with a terrain feature. The exception is when moving along a road.

Shooting is only undertaken by units that have not moved during a player’s movement phase. The procedure for shooting is as follows:

Check field of fire and range

Infantry and cavalry units with a range of 1 hex can only shoot at a single unit in the hex they are facing. 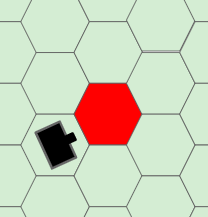 Units in buildings do not have this restriction and can shoot at any adjacent hex.

Artillery units have a range of 4 hex and must have a clear view of the target unit. I use a ruler (or piece of wooden dowel) to help decide of the artillery can see a target by checking the ruler does not cross a hex occupied by a unit or blocking terrain such as woods. 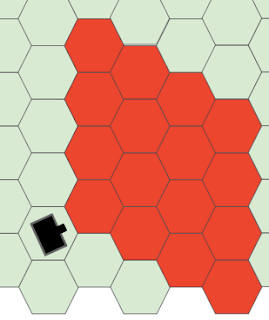 Artillery units positioned on hills are allowed to shoot over other units.

Artillery shooting at units not adjacent to them cannot shoot at enemy units adjacent to friendly units.

Units roll a D3 dice when shooting with the following adjustments:

Test morale whenever a unit takes any hits and is diced for after all attacks on the units are complete. Roll two D6 and sum the score:

A unit failing a morale test without an attached commander is routed and removed from play immediately.

A unit failing a morale test with an attached commander must remove the commander and is not routed. The commander was wounded or killed rallying their unit.

Units are routed and removed from play when they exceed 8 hits or fail a morale test.

Units failing a morale test with an attached commander remove their commander rather than being routed.

Infantry units with attached commanders involved in combat can advance into a hex vacated by a routed or eliminated enemy unit during the shooting phase.

Two sets of event cards are required for each player. At the start of each turn a player draws one event card and actions its effect that turn. Cards are not carried over into following turns.

There are 15 cards in all, one for each turn:

Outside set scenarios with defined victory conditions. A quick way of determining victory to to tally points. A player will get 1 point for: