This weekend I was able to finish painting a Tau Sky Ray Missile Defence Gunship. I've been working on it for the last couple of weeks. I'll be using the ordinance rules (from my rule set - see previous posts) with this model. 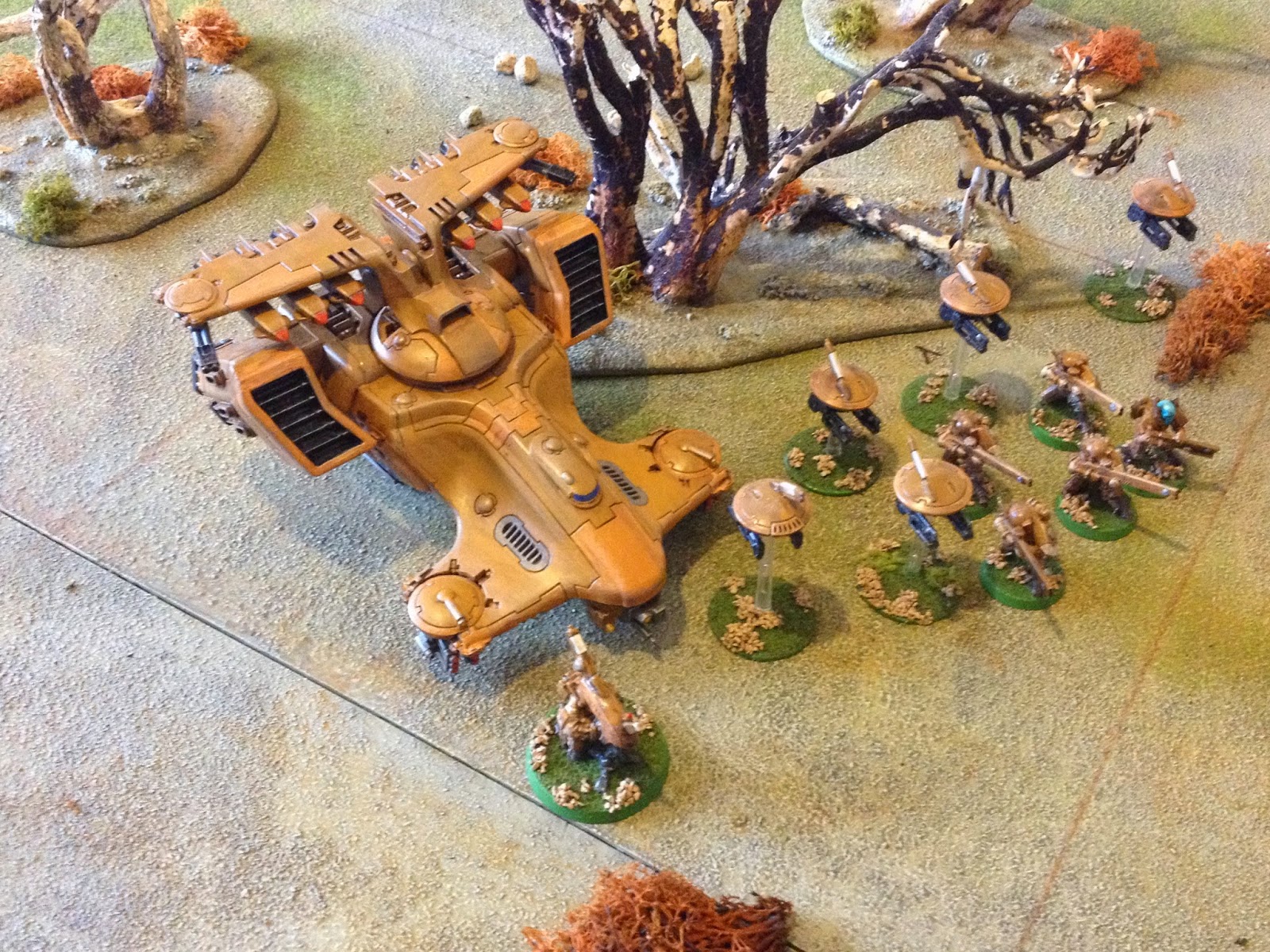 I use the model (in the front) from the sniper drone set as a marker to show which unit has the ability to use ordinance bombardment. The dead looking trees in the background are made from dried seaweed I found on a beach walk.
Posted by Peter at 22:33 No comments:

Email ThisBlogThis!Share to TwitterShare to FacebookShare to Pinterest
Labels: Tau

During the week I found time to set up a quick solo war-game between tyranids and space marines. Out of it can a couple of clarifications to the grid based rules (grid based SciFi Rules).

To start the game the forces were selected for both sides. Eight units each of varying sizes and transports being counted as part of the unit. Then all units except for the warlord, or commander's unit, were dealt a card two units with the highest card values were removed. The idea came from the very clever and simple KISS Rommel rule set. 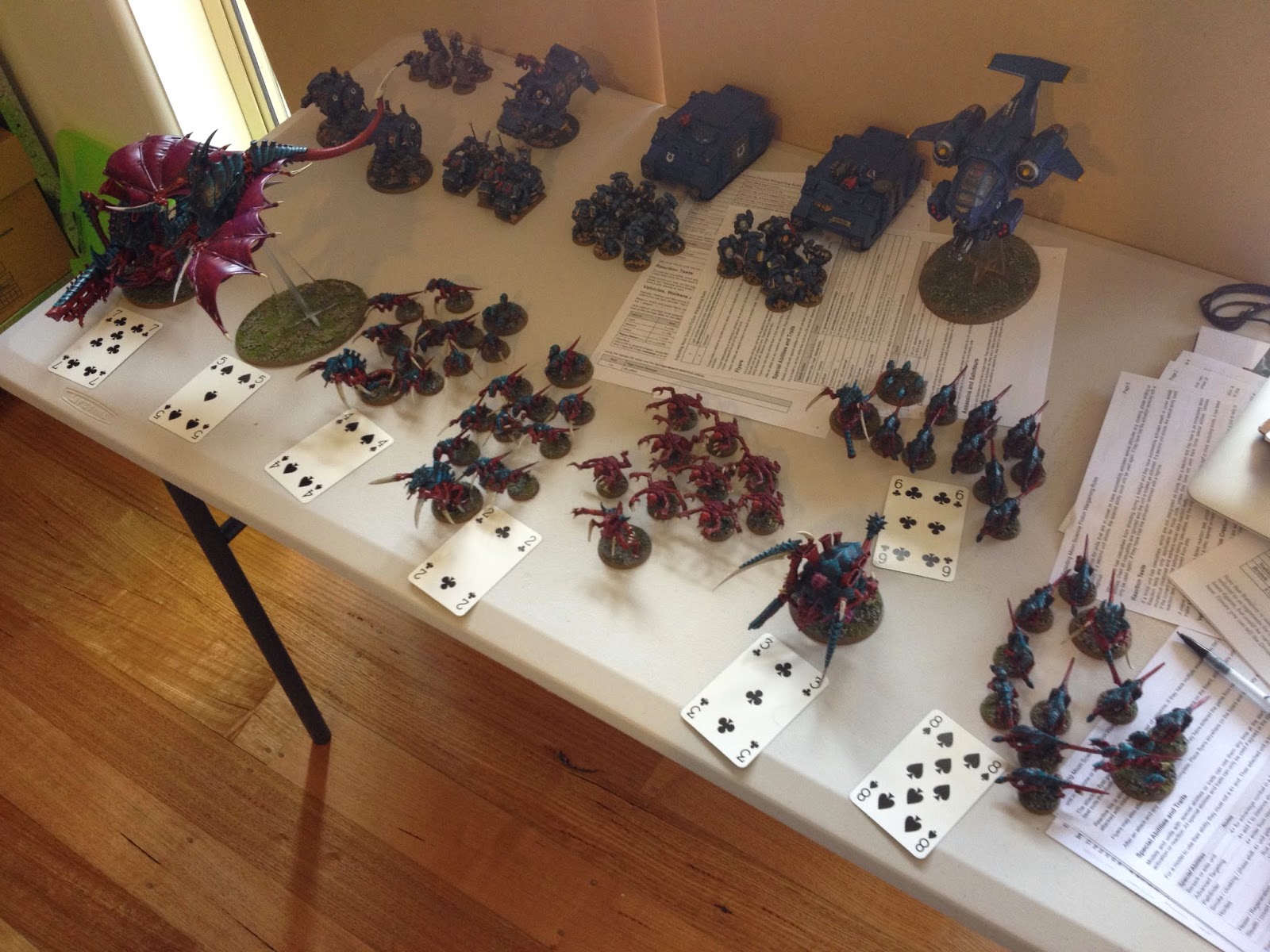 Both sides took up their positions on the board. The rocky outcrops represented impassible terrain between zones and causing forces to be split. 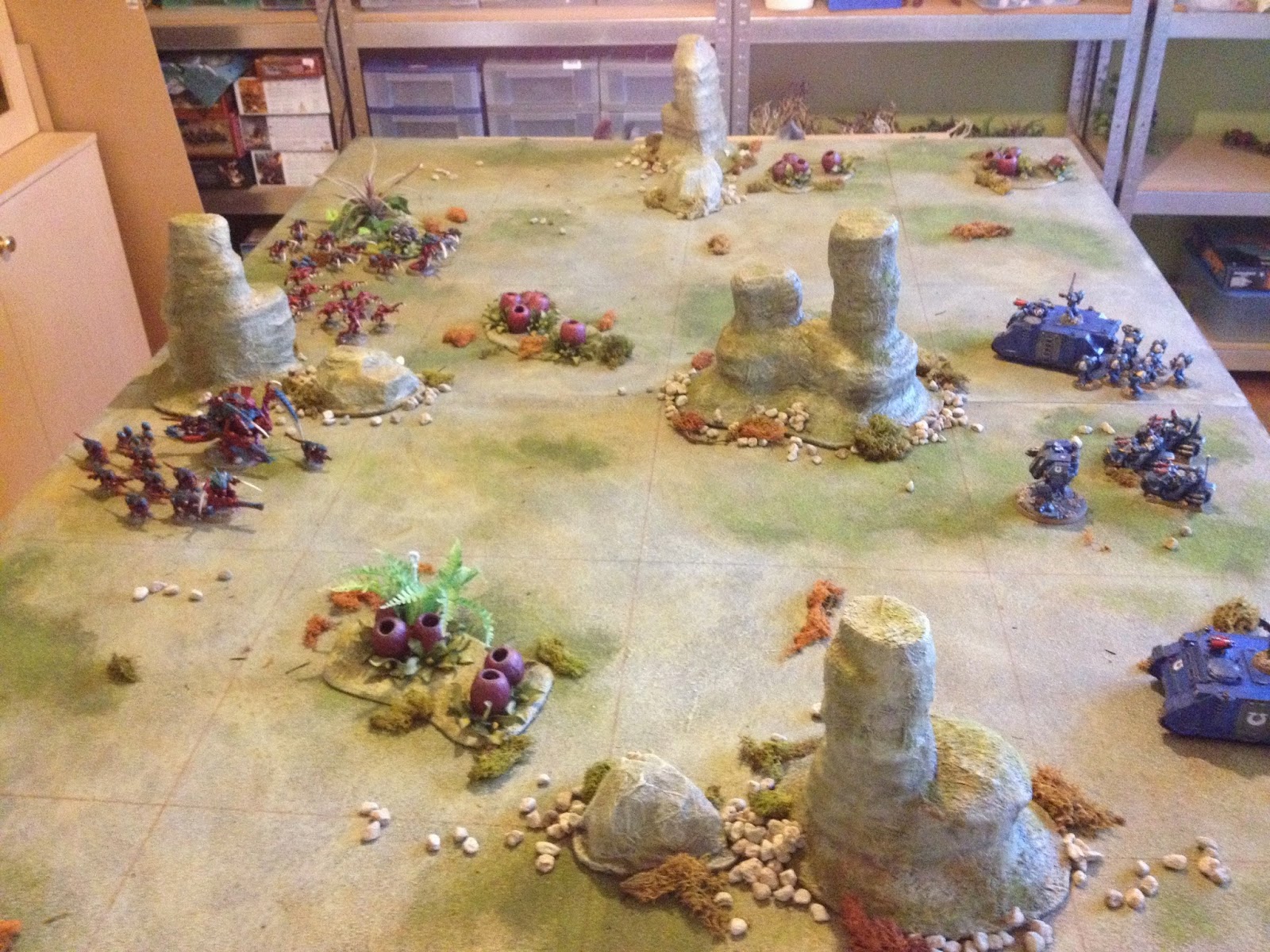 The space marine flyer was quickly bought into play to harass any tyranid units in the open. 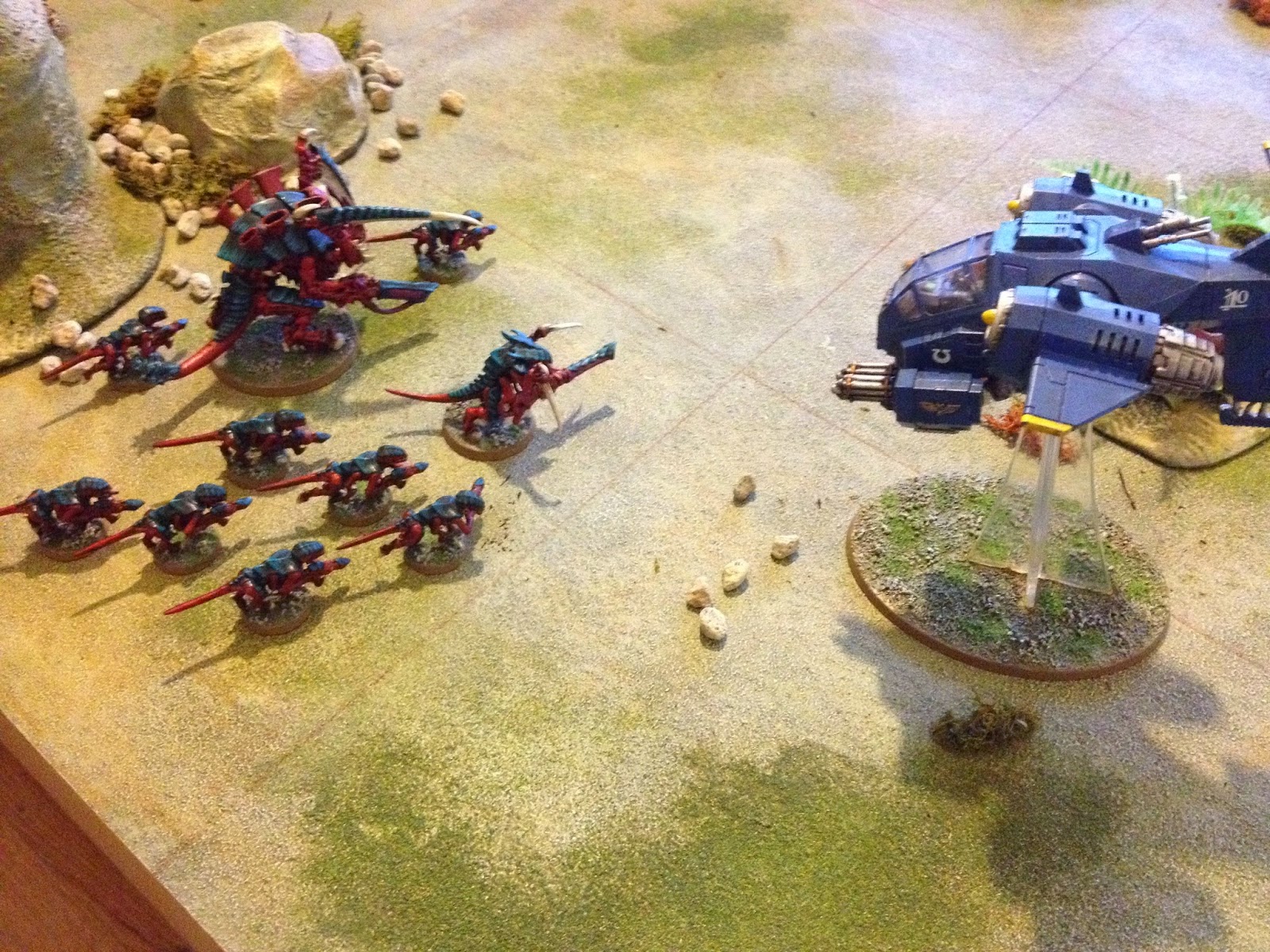 The space marines were able to focus their fire on one tyrannic unit at a time due to poor dice rolls. Early use of interventions to change this bad luck could have made life more difficult for the space marines. 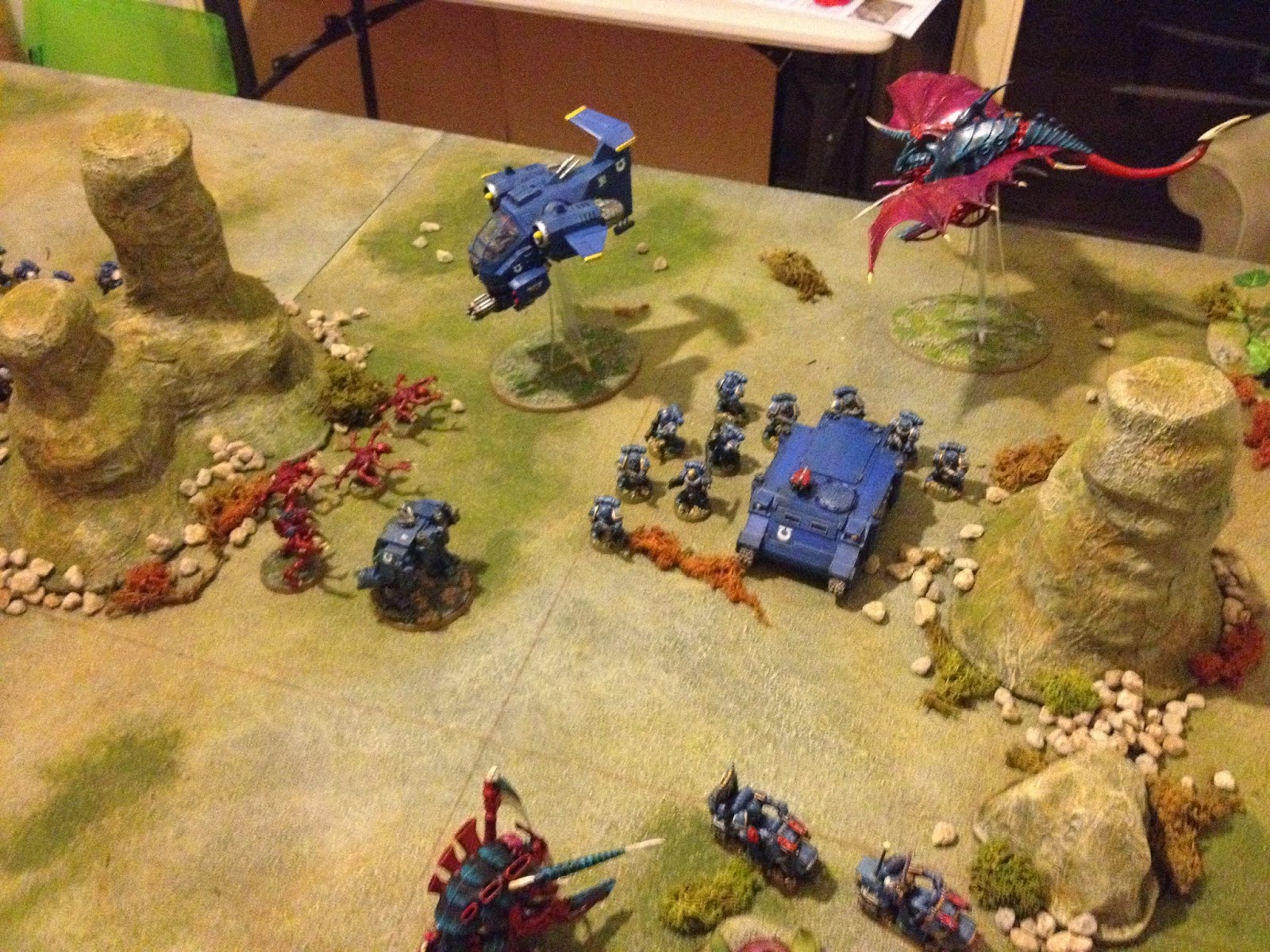 The tyranid flyer proved to be of little value and the marines soon used their fire power to clean up. 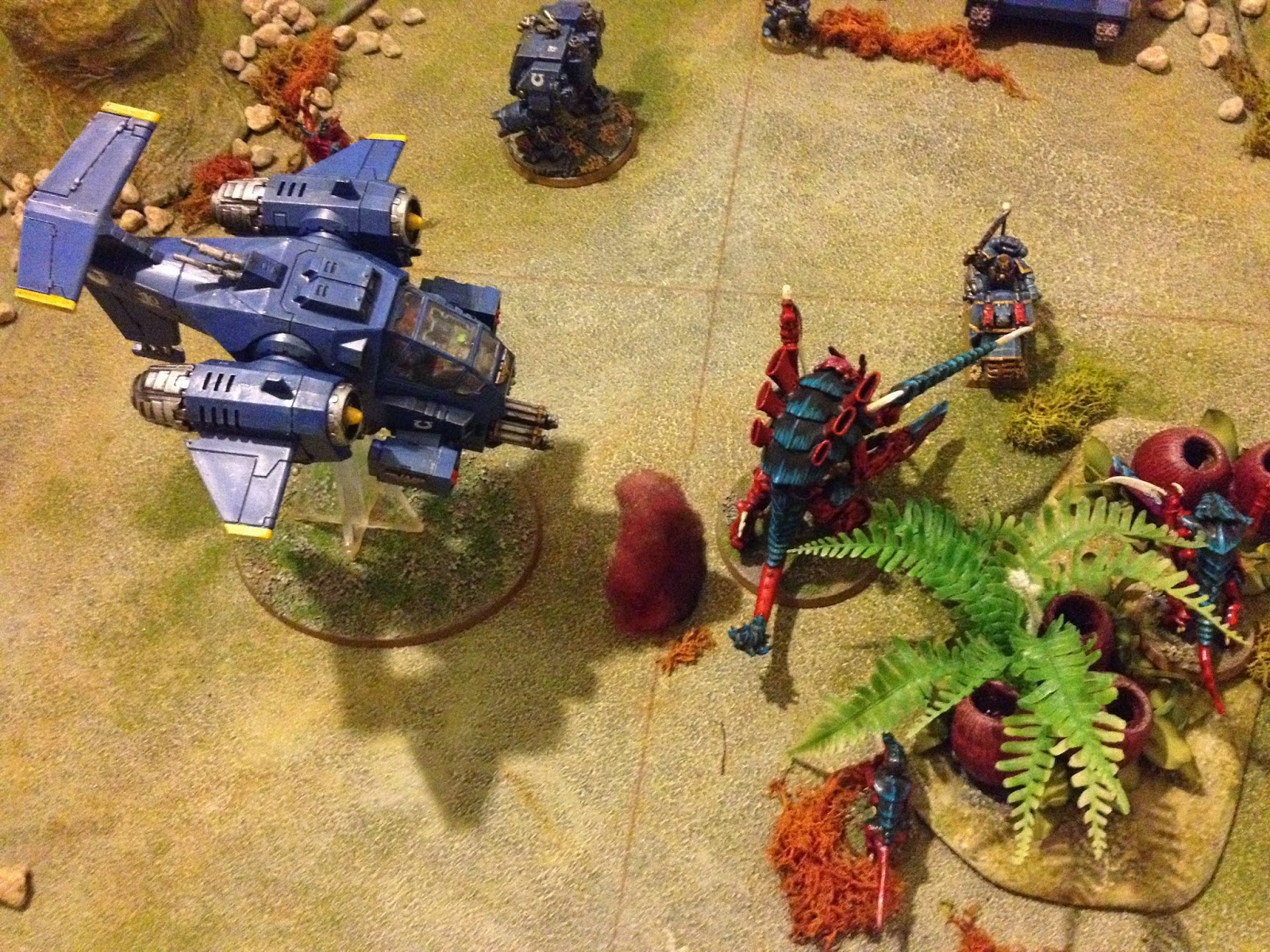 All up the game took 30 minutes to play.

This blog is about grid based science fiction wargaming. Most of my models are from the Warhammer 40K universe, having come back to wargaming as a common interest with my son from when he was 10 years old. Since he started university and is no longer at home. I started writing my own rules and have been wargaming solo. In doing so, I have moved to wargaming using a gridded 6' by 4' table, rather than constantly measuring. 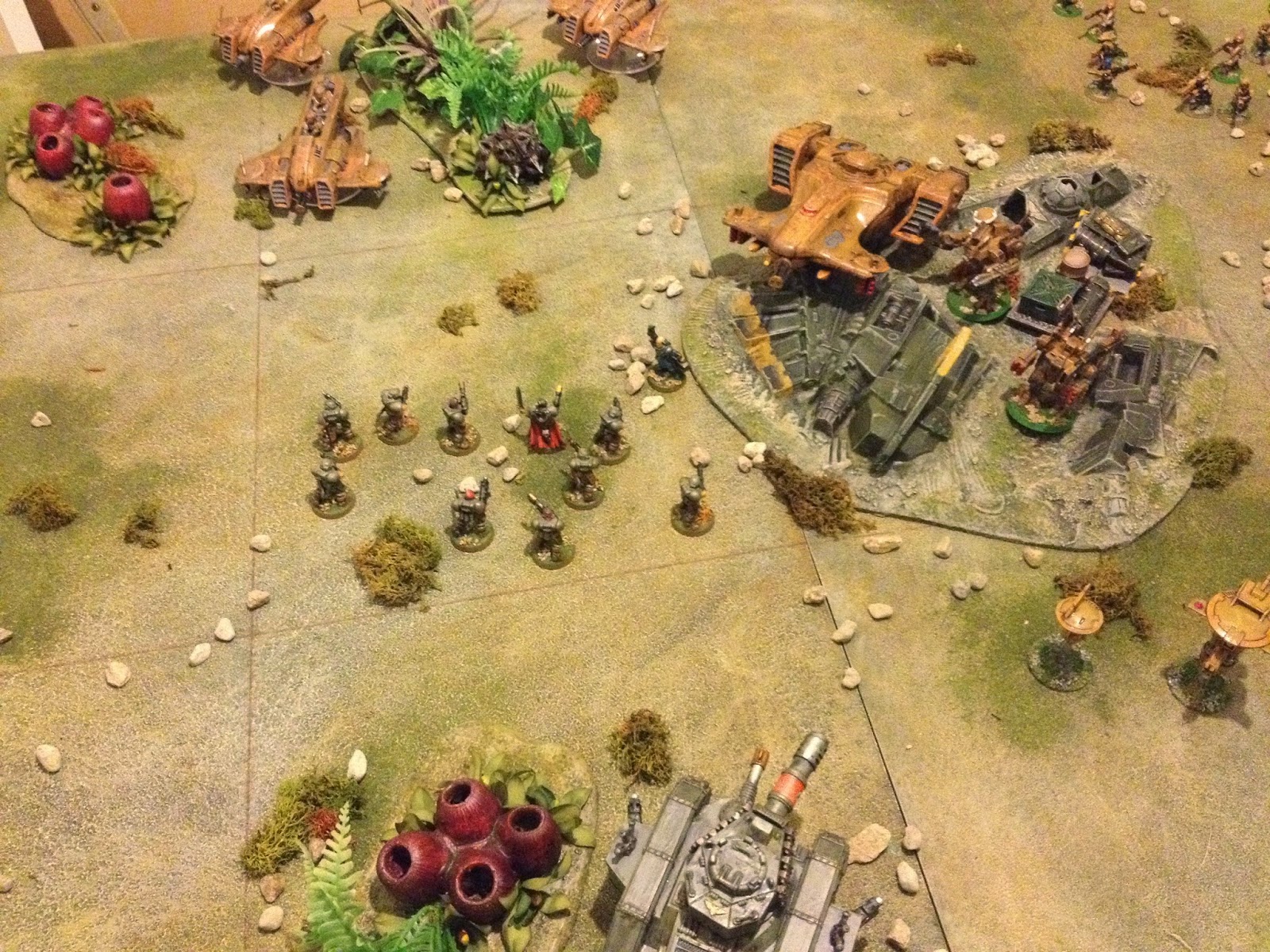 This is my first attempt at creating a site, and writing rules since I was in my teens. I will be adding any rule examples and battle reports over time.

My rules can be found here. They use a large grid (12"x12") which I term a zone as both sides are able to occupy a zone. Feel free to download for personal use.Grid Based SciFi Wargame Rules
Posted by Peter at 09:37 No comments: