A WW1 Albatros aircraft has been added to the Turkish forces and a S.E.4a is being made for the Commonwealth forces. I am continuing with a scratch building approach for the various vehicles I plan for this project. This time I am using balsa wood and wire.

To help get the right shape, particularly the wings, I printed off a couple of copies of blueprints grabbed off the internet. These are sized to 1/72 scale (or as near as possible) before printing. The wings and tail pieces are cutout and stuck to 1 mm sheet balsa wood. Once dry these are cutout.

The most time consuming part of making these models is the shaping of the fuselage from balsa wood. The blueprints help as the shape is gradually carved out. When attaching the wings I cheat somewhat and use some balsa wood to pack the gap between the top wing and fuselage. This adds to the model's strength and wire is used for the struts between the top and bottom wings.

The propeller is a disk cut from 1 mm balsa wood sheet. This is much easier than making a propeller, but take I bit more to paint later on. 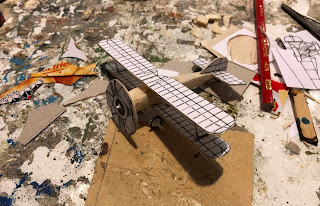 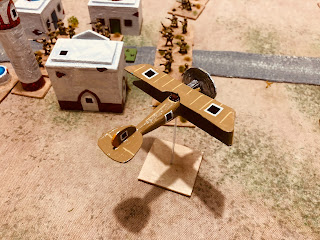 The whole model gets a think coat of PVA glue followed by artists gesso primer. The model is then ready for painting.

Next up will be some scratch built palm trees.

Adding some Arab units and an armoured car

Progress continues on the WW1 Palestine Campaign project. I have been able to keep focused and not get distracted. Units have been added to my growing Arab Rebellion force and yesterday I finished a simple scratch built Rolls-Royce armoured car.

The armoured car is made from bits of wood beading, dowel, cardboard, and green-stuff. It took a while to make as originally I used round dowel for the wheels, but this made the whole thing far too wide. Instead I reverted to using cardboard for the wheels.

When I finished the modelling I was a bit dubious on how the simple shape was going to turn out. I used paint to show various details rather than modelling them. Painting fortunately hides and disguises many faults.

The Arab Rebellion forces are gradually increasing. Some cavalry arrived recently and will soon be added.

I am sure the armoured car will be seen supporting any Arab attacks on the Turkish forces.

As the Palestine project has progressed two fellow wargamers have been kind enough to digout and scan  some scenarios from an old ruleset and also rules from old magazines. A quick thank you is due to https://warfareintheageofcynicsandamateurs.blogspot.com to and Rob. These have both been very useful.

One of the scenarios covered part of the Second Battle of Gaza which I have reworked for a One-Hour Wargame style game with influences from scenario 14 - Static defence. One unit type I was missing for the scenario was a tank. So this weekend I found some time to quickly scratch build a WW1 British heavy tank.

The tank is made from wood, various square and rectangular dowel, and MDF sheets. I used blueprints found online as a guide for getting the shape as best I could.

This game was played using One Hour Wargames Machine Age rules. There were a couple of modifications:

The defending Turkish forces are to hold both redoubts. Commonwealth forces have been ordered to capture and hold either redoubt.

The game ends after 15 turns and Commonwealth forces start the game.

Commonwealth forces must hold one of the redoubts by turn 15 with no Turkish forces within 6". If they do not hold a redoubt then it is a Turkish victory.

This scenario is based on a scenario from the Last Crusade WW1 rules called "Tank Redoubt - Second Gaza, Palestine, 19th April, 1917". Not having the quantity of units required, the scenario has been scaled down to a One-Hour Wargames sized game and influenced by the "Static Defence" scenario from the book.

Commonwealth forces decided to make Tank Redoubt their primary objective and used their preliminary bombardment to target all units in entrenched positions.
An enjoyable game. It was pleasing to see the tank unit performed well in its first game. How often do recently painted units get to the tabletop only to be removed quickly from play? As for the rules, I am still tinkering with them and may yet convert them to use D3 dice rather than D6 dice.
Posted by Peter at 11:00 18 comments:

Most of my hobby time this week has been spent on the WW1 Palestine project finishing the Commonwealth forces, starting the Arab Rebellion forces, and making some terrain. The terrain will allow me to soon start playing a few One-Hour Wargaming scenarios with the Machine Age rules.

Having finished enough Turkish and Commonwealth units for a few One-Hour Wargaming I have now started on the Arab Rebellion forces. First up was a unit mounted on camels.

The next items on the list was the creation some suitable buildings and trenches for the scenarios. The buildings are made from blocks of wood and dowel which are then painted.

The trenches were made from multi-use insulating foam board stuck on to 4 x 2 inch pieces of MDF, which were then shaped. They were then painted, sprinkled with sand, and sandbags added made from green stuff.

Next for the project, other than completing the Arab rebellion units, is to add some aircraft, armoured cars, trucks and a tank. I am thinking about scratch building these items.

This battle, part of the ancients campaign, takes place near the town of Ardea in southern Italy, 209 BC. This campaign turn sees the entry of Scipio the Younger on the scene. Can he change Rome's fortunes?

A previous post briefly covers the games setup and campaign background, but for more information of the step by step process for selection of terrain, troops, chance cards and deployment for a battle, see here - setup process.

Having deployed their troops first Carthage had the advantage of being able to move first. However, a confusion chance card was drawn which meant they were unable to move the first turn. Rome did not hesitate and used this unexpected turn of events to push forward on their stronger right flank. Soon there after most units in the first battle lines were engaged for both armies.

Mid-way through the battle both sides had used their rally chance cards to shore up their centre. The advantage was slightly with the Carthaginian army as the elephants were still causing problems, but Rome's heavy infantry on their right flank, which had quickly disposed of the Gauls, were continuing to cause casualties and looking threatening.

Rome was holding their own and was looking threatening down the right flank. Then they drew two confusion cards in a row. Not being able to move units for two turns meant they were not apply pressure on their attacking flank. This allowed Hannibal to reorganise his units on the right, while continuing his left flank attack with renewed vigour.

The later part of the battle had Carthaginian unit grind down their opposition. The earlier Roman confusion had presented an opportunity for victory that was capitalised on.

A Carthaginian victory with fate (in the form a battle setup and chance cards) going their way at critical times. From a Roman perspective Scipio the Younger did not save the day this time.  Rome was unlucky in this game losing the choice of deployment and drawing two confusion cards in a row at the height of the battle which really hurt.

What next for the campaign?

Well, with this defeat Rome cannot hope to win the campaign and so the campaign comes to an end.  Rome will be negotiating a peace treaty with Carthage.

The campaign began in July 2021 and has taken just over 9 month to complete.

I was pleased to have settled on some deployment rules. This was one area of the games I liked as it gave early decisions for the placement of units:

The importance of a unit's position increased when the unit frontage was increased from 8 to 12 inches. Pivoting of units became only practical for units positioned on the flanks and the 3rd line (if the 3rd line remained in place as the other lines advanced).

Finalised the approach for tabletop terrain setup. I used terrain cards, but changed the approach I used with my ECW campaign to make sure the about of terrain was limited and would not overcrowd the armies.

Through out I used chance cards and added rally cards replacing no event cards to represent larger forces. This meant all games were balanced in terms of number of units, 7 per side. I will be using this approach in future campaigns where suitable.

At the start of the campaign I increased the number of bases representing a unit from 2 to 3 giving a unit a 12 inch frontage. This had the effect of making units less manoeuvrable and increasing the importance of a well thought out deployment.