In March 1644 a Parliamentarian army marched upon the West Midland region. Recruitment had been successful for their army which had pay from monies raised by Excise Taxes. The opposing Royalist army struggled with recruiting and was the smaller force when both forces met near the town of Upper Windrush.

As both sides deployed their forces. The Parliament commander was mindful of previous battles where a stronger Parliament force had succumbed to defeat. The lessons learned from those battles were to engage Royalist cavalry early in the game to minimise their strike power. Even if this meant the loss of all their own cavalry.

The battle began about noon after both sides had settled upon their deployment. Parliamentarian cavalry pushed forward between the woods and the majority of Royalist cavalry charged them and soon took the upper hand in the ensuing engagement. This caused great concern and the Parliamentarian commander respond by moving his reserve lobster cavalry to support the cavalry engagement. Meanwhile on the other right flank, a strong force of Parliamentarian dragoons had moved onto the hill and soon saw off a weaker force of Royalist dragoons.

In the centre Parliament infantry, cavalry and artillery pushed forward in line with the woods. Once the cavalry engagement on the flank had ended with neither cavalry in the ascendancy, the centre pushed forward to be met by the Royalist centre. Musket fire was exchanged until both sides were out of ammunition.
Parliament's dragoons having disposed of their counterparts on their right flank started to engage the Royalist flank units supported by cavalry. Outnumbered the Royalist rolled their last dice (so to speak) and threw their cavalry reserve at the weakened Parliamentarian centre, which were able to just hold on. Any last chance of a Royalist victory disappeared, as their left flank units whittled down by dragoon musket fire routed as Parliament's cavalry charged.

A victory for Parliament to help redress the previous month's loss. The rest of 1644 is now looking promising for Parliament with an additional infantry unit being available for each battle fought this year, thanks to Excise Taxes.
Posted by Peter at 22:41 8 comments:

Having setup the tabletop for the next English Civil War campaign game I thought I would take the opportunity to layout and photograph the paper soldier Jacobite units I have completed so far. To these I am planning to add a couple more infantry units, a second cavalry unit, artillery units, and some commander figures.

On a previous post on the progress of these paper soldiers, a comment asked about the time it takes to create a unit. Each base takes about 15 minutes to complete ignoring drying times for the glue. An infantry unit with 9 bases takes about 2 and a quarter hours.

Now its time to pack up the units and play the ECW game.

The English Civil War campaign moves into April 1644 with Parliament's army marching on the West Midland region hoping to get revenge for the loss of the South Coast region in March 1644.

Both sides rolled for their order of battle with Parliament able to add an infantry unit.

Terrain cards decide the tabletop layout. The smaller Royalist force will be able to choose the side they wish to defend against a strong Parliament force.

Finally, off the cutting table (rather than painting table) comes another unit of Jacobites.

Over the last few days I have been cutting and snipping out the Paper Soldiers by Peter Dennis. Trying out different approaches to making them. As mentioned in a previous post the copies the figures I make were increased in size by approximately 50 percent so they stand about 40mm talk. This makes the cutting out much easier. 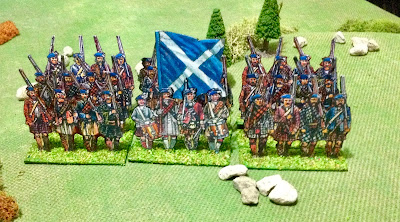 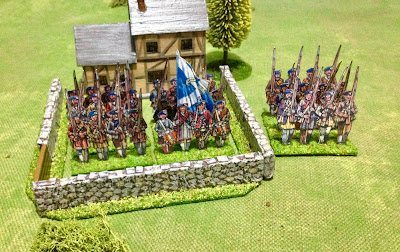 I am planning to make up a force of 10 to 12 units. The book also has figures representing casualties which I hope to use to track unit hits.

After the completion of last weekend's ECW game I decided to add a bit more terrain to the tabletop and play a WW2 game, where I was planning to try out some rule modifications. As it turned out, it was one of those situations where the rule modifications sort of worked, but generated more rule ideas and tweaks, and I ended up playing four WW2 games during the week all using the same terrain setup.

At the end of those games I have some modifications I can now write up, providing I don't get too caught up in painting and modelling.

On the modelling and painting front I seem to have landed myself with three projects underway. This is something I  generally try to avoid, as I would generally rather just focus on two projects, a primary one and a secondary project. The secondary project is used to provide a bit of variety when I need a little break from my primary project, and is arranged so it can be completed in bits without having half completed models lying about.

So what are the projects?


While waiting to start the second part of my WW2 Western Desert project, which is in the post, and without much thought, I merrily started the third project - Jacobite rebellion. Is this a really a problem? Not really, as the painting of the remaining WW2 Western Desert 6mm models, when they arrive, will not take long and I will be back to two projects. It is just that past experience which has taught me not to have too many half finished projects, and to focus my painting or modelling efforts.

Anyway, a quick update on the paper soldier project using the book "Wargame the Jacobite '45" by Peter Dennis. I decided to try increasing the size of the figures. Rather than photocopying to A4 sized paper, I photocopied to A3 sized paper which provides approximately a 50% increase in figure size. This makes them a tad over 40mm in height. I really like the drawings by Peter Dennis and they seem to benefit with the size increase (to my eyes anyway) and also as a bonus become much easier to cut out.

There will be more on the paper project as it progresses (with no need to paint tartan!)

The Royalist cause started 1644 by recruiting a marching army to challenge Parliament's control of the South Coast region. Parliament responded quickly and both forces clashed in March 1644 near the town of Nether Wallop.

Terrain cards determined the tabletop and both sides deployed. Royalist forces being the smaller force were able to select their preferred side for deployment and the battle began at noon with both sides edging forward to within musket range.


Another victory for the Royalist cause. They snatched from what appeared to be the jaws of defeat. Until the final turn Parliament would have won if they had been able to rout a Royalist unit, but it was not to be.

In October 1643 Royalist forces were able to grab a surprise victory and secure the West Midlands region. With only one month left of the campaign year, November, neither side was able to recruit sufficient forces to mount an attack before the campaign year ends in December. So 1644 begins with both sides controlling the same number of regions as they began with, Royalists 8 and Parliament 5. 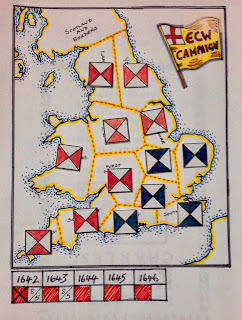 As the Royalists control the most regions they are able to make the first move and planned to march on the South Coast. A roll of a D3 dice determined the first battle to be fought would be in March 1644. 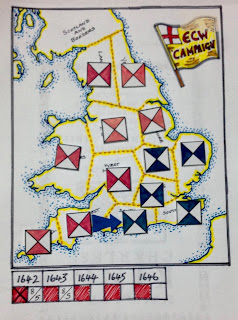 The draw of campaign cards revealed advantages for the Royalists with a well supplied marching army. While Parliament forces are struggling with sickness.

The recruitment dice determined the following orders or battle:

So all is set for this weekend's ECW game. Hopefully I will not be too distracted by the recent arrival in the post of some more paper soldiers.

My next project is the War of the Spanish Succession using Twilight of the Sun-King Rules and paper armies by Peter Dennis. The Jacobite rebellion and buildings were impulse buys.
Posted by Peter at 22:51 4 comments:

In searching for various spare bits to use on my sci-fi block buildings. I came across my American War of Independence (AWI) armies and thought it would good to get them on to the table top for a game. I have been playing a few games with the digital version of Worthington Publishing's game Hold the Line by Hexwar, which appears to be quite a faithful reworking of the boardgame, and thought I would try and use the rules on the tabletop. One hex would translate to 6 inches in the wargame.

Here are a few photos of one of the games. The figures are old Peter Laing miniatures.


I ended up playing a couple of enjoyable games using these rules and will most likely use them again for this period. Although I will see how they translate to a square grid, but for the moment the armies have been packed away for another day.
Posted by Peter at 21:42 10 comments:

I remember as a child building forts and castles out of my set of wooden blocks which were then fought over with my toy soldier collection. Often I was recreating scenes from whichever movie I had last seen. The advantage of these blocks was their flexibility. This level of flexibility is something my current sci-fi wargaming terrain does not offer, and making more terrain creates storage problems. So with toy building blocks in mind I have started building my block sci-fi terrain.

Over the last few weekends I have been cutting up a couple of 90mm x 90mm wooden posts into lengths of 90mm and 180mm. I have 16 blocks in all a mix of the two sizes but mostly the larger block size.

I am going to be gluing bits of Warhammer terrain onto the blocks, along with other items from the hardware store. The Warhammer terrain will help theme the building for my models and existing terrain. The plan is to use the blocks with my Necromunda gang figures for skirmish games.
Using a hot-glue gun bits of scenery and assorted items are stuck on. I don't worry about the pieces being flat against the block as they will get covered up later on, when I add 10mm x 10mm strips of wood.


Then out of MDF I cut some 150mm x 150mm and 150mmm x 240mm for the roofs and floors. With these flat pieces and the blocks I can construct different buildings.

Once all the block terrain is made I will start the painting and post the results in part two. A few weekends away I expect.