Continuing the WW2 Western Desert theme from my previous post, this weekend I set about making some brewed up tank markers for the terrain. I had been using just blackened pillow stuffing. While this looked ok, it was a bit too obtrusive as they had been originally made for my 20mm WW2 units. So I set about creating some very rough and ready 6mm looking tanks with some modelling clay. The type of clay you pop into the oven to harden. Then painted and attached some blackened stuffing.

The brewed up markers are used in modified Tank on Tank rules to block line of sight and visibility. These and other rule modifications are starting to settle down. My last big change was to start using playing cards rather than 2D6, and adjusted unit defence values up by one to reflect a greater range of results.

I hope to do a battle report soon, but do need to get back to my ECW campaign which has languished for the last few weeks, as this and the Jacobite paper soldier projects have taken up my wargaming time.

For my western desert terrain I have used felt to show the edges of depressions or wadis. The cut felt was coloured with paint and marker pens. I like felt as it adheres to the battle mat quite well and does not slip around during play. However, I had a feeling I could improve the look by added some model train ballast.
The first step was to put on a line of PVA glue and sprinkle on model train ballast. Once dry a light dry brush of sand colour is applied. Before covering them with a brown wash made of 1 part PVA glue to 4 parts water and a small amount of brown acrylic paint. This wash helps seal the top-side of the felt while the under-side remains untouched and still holds well to the game mat.

The end result makes the edge of the wadi or depression more rugged. The felt still retains a good level of flexibility at the end of this process.

The same approach was applied to create some trenches to show units in improved positions.

Two more paper units have been completed, a Jacobite unit and the first British unit. I have yet to decide how to make the artillery, flat or 3D option. My leaning is currently towards the 3D version, even though it may be a bit fiddly. Pictures of a constructed cannon in the source of these figures "Battle for Britain - Jacobite '45" by Peter Dennis look very effective.

I am pleased to be moving onto the British units as they are easier to cut out than the animated Jacobite units.

This past weekend I have been playing around with my WW2 Western Desert project and the effects of introducing dust clouds to increase the sighting distance for moving vehicles and reduce the sighting for stationary units. This in turn led to adding 'brewing-up' rules for armoured units which both restrict visibility and also provide recovery objectives and victory points.

Another change I tested out was the use of playing cards instead of dice (2D6) which the tank on tank rules use for combat. I keep the jokers in the pack and when one is drawn the game clock moves forward. Time on the game clock has an influence on visibility at dawn, dusk and the heat haze at mid-day.

The dust clouds, brewed up armour, and visibility rules are all influenced from my continued re-reading of Donald Featherstine's 'Tank Battles in Miniature - A Wargamers' Guide to the Western Desert Campaign 1940-1942'.
Posted by Peter at 22:23 6 comments:

During the week I played a couple of WW2 Western Desert games using my recently completed escarpments (see the previous post on how to make them).

In these games I am using rules from the game Tank on Tank with modifications to reflect the lighter armour and smaller calibre guns. Having recently re-read a chapter on visibility in "Tank Battles in Miniature - A Wargamers' Guide to the Western desert Campaign 1940-1942" by Donald Featherstone. Unit visibility was one area of the rules I want to add some house rules, to somehow reflect in the games the changing levels of visibility at dawn, evening and the mid-day heat haze, and spotting of moving vehicles with their dust clouds. The reason for wanting to add these rules was to create some specific rules which will hopefully give the games a different feel compared to WW2 game set in North West Europe.

My thinking at the moment is to allow a visibility to be limited to 3 hexes for stationary units and 6 hexes for moving vehicles. These would be reduced by a third when a heat haze is in effect during mid-day and reduced by two-thirds at dawn and with evening. Also, units on hills cannot see over units that are moving due to the dust clouds they create. They can still see over stationary units as per the rules.
Rather than using counters to show moving vehicles, stuffing from an old cheap pillow was used and dyed with a watered down sandy brown paint.

The other house rule added was for minefields. These require any unit entering a mined hex has to stop movement for that player turn, they may move again in the following turn. When targeted a unit located in a minefield with fire, the attacking units may re-roll any failed hit rolls.

This weekend's free time has been spent adding to my paper soldier Jacobite army and creating some escarpment terrain for the on-going WW2 Western Desert project.

With most of my WW2 Western Desert units completed. I am beginning to play more and more games with the recently painted Italian forces. One terrain type I want to add to the tabletop are escarpments. So with a fine weekend ahead it was a good time to try and create some for my hexed tabletop.
Now to setup a game using the newly created terrain.
Posted by Peter at 18:16 12 comments:

The Battle of Ponderbridge, July 1644, has a smaller Royalist force facing a larger Parliamentarian force. Being the smaller force the Royalists their commander chooses the tabletop edge to defend.

The Royalist plan was to move forward and attack Parliamentarian units as they crossed the bridge. Their cavalry was positioned on their right flank upon Wanderer's Hill, while their main infantry force was astride the main Ponderbridge Road.

Parliament mirrored these deployments, hoping the cavalry would neutralise their Royalist counterparts, and their larger infantry force would be able to force a crossing and defeat the main Royalist body before taking Ponderbridge hamlet.

The battle began early morning on a somewhat overcast July day, which from a wargaming perspective means the game will end after 12 turns.

Parliament's commander wasted no time and started to march is forces across the West and East bridges.
During the course of the battle Parliament continued to push units across both bridges. Royalist cavalry mounted charge after charge to stymie Parliament's plans at the West bridge. While at the East bridge Parliament was having a better time of it, and it was looking like they would break through the containing Royalist defenders. However, the arrival of a cavalry unit was sufficient to swing momentum in favour of the defenders.

As the day began to draw to a close both forces were engaged in a push of pike. Encouraged by the appearance of their cavalry Royalist infantry sprits lifted and they pushed back Parliament units which hastily retired.

A Royalist victory and most enjoyable game! And a somewhat unexpected victory when looking at the starting order of battle. Their battle plans came to fruition with the cavalry successfully holding off Parliament at the West bridge. While their infantry after initially crowding Parliament's infantry as they tried to cross the East bridge, finally pushed them back with push of pike.

Thoughts on the game...

1) Split forces limited the number of activations which is determined by the number of units a commander can see within 12 inches. This rule mechanism is aimed at limiting the level of coordinated attacks and hampered both sides throughout the game.

2) I modified the artillery shooting rule which no longer runs out of ammunition, but shoots now with D3-2 at ranges greater than half range and D3-1 at less than half range. If engaged in melee artillery are eliminated. I just need to update the rules and try out in future games.
Posted by Peter at 20:11 8 comments:

Having spent most of my free last week painting my WW2 Western Desert 6mm units and testing some WW2 rules. It was time for a change and have an English Civil War game. The last campaign game saw Parliament forces successfully march on the West Midlands and defeat a Royalist force in April 1644. In an attempt to recover from this setback, Royalist forces muster an army from their northern controlled regions and march upon the East Midlands.

Campaign cards were drawn for this battle. The cards were both themed for a particular side, and unfortunately were picked up by the wrong side. So neither side benefited. However, Parliamentarian armies are well positioned in 1644 and their armies will receive an additional infantry unit thanks to drawing an Excise Taxes card in the last game.

The armies meet in July 1644 and clash at the small town of Pondersbridge. I look at a digital image of an old 18th century map to come up with the names used in this campaign. Terrain cards are drawn to determine the tabletop setup.

The order of battle will be:


Finally, a quick photo of progress with my 6mm WW2 forces. They are mainly Italian units, plus a few British and German units as additions. 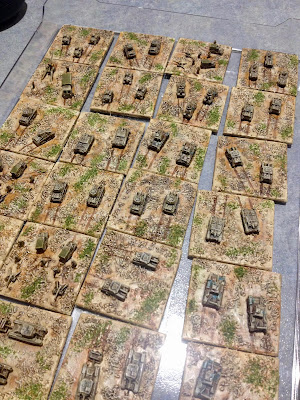 Progress slowed down this week on the Jacobite paper armies with the recent arrival of more 6mm WW2 Heroics and Ros models for my Western Desert project. The models are mostly for Italian forces with a few additional British and German models to allow for games in the later campaign years.


I have completed by my reckoning about two-thirds of the Jacobite units with just a couple for units and artillery to add. Then I can get started on cutting out the British army units once I complete the WW2 units, which should take me about two weeks.