As Christmas is a quiet affair for us this year with just one of the kids returning for the holidays. I was able to escape and play another game with my recently completed Napoleonic armies. I set up the forces and tabletop for a Caldiero 1805 style game. I am using the Command and Colour Napoleonic maps as a guide for both the terrain layout and force composition.

The house rules seem to be hanging together and providing an enjoyable solo game. Still a few more games will be required to help make sure the different situations that occur on a tabletop are covered. I had better write up the rules in their current state. As I will forget which of my many scribbles have been discarded if not done soon.

I must confess I am really enjoying play these Napoleonic games. The last time I played some Napoleonic games I would have been 12 years old with my yellow plastic Airfix armies stuck on bits of cardboard.  Never thought I would ever have my own painted armies to game with.
Posted by Peter at 13:41 4 comments:

A while back in August 2017 I listed all my painting projects. These are a combination of projects I wanted to do because of interest, or because I had a number of miniatures collected many years ago before I tool a break from wargaming. Producing this list was prompted by two blogs: Natholeon's Empires and Here's No Great Matter where there was a suggestion of a more project minded approach to painting armies.

Fortunately my projects are medium sized (I believe) due to the limitations of a 6x4 foot gaming table. There are only so many units which can be accommodated on such a sized table. This is a self imposed tabletop size, as it is easy to manoeuvre troops and I prefer games to be about an hour or so in duration.

Anyway, back on topic. I posted the list back in August. Looking at the list today I can cross off the first two projects as being completed.

Samurai - A very old collection of 25mm MINIFIGS which I am yet to start.

English Civil War - The plan is to repaint my old and partially painted Hinchcliffe 25mm miniatures. Yet to start.

Warhammer Age of Sigmar (starter pack) - Yet to start.

So which one to start on next? I exclude Warhammer 40K as this is my never ending project. One which I will often use as a filler or when I feel the need to do something different.

Before choosing the next project. There is one additional project which should be added to the list and is causing a dilemma for me - ACW (Spencer Smith miniatures). I have enough infantry, cavalry and artillery for a couple of armies, but I already have some painted Minifigs 15mm ACW armies. Rather than have two ACW armies in different scales. My present thinking is to create a couple of Victorian Science Fiction armies using these Spencer Smith ACW miniatures with various scratch built contraptions. Most likely they will be painted with a ACW theme along with walking Ironclads perhaps?

Currently my focus is on playing out my solo French Indian War campaign and devising rules for some Napoleonic games. Here are some photos of a recent Napoleonic game using some quickly produced house rules, which are an amalgamation of ideas from OHW and 2 by 2 napoleonic rules.

This week I have been able to finish off the last few cavalry and artillery units required for my plastic Spencer Smith Napoleonic armies. The painting is very simplistic and uniforms somewhat generic with a War of the Third Coalition look.

The figures are mainly old plastic Napoleonic miniatures with a few converted ACW figures and SYW artillery miniatures. I was hoping to add to the collection with a recent eBay auction of a few cavalry and old guard, but lost out in the last hour of bidding unfortunately.

A final few figures completed today added commanders and some converted standard bearers (as there are none in the range).

I started these armies back in early August and have over the last five months been able for the most part focus on painting them. Although there was one small diversion to paint WW2 Burma units for some Crossfire games.

It is pleasing to complete this project and be able to play a few games over the Christmas holidays.

Next year I may add to the collection with some new metal figures from the range. I really like the Hussars and another couple of units would be good.

Approximately halfway through the French Indian War campaign has the British retiring after their attempt to isolate the fort failed. Following this victory the French decide to take the opportunity and  launched an attack on the northern most British force. 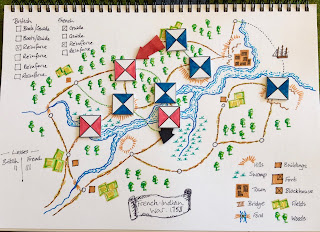 Game 6 used the recently modified rules. One of the things I like about campaigns is they keep me  focussed and playing a series of game as I work out the kinks in my house rules. In most cases I end up with a workable set of rules I enjoy playing.


Another victory for the French which now presents them with the opportunity to push British forces back to their starting positions.
Posted by Peter at 22:57 4 comments:

The campaign has the French retiring after a defeat a game 4. This was followed by the British moving up their unit positioned on the southern river bank to attack across the river, in the hope of isolating at the French garrisoned fort.

Using the campaign map as a guide tabletop terrain was setup for game 5, then forces selected for both sides.

The nature of terrain setup meant the battlefield was split it two by woods on both sides of the river. Both sides placed their artillery on hills. While French defenders benefited from a block house placed at a location of their choice, which was used to guard their right flank.

The river could be crossed at the road and two other fordable places known to both forces.

A victory to the French in game 5.

This game was played four times as I made changes to rules. Rather than playing out a new game to test out modifications, I just kept the terrain in place and started over again. I like quicker games (about an hours duration) so playing through a number of games over a couple of days is quite feasible. The results of the four games was split two wins on either side. I went with the first game result which was a French win.
Posted by Peter at 21:04 6 comments:

From playing the last few games of my French Indian War campaign. I have found my house rules may not differentiate sufficiently between how line infantry and skirmisher units operate. I mentioned this in my last post and a couple of helpful comments (thank you) were made. These comments got me thinking about things to change with the rules. But before making any changes. I am mindful that one rule change often leads to another rule change, and before you know it the rules have drifted from what you originally wanted or intended.

As I am prone to adjust and tweak rules. It was time for me get a tad more structured about the rules and avoid random acts of rule changes. After re-reading One Hour Wargaming and the chapter on horse and musket rules for inspiration. Where Neil Thomas describes the units involved before getting to the rules themselves. I thought I would try a similar approach and first describe (or in my case - list) how I want the units to operate within the game. By doing this and collecting all my thoughts before devising or changing any rule mechanisms. I will have a list of unit attributes I can use to check back on after test games to see if the rule changes meet what I intended.


Here is my initial "what I am looking for" list...


Away from the tabletop I have now painted all my Napoleonic infantry units and only have remaining 4 cavalry and 6 artillery units to complete.

This weekend I played the fourth game of my French Indian War campaign. Game 4 had a French force moving against a British force. Hoping to follow up on their last victory, where a British force had failed to storm a fort protecting the roads on the North side of the river.

Both sides had very similar make up (five line infantry units, two skirmish units and one artillery piece) and had also deployed in a similar fashion. Skirmishers on the flanks with artillery in the centre supported by line infantry.


The game ended with a British victory. Over the last couple of I have found my house rules do not  differentiate sufficiently between skirmishers and line infantry units. After a few scribbled changes to the rules I replayed the game. The result was the same. A bit more thinking to do I think.
Posted by Peter at 13:12 4 comments: