Back in January I made some movement trays for my 1066 paper soldier armies as the paper units (or the way I have based them) can be quite fiddly to move. This weekend I made a few more trays, smaller trays, for my War or the Spanish Succession cavalry and dragoons units.
Not much painting was done this past week as I have been on a short break. Having time away did allow me to read "The Last Crusade" by Anthony Bruce covering the WW1 Palestine campaign. This had lots of useful background and information on the battles for my current project.
Posted by Peter at 22:05 2 comments:

Unboxing some Sci-Fi terrain while on a short break

Browsing the local games shop I came across Tenfold Dungeon's compact tabletop terrain. They mainly produce fantasy style dungeons, but also produce one set with a Sci-Fi theme. The terrain is essentially a series of cardboard boxes of different sizes from which you construct a series of rooms and connecting corridors. I was going away on a short break and thought it would work well as portable scenery for my Necromunda under-hive collection.

One of the advantages of the boxes is the ability to store within my various figures and some extra terrain.

Along with the various sized boxes there are printed doors which fit into plastic clips. These are then used to hold the boxes (rooms) together. A very clever design. There were barricades as well which slot together. I opted not to use these as I was able to fit all my Necromunda scatter terrain into the boxes.

I use One-Hour Skirmish Wargames as my goto rules with a few modifications to suit the Necromunda under-hive setting.

I suspect I will be using this terrain at home as well as when away.

The WW1 Palestine campaign project is progressing well. I have now painted sufficient Turkish units for the One-Hour Wargame (Machine Age) WW1 forces which can have a mix of units types up to:
A standard infantry unit consists of four bases and a machine gun base can be added to represent the heavy infantry type in the Machine Age rules. There are a nice range of WW1 plastic figures available so I have been able to use camels for one of the cavalry units.

I am planning to paint some more Turkish units and am hoping to double the number and increase the unit sizes to six bases. For now though I will turn my attention to painting a similar mix of unit types representing Commonwealth forces. These will have a mix of ANZAC and Indian units which where involved in the campaign.

The Punic War land campaign turn 5 starts in Northern Italy where the opposing armies clash near Ateste in 210 BC.  A quick recap of the campaign lead up can be found here https://gridbasedwargaming.blogspot.com/2022/02/ancients-campaign-start-of-turn-5.html.

As neither side has an advantage in terms of numbers of troops or leaders, the standard chance card deck is used for each army. Both armies have 7 units per side which are generated from a table using dice (see here https://gridbasedwargaming.blogspot.com/2021/07/ancients-campaign-turn-1-game-1-tamaca.html).

Units are deployed with Carthage having lost the dice roll they start the deployment process first. They will as being the first to deploy get the advantage of making the first move.

Early moves in the game...

Middle stages of the game...

Closing stages of the game...

This was a very useful victory for Carthage as it will stop Rome from recruiting in Northern Italy in the next campaign turn. The campaign's attention will now turn to Southern Italy where Hannibal faces off against Scipio who has arrived on the scene. It will take some effort for Scipio to turn around Rome's desperate campaign position.

While the 2nd Punic War armies are on the tabletop, this post is about an online tool for printing hexed paper for drawing campaign maps. 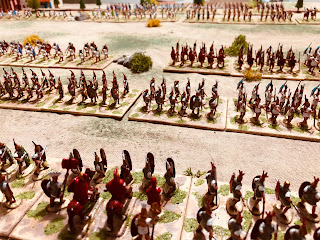 My wife, who is a Quilter, uses hexed graph paper of different sizes from time to time which are created on the site https://incompetech.com. Here you can create different sized hex prints from the section on graph paper. Be aware that there are a lot of ads on the site you have to navigate around to get to the Hexagonal Graph Paper PDF Generator. The generator allows you to enter the hex size, line colour, and paper size, then generate and download a PDF for printing.

This tool will be useful for creating some small campaign maps in the future.
Posted by Peter at 21:52 12 comments:

Email ThisBlogThis!Share to TwitterShare to FacebookShare to Pinterest
Labels: Maps

Running out of space and WW1 figures

The Samurai project is close to finish from a painting perspective. I have a couple of leaders to paint and that will about wrap it up. This is a good thing as I am just about out of space in my storage draw for the Samurai and Ashigaru figures.

The next steps for the project will be to modify the Basic Impetus rules hex to a square grid and also write up the One Hour Wargame variant I have been using recently.

Work has already begun on the next project, WW1 Palestine Campaign, starting with some Turkish infantry and artillery. I am expecting to progress quite quickly with this project as I am trying to keep painting to the minimum required. As can be seen from the photographs where grass tuffs on the bases are used to distract the eye from my simplistic painting style.

Finally, I have managed to get an article written and sent off in time for the next edition of Lone Warrior, the Journal of the Solo Wargamers Association. It is one of only two magazines I subscribe to. The article is called “Any Last Orders?” and the preview on their website says "Inspired by some older wargame writings and the idea of written orders, the author has developed a method that allows him to favor one side over the other when playing solo. Includes a set of American Civil War rules to illustrate the process."
Posted by Peter at 21:49 12 comments:

The Samurai project makes it to the tabletop

This week I finally got my Samurai armies on to the tabletop for a couple of test games. The first games were testing out a slight variation to One Hour Wargames (OHW) Pike and Shot rules. The changes were to have an Ashigaru skirmisher unit of bows attacking with D6-2 and treat mounted Samurai as cavalry attacking D6+2. Foot Samurai were swordsman and Ashigaru units as pike and arquebus (musket). One of the reasons for picking these rules is the combined nature of weapon types in units of this period and particularly the combined pike and arquebus units. Not something many rulesets seem to cater for.

These provided a couple of enjoyable games which did include the use of chance cards. Having only six units per side I was able to increase the side of units to six bases each and larger units always look more visually appealing.

It seems like a long while since I have had a gridded wargame on my tabletop. There should be more given the name of my blog. I did play a remote Samurai wargame, the Second Battle of Azukizaka, with Jon of Palouse Wargaming Journal earlier this year which used a hex grid. The gridded tabletop proving itself indispensable with remote gaming. The rules used were a version of Basic Impetus adapted by Jon to hexes.

So I decided to try a few square gridded games with the Samurai on 6 inch squares. Four bases each two by two inches fit quite nicely into the square and allow for terrain pieces to also fit. All being well I will be able to get another game played tomorrow.

As the painting side of the Samurai project is coming to a close, WW1 figures for the Palestine Campaign are starting to appear on the painting table.