Parcel arrives for my next project

While I have my latest English Civil War game on the tabletop and I am hoping to complete the game tonight, then get the game report written up at the weekend. All of this is providing I do not get too distracted by the contents of a parcel which arrived for my next project.

My next project is WW2 Western Desert using 1/300 scale miniatures by Heroics and Ros. I chose this scale partly as I think it to be more suitable for tank battles and the openness of the Western Desert terrain, and secondly for a change. I currently have 1/76 scale WW2 Northern Europe and did not really want any more WW2 armies in the same scale.

My current plans are to use a variation of the Lock 'n' Load's living rules for their Tank on Tank game. Units will be represented by two models on a 2x2 inch stand. In addition to basing and painting the models I will be creating the necessary terrain and tabletop cover.

I am looking forward to this project as I have never gamed in this scale before.
Posted by Peter at 21:04 7 comments:

As the English Civil War campaign year 1642 comes to an end. We see the Royalist and Parliamentarian causes fighting to control the last remaining region, Cornwall, before preparing for the coming year 1643. It will be in the years 1643 to 1646 where the campaign rules will change from just trying to control regions, to also trying to maintain a marching army to win major battles.

After this 11th game there will be a slight pause while I write up the campaign rules and make the chance cards for 1643-46. Along with finalising some adjustments to the tabletop rules, these being the current scribbles on my rule sheet. The purpose of the 1642 games apart from controlling regions was to help me play test and tidy up certain aspects of the rules.

So on to the next game which will decide which cause will control Cornwall. Royalists are best position because they control an adjacent region, and as a consequence will be able to re-roll one poor recruiting dice score.

Orders of battle are:

Terrain to be fought over was selected using cards. I will be continuing this approach in the next stage of the campaign. Each card represents a 2x2 foot area of the tabletop. The positioning of the terrain on the card, centre or corners is reflected on the tabletop. Roads get added after the terrain is placed, but have no influence on the game.

While I progress with the campaign my modelling has shifted for a short while to wooden ships. Another three rolled off the painting desk this week. I tried a dark brown, rather than black, on their hulls just to mix it up and also lightened up their sails. There are four ship yet to be painted and I also want to add a couple of frigates and sloops. This won't be happening this weekend, the weather is for rain and I only saw and sand MDF sheets outside due to the dust.

Steps on how the make these semi-flat wooden (MDF) ships HERE.

Parliament leadership decided to contest for control of the East Midlands. Recruiting between the rival factions had been fairly even with both sides fielding almost identical forces, Parliament had the slight advantage of one additional infantry unit. These forces clashed near the town of Irchester at Bakeman's farm. The battle began at the gentlemanly hour of 11am.

When setting up this game, somewhat late in the day, I made a mistake of allowing the larger Parliamentarian force select the side and setup first. Normally it would have been the smaller force. I didn't realise until halfway through the game and decided to keep going with the game as forces were pretty much evenly matched.

The couple of woods in at the centre were going to breakup both sides battle lines and create a series of individual battles. As the Royalist commander made the first move.

So a minor victory to the Royalist forces. This was an important victory which will give them control of the East Midland region. If they win Cornwall, the last region to be contested, in the next battle they will be in a strong position going into 1643.

Wooden (MDF) ships of the line

This weekend has been one focussed on modelling as it was some nice to be outside (and it was dusty modelling work). My next English Civil War campaign will have to wait until tonight.

Back to the modelling. A couple of months ago I bought Naval Wargames by Donald Featherstone, a bit of an opportunistic buy, and it is one of those books where I enjoy reading the odd chapter here and there and looking at the various old black and white photos. Anyway, as I have been adding a few units to my Spencer Smith Napoleonic armies I though it would be quite useful to add some ships for a future campaign. One of the photos in the book was of some home cast flat ships of the Napoleonic period.

Now I do not have any casting experience (yet) but do have a bit of modelling with balsa wood, MDF and cardboard. So with that in mind I thought I would attempt to create a semi-flat ship inspired by the original photo.

The following are a series photos going through the process for creating wooden ships.

That is the end of the MDF and toothpick work and it is time to move to the cardboard and painting phase.

I won't go through the whole painting process. Once painted the whole model got a coat of PVA glue to seal it and make it glossy. The finished ship... 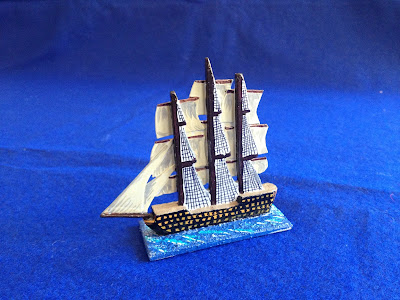 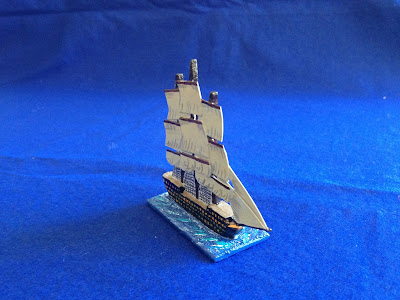 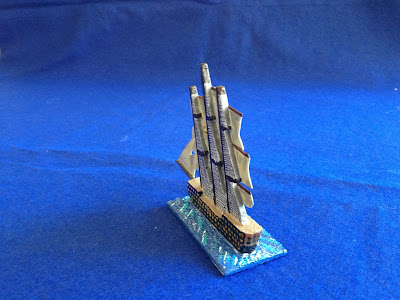 So far the production line has seven ships of the line and a couple of frigates all ready for adding sails and painting. Cost? Less than $5.
Posted by Peter at 16:31 16 comments:


Both sides were fairly successful with their recruitment i teh East Midlands and support from adjacent regions, and will enter the next battle with the following orders of battle:

As per usual terrain cards are used to determine the terrain features and their position on the 6x4 foot tabletop.
I hope to get to the game soon, but have first to complete a WW2 game currently in progress.

The battle of Birdlip Lane (1642) has a smaller Parliamentarian force take up a defensive position between Birdlip and some nearly woods. It was known that Royalists forces were in the vicinity and at mid-morning (around 10am) the Parliamentarian commanded from his vantage position on the hill could see Royalist forces deploy.


Parliament forces while being slightly outnumbered held a strong position and was confident enough to move forward their cavalry and dragoons to counter the Royalists pushing forward their cavalry and positioning the dragoons on the hill. The resulting cavalry action was prolonged as cavalry reserves were fed in by both sides. The outcome had Parliamentarian cavalry holding their ground and seeing off Royalist cavalry quite comprehensively. Soon afterwards Parliament dragoons moved forward to occupy the hill.

In the centre and other flank, Royalists pushed forward their commanded shot and a portion of their centre. The Royalist commander could not push forward his full centre because of his cavalry retreating and leaving him to shore up his left flank with his centre reserve. Even without the full Royalist infantry centre attacking them, the Parliamentarian centre was soon under pressure as both centres became locked in a push of pike struggle. The arrival of a regrouped Parliamentarian cavalry unit was enough to tip the scales in Parliament's favour and the Royalist centre retreated.

By late afternoon it was a Parliamentarian victory!

Not an easy victory for Parliament, even after losing their cavalry the Royalist force was a potent infantry force. One which did come close to winning in the centre. During the game both commanders struggled at various times to order their units as they became dispersed and in some cases scattered.

This victory secures control of the West Midlands for Parliament and will support the cause on the East Midlands region.
Posted by Peter at 16:57 7 comments: