The Ancients project painting has slowed down in the last couple weeks. This delay was partly due to the recent WW2 floor wargame, which was time consuming, and some Napoleonic wargames to test out a few rule changes. This week I managed to get the project progressing again with a couple of units getting painted and this weekend I created a game mat.

Over the last couple of years I have created a few game mats using material and paint. This mat is for an arid looking tabletop and to keep costs down I used a canvas drop sheet purchased from the local hardware store. This needed a good iron and trim before starting to paint it.

As I wanted an arid look rather than a full sandy desert look. I applied areas of a green wash, then later over sponged very carefully with a mid-green colour. Throughout the whole process of adding colour gradually I kept checking with a based and painted unit.

This is the last post on my WW2 floor wargaming efforts from a week ago. It relies on quite a few photographs to tell the story.

A quick reminder of the Allied plan. There are three objectives in the game:

The Allies aim first to control the beach them secure the objectives in the order above.

What D-Day style game would it be without some funnies? The Allies have a Sherman flail tank to help deal with the minefields and a hastily made Churchill AVRE Fascine Carrier to deal with the tank trap. 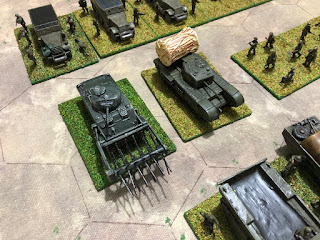 The beach landings began at 6am and went reasonable smoothly with only a few units from the first wave having to make second attempts to land. Each unit in a wave rolls a dice and arrives at one of the 6 landing craft representing landing areas on the beach. Only two units can arrive in a landing area in a single turn.

While the Allies had been securing the beach the defending Germans pushed up all available tanks into the second defensive line around the crossroads. More armoured reserves arrived on turn 5 and started moving forwards.

The second line of defence...

The German counterattack was a surprise to the Allies and further progress inland was not going to be easy. The loss of tank units was a blow and forced them to organised their armour and artillery into groups for the next advance. Grouping units together helped reduce the number of activation cards expended to provide artillery support and advance units.


The third line of defence...

This was such an enjoyable game. I set up the game Saturday morning and began the game Saturday afternoon and finished Sunday morning with lots of breaks to rest and do other things. It was great fun and a rare thing to get many of my 20mm WW2 units out and in a game at one time.

The other change limiting the number of activation cards worked well, and introduced a number of priority calls into the game for both sides. They also kept units together as attacking or defending groups, rather than having individual units moving all over the gaming area.

From a game perspective there were a few decisions caused by the rule changes and size of gaming area:

1) The limited activation cards meant both sides needed to group artillery and mortar units together to minimise the need to issue too many cards, and these groups delivered what seemed like bombardments.

2) The Allies took a very methodical approach of bringing up all available units, get the artillery in position, then attack. This took a few turns, but paid dividends in overwhelming defensive positions.

3) One of the most interesting decisions was whether the German counterattack should have pushed on rather than stopping and redeploying units to the crossroads. By pushing ahead there was a risk of losing the crossroads, but the reward would have had a tank units running amok in the landing area. It was one of those moments where it would have been interesting to replay from that point in the game.

In the end it was a victory to the Allies taking the town at 6pm as evening arrived on turn 24 (each turn is assumed to represent 30 minutes).

People's comments on my previous post highlighted some of the difficulties of wargaming on the floor. Aside from the careful tip-toeing to avoid standing on the miniatures, there is the constant getting up and squatting down to measure and to move units and measure shooting ranges. With that in mind I was using some very simple rules to make things easier. These rules have their origins in the One-Hour Wargaming WW2 rules. The two major changes are in the sequence of play which uses card activation, and shooting which has units eliminated upon taking two or more hits.

My current WW2 rules for the tabletop has individual activation of units. At the start of a game turn a card is dealt for each unit on the tabletop. Then units from both sides are activated one at a time starting with the unit with the highest value card (Kings) working down to the unit with the lowest value card (Aces). Using suit order for similar value cards - Spades, Hearts, Diamonds, Clubs. This works fine when there are only 12-20 units involved in a game, but I had more units than cards in a deck.

I chose to activate a units in groups. A up to 5 cards per side are placed on single units to represent orders to this unit and any nearby units within 6 inches. When it is time to activate the group, they all activate choosing to move or shoot as desired. The total number of cards is reduced based upon loses. When a force loses a third of their units only 4 cards are used, and this is reduced again to 3 cards when two-thirds of units are lost.

Once all activations are complete the game turn is complete. Deal out the cards again reshuffling the pack of cards if necessary.

The limited number of cards meant units tended to move as groups and in a staggered way as one group moves forward, then waits for support to catch up. There was also a need to prioritise between activating artillery support and keeping units moving forward.

Movement was kept simple. Units may move some or all of their movement allowance and may turn during their movement without penalty. There are no adjustments for moving through terrain and friendly units may pass through each other freely.

With combat normally I would track up to 8 hits on a unit before it is eliminated. With the number of units involved this needed to change as it would make combat a fiddly affair with tracking hits. Opting for 2 hits and you are eliminated would make tracking easy.

The procedure for combat is as follows:

2) Assess the effects a D6 and use the following combat results table. The first figure is used if the target is in the open and the second figure if the target is in cover. This combat table is based on the work done on on https://johnswargames.wordpress.com/2020/07/15/here-we-go-again-again/ with a few slight changes.

Units are eliminated after accumulating 2 hits, or more. Use a marker to indicate this, I use grey smoke to indicate units with 1 hit. I like leave armour in place when destroyed and mark them with red/black smoke.

By keeping the rules simple my aim was to keep the game rolling along at a reasonable pace and limit the need for me to move around the game areas too much by having group activations close together.

Next up is the game report as I sort through the photographs...

WW2 wargaming on the floor

This weekend my wife is away and when this happens there is always the opportunity to undertake some floor wargaming. Last time the floor wargame was of a D-Day style landing using "A Landing in Force" from "War Game Campaigns" by Donald Featherstone as inspiration (here). This weekend I have decided upon a D-Day style again using a scenario from "Operation Warboard" by Gavin Lyall. I have done by best to recreate the map from the book, but it has ended up being slightly elongated.

The book from the book was based upon a map of King beach in the Normandy Gold landing area.

Having sketched out a map the floor was cleared and various wargaming cloths used to set up the game. The playable area ended up being 6 foot by 12 foot. Pretty much all my wargaming scenery was consumed laying out the terrain. I did avoid putting down any fiddly terrain and lichen as I will be stepping all over the gaming area carefully watching where I place my feet.

The defending German order of battle:
The Armoured Car and Tank companies are in held in reserve and will arrive on turn 5.
The Allied order of battle is:
Wave 1
Wave 2
Wave 3
Throughout the game there will be artillery support available from the ships.
The game begins with the first wave of Allied troops arriving. To represent the difficulty of landing units where you want them to land. The following rules are used:

The German units are positioned on gaming area. Because most of the defending units are in prepared positions and I lack terrain to represent this I have used hedges to show units in prepared defence positions. They will be treated as being in cover.

The Allied plan is drawn up. It has three phases with three objectives:

The next couple of posts will be of the game and rules used...