With the blue cloth already spread out on the tabletop there was time for a second Galleys and Galleons game. This time we have a privateer galleon trying to sink a merchant ship which is being escorted by a Spanish galleon.

The Spanish start at anchor and cannot move until the Privateer comes into sight. Then they must first spend one move to weigh anchor before moving.


As it is very unlikely I will play another 6x6 challenge game this month. Here is my 6x6 progress as at the end of September:

Back to some 6x6 games on the high seas

After a couple of weeks messing around with some WW2 games, it was time to play some games from the 6x6 challenge list. So far I have not played any 6x6 games this month.

From my 6x6 list I have completed playing through five of the six rulesets, and only have outstanding the ruleset Galleons and Galleys by Ganesha Games. I played two games using these rules way back in April. Since then I have somewhat forgotten the rules, and so to remind my self of the rules my third game would be a simple affair with a privateer ambushing a Spanish Galleon.

Over the last couple of weeks I have been playing around with Tank on Tank boardgames rules on the tabletop. Getting in short games whenever I have had some free time. The games have been played using both with free movement and on a square grid, but mostly free movement. 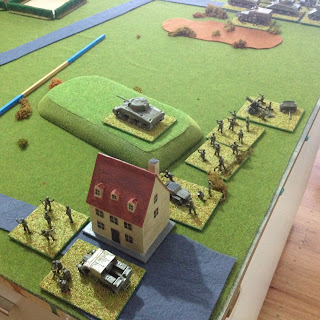 As much as a like the rules I could not help myself and made a few additions and changes here and there. Most of these are for limiting artillery and boosting the abilities of infantry. Not that surprising really when using a ruleset called tank on tank. The rule amendments which have not been discarded include...

1) One hex in the game was either a 6 inch move or a 6 inch grid square, depending if I was using free movement or a square grid.

2) Rather than use two D6 dice I used one D12 dice instead. This changes the odds making them even. This has the effect of improving the odds of infantry surviving a hits with a defence of 7 on the open and 10 in cover. While increasing the vulnerability of tanks with defence ranging from 9 to 11 depending upon tank type.

3) Artillery without Line of Sight can only support an attack if the spotting unit is either within 12" of the artillery unit or 12" of a leader unit. This was to limit the use of artillery by having barrages coordinated by leader units.

4) Mortar units can only attack personnel units and must be within 12" of the spotting unit.

5) Infantry can use 1 action point and improve their position when in the open.

6) Artillery and mortar units can provide smoke cover for a single personnel unit for 1 action point. The smoke lasts for the duration of the opposing players turn and if attacked the unit is treated as if in cover.

One of the blogs I enjoy reading and following the photos of painting progress is Palouse Wargaming Journal. Jonathan has been posting on his blog for 5 years now and is having a contest to celebrate the 5 years, closing 22nd September. The link is below: http://palousewargamingjournal.blogspot.com.au/2017/09/five-years-before-screen.html
In addition to just blogging Jonathan actively comments and supports other bloggers. So I am very happy to publicise this contest.

While much of my weekend has been spent working in the garden. I have been able to complete one unit of French infantry with a bicorne hat and have another just waiting for the base to be flocked. They are made from surplus ACW Spencer Smith figures and using a pose that is similar to their other Napoleonic figures.

On the gaming front I am still playing some WW2 games using the Tank on Tank boardgames rules modified for the tabletop. I plan to list down and post the handful of amendments I use later this week.

After the first three test jungle terrain pieces turned out well. I continued to build a few more using the same process with the hot glue gun.

I found some fern looking plants and added them to a couple of the terrain pieces.

I am continuing to get a few more units completed for my Spencer Smith plastic Napoleonic armies. I am attempting to use some of my surplus ACW figures and converting them with a bicorne hat made with green stuff.

With gaming I am continuing to enjoy playing WW2 using the boardgame rules Tank on Tank on the tabletop. A couple of modifications applied include using a D12 dice rather than two D6, and having to beat the defence score rather than equal it to destroy a unit. The aim of the changes was to improve the survivability of infantry in games where the many of units are infantry (foot, mechanised and mobile).

While I have yet to get on with painting my WW2 Burma armies for use with the Crossfire ruleset. I will begin that process once a couple of Japanese tanks which are currently in the post arrive. With that in mind I decided I had better start getting some jungle like terrain sorted out.

This weekend I purchased some plastic plants from a local craft and material store. The cost was about the $30 mark and should I hope make approximately 12-15 clumps of trees and vegetation. The plants can be both pulled apart, shaped and cut quite easily.

To begin with I though I would make three clumps of trees to test out the approach. The one really useful tool required for this is a hot glue gun used to glue and hold the plastic firmly and quickly once applied.

Here are my first test attempts...

3) The most important tool

4) The gluing
5) the completed item


I am happy with the test terrain pieces and aim to build some more over the next week or two.

A bit of WW2 gaming

Having recently completed my 19th Century campaign. I now find myself at a loose end and flitting a bit between games. For a bit of fun I thought I would try and take the WW2 "Tank on Tank" board game rules and apply them to the tabletop.

Tank on Tank is a light tactical game produced by Lock 'n' Load here. If you are interested there is an excellent write up on the game in the blog Battlefields ad Warriors. The rules themselves are available for download.

I basically took the rules as is and used 6 inches movement for each hex move or range in the rules. These rules are designed for quick and fun games and that certainly turned out to be the case with my first game.

I am planning to play a few more games and make one of two minor changes to try and bring infantry more into the game. Such as smoke to help provide cover as they are very vulnerable when not in cover. Not really surprising in a game called Tank on Tank.

My 6x6 challenge games for my 19th Century mini-campaign started with the One-Hour Wargame rules. These are my usual starting position before adding my own house rule variations.

Now that the campaign is over I have written up all my notes (see tab at top of blog) before I forget which notes apply and which were scratched. As you would expect these are fairly similar to the OHW approach to rules.

I always seem to be surprised how time consuming it is to write rules up and still after a few readings still find typo's and poor wording. I always got the "tried hard, but could do better" on my English marks at school. Anyway, here are some of the rule mechanisms I ended up adding were:

1) Not having cover influence the combat mechanism. Instead units are able to sustain a greater number of hits before being eliminated when positioned in cover. I used this approach with the AWI variant and quite liked it. As it means when committing a unit to defend a wood or building, they will invariably remain there defending once they start to sustain hits.

2) Adding variable movement. If combat is variable, there seems no reason why movement should not be. This did cause the rules to be free movement rather than grid-based. Not having a unit activation mechanism also cause me to use variations in unit movement.

3) Artillery is used to disrupt units, making it more likely for attacking units to score hits on the disrupted defenders. This means artillery is used more to support an attack, rather than sitting back and blasting the opposing units from a distance. The idea came from the “Waterloo a la Carte!” Napoleonic game found on the blog http://flagsofvictory.blogspot.com.au which has a number of rulesets/games.

4) Units are either in march (movement) formation or committed to a battle formation when engaged in combat. Units are easily deployed into battle formations without penalty, but cannot move until they change back to a march formation (which carries a penalty). Players need to consider having nearby reserves with which to exploit opportunities.

On the painting front I am slowly chipping away at my Napoleonic units. With the better weather slowing arriving I am now losing my painting time to gardening (not quite as enjoyable - but probably better for me).