In preparation for my next project, the WW1 Palestine Campaign, I painted a couple of units to help decide the best way of painting the 20mm soft plastic figures and also how best to finish the bases. For the baseI was originally just going to use a painted finish and my first test took too long and the effects were unsatisfactory. The alternative was to use sand, either a fine sand or coarse sand, and I tested these on a couple of units.

Out of the two tests, my preference was for the fine sand, but the bases looked a bit plain. I had a few grass tuffs stashed away which I added and these and they provided look I wanted. It was important that the finished base worked well with my arid tabletop cover I use with my Ancient armies as I wanted to avoid making another cover.

In terms of painting the figures I am opting for a very simple and quick approach:

I was returning some borrowed books at the local library today and saw "The Last Crusade - The Palestine Campaign in the First World War" by Anthony Bruce on the shelf. It has been on my list to get and I quickly borrowed it. If it turns out to be a good read I may try and buy myself a copy for future reference when creating campaigns or linked games.

This weekend has been a productive time for the Samurai project. The final bit of painting was completed on a unit of mounted Samurai. Additionally I made some palisades, wooden shields, a Torii (traditional Japanese gate to a shrine), and a traditional looking bridge.

The palisades were made from toothpicks and the shields from balsa wood sheets. The Torii was made from a small piece of 3mm MDF sheet cut out with a coping saw. The tiles are made with cardboard covered with gesso paste marked into tiles with a toothpick.

The bridge is a simple construction of a rounded piece of wood with sides made from MDF sheet. Just the basic bridge shape which is then painted.

It is time to revisit the Ancients (Punic Wars) campaign. The last time I played from this campaign was back in mid-January 2022 and saw a Carthaginian win. As usual the campaign turns begin with a naval battle. The winner of the naval battle gets to move second and has the advantage of responding to the other side's moves.

Having lost the sea battle Rome makes the first campaign moves for turn 5 covering the period 210 BC to 209 BC. This turn they will benefit from having the arrival of Scipio the Younger as a leader. He turns up at their time of crisis as Southern Italy is under threat from Carthage's armies commanded by Hannibal. Rome is able to recruit more legions from Northern Italy and marches one army down to Southern Italy.

Carthage responds by recruiting in Africa and shipping another army to Southern Italy. Further north one of their armies marches from Spain to Northern Italy.

The first land battle to be transferred to the tabletop will be from Northern Italy where the opposing armies clash at Ateste in 210 BC.

I am still painting my current Samurai project and another group of Samurai cavalry came off the painting table this week. There are a few more units to finish, even though my output has slowed over the last month or so. With the end in sight it was quite timely that my next project should arrive in the post.

The plan is to complete a couple of smallish armies for the WW1 Sinai and Palestine campaign using a combination of HaT, Emhar, and Strelets plastic figures. 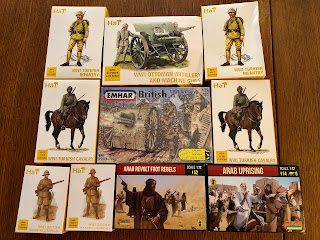 I have a few books borrowed from the local library which I am busily reading. They cover the campaign mainly from the ANZAC perspective and the involvement of Lawrence of Arabia and the Arab Uprising. One frustration is I have been unable to buy a box of HaT's Australian Light Cavalry and will have to wait until they are restocked. To compensate I did manage to get some WW1 Australian Camel Corp.

I am hoping this will be one project I can complete fairly quickly. I will be taking a very basic painting approach with all the figures. Any armoured cars, tanks and trucks will be simply scratch built. I am planning to paint and base a test unit this weekend with the Turkish infantry.

Where did this project come from? I am not totally sure, but I did see a documentary on Lawrence of Arabia over the Christmas holidays. Maybe the idea was swilling around in my remaining grey matter and finally crystallised at the beginning of February when the first of a number of online orders were placed.

Having just held off a determined Blue (French) action on the let flank it was now Red (Austrian) army's turn to assault with their Corps II with flanking support from their Corps III. Blue's reserves are severely depredated with only one cavalry unit available. If Red can win this action they will win the battle campaign by forcing an enemy Corps to retire off the map.

The action is transferred to the tabletop and forces deployed. The defenders are always required to deploy first. The action, as with all previous actions, is being fought using One-Hour Wargames Horse and Musket rules as written bar one change to the rules. The change allows for a commander to be attached to one infantry or cavalry unit. A commander's attached unit rolls two dice and selects the highest value for combat (shooting or melee).

The order of battle for this action has both forces understrength with less than 8 units.

They only have one cavalry unit available off-table and in reserve.

They have 5 flanking units which they can bring into the game, a mix of infantry, cavalry and artillery.

Blue as always in a tricky spot, starting this game understrength with few reserves to hang on for 15 turns. They lasted 10 turns before being overwhelmingly outnumbered.

The battle campaign is over after 5 enjoyable tabletop actions, but what would I do differently?

1) Running this style of campaign again I would make sure all the lanes on the map would have opposing forces (see here for explanation of map lanes). This would make the allocation of reserves an important decision. Any allocation of reserves would have to be carefully done, as once committed to a corps they cannot be returned. In this battle campaign the unopposed flanking corps essentially became a second reserve.

2) I would start all corps with 6 units, prompting the need for feeding in reserves at the very start.

3) To win an action on the tabletop meant reducing the enemy units to a level where they retired. I will revisit these rules and decide if there is an opportunity to include taking objectives (towns or hills) as another way to win an action, or at the very least sway the result.

4) From a narrative point of view I would have each move count as part of the day. For example, early morning, late morning, midday, early afternoon, late afternoon, eventing. If the battle remains undecided then there would be the option of a second day (both parties willing) and half the lost units would be recovered (rounding up).

As much is I want to begin another one of these battle campaigns, perhaps with an ACW setting, my Ancients campaign has been sidelined for a few weeks and needs attention.

The battle continues with Blue's (French) Corps III attacking Red's (Austrian) Corps I. Blue will be able to  bring on additional units from Corps I on their flank and from their reserves. Although, few units will be available from reserves as most of the reserve units were drawn into their previous defensive action (Napoleonic Battle Campaign Game Part 5).

A quick reminder on bringing on units to the table top:

Red (Austrian) starts the game with a depleted Corps I and a good supply of reserves to feed into the action. Should they lose the action, their Corps I will have to retire one step off the map which will result in a victory for Blue and the end of the battle campaign.

Initial deployments and order of battle...

On to the tabletop action...

I was not expecting Blue (French) to get so close to achieving a victory. Eliminating Red's (Austrian) artillery early on and bringing on a second artillery unit made things very deadly for any unit defending the hill. Also, the chance cards limited Red's ability to get many reserves arriving early in the game when Blue was applying as much pressure as possible with their attacks.

The next action will have Red Corps II attacking and hoping to win the tabletop action and battle.

Attaching backboards to the tabletop

In the comments on making the backboard I was asked how I attach them to the wargaming table? With my recently made backboards I have been just propping them up again a book or piece of wood. This works fine as the foam board (from with they are made) is very light and sturdy. However, there is the disadvantage of reducing the tabletop space by a few inches. Not a bit issue, but there must be a better way which would return the lost tabletop space.

Here is my approach for attaching a backboard....