Hurray! A sunny day to build some more sci-fi terrain

Finally, some sunny weather arrived this weekend in Melbourne and has allowed me to complete some more sci-fi terrain. A couple of posts ago I had a photo of the terrain setup on my normal sci-fi tabletop. This highlighted the need for some paved areas to cover up any areas of green on the tabletop. I don't mind some green in an urban setting, but it was too much for my tastes.

I already had some roads which I always planned to use. So this weekend I made up 18 paved areas of different sizes, and also finished off a nice big blue storage tank made from a coffee container.

I created the paved areas, as I have with most of the terrain, using photos of my existing terrain or screenshots of Warhammer 40K products and reworking them on Google Slides. Before printing and sticking them to the board I am using (see here for more detail on the process).

What is next? I still have to make a crane and I also want to add some chimneys. My fingers are crossed for another sunny day tomorrow. I had hoped to get a start on the chimneys today, but the garden was in desperate need of weeding.
Posted by Peter at 16:56 6 comments:

A mix of wargaming activities

My original plans this past weekend was to get close to completing the wooden block sci-fi terrain, but this had to be deferred due to continuous rain. As an alternative I began by painting up a few more Necromunda figures and prepared for the next WW2 Western Desert campaign game.

In the last campaign game the attacking 21st Panzer division was repulsed by the South African infantry division in defensive positions. Axis forces have a mobile reserve waiting for a breakthrough and now are having to make an attack using one of their Italian infantry divisions. This game will be played later this week once I have finished gaming with my War of the Spanish Succession paper armies, which currently occupy the tabletop.

When Sunday continued to be a wash out weather wise. I opted have a War of the Spanish Succession game and give some simple rules I had written a few weeks back another go. For the game I thought I would tryout the Battle of Wynendael, September 1708, from the book "Battle Notes for Wargames" by Donald Featherstone.

The battle took place during Marlborough's campaigns in the Low Countries. The action was between an allied force protecting a convoy of supplies required for the Siege of Lille and intercepting French forces.

Allied forces under command of General-Major Webb were 6,000 infantry and 1,500 cavalry. French forces commanded by Count de la Mothe consisted of a mixed force of 24,000 men. Webb was aware of the French and chose a defensive position flanked on both sides by woods.

The battle notes suggest French morale should be viewed as poor and their commander considered below average. As the rules being used don't dice for morale, I opted to reduce the effectiveness of French shooting in the game. In addition the French cavalry would not attack unless attacked or any forces came within each of a charge move to represent the below average commander.

The game followed the account of the battle. This was mainly due to the reduction in the effectiveness of French musketry. Without this adjustment it would have been a definite French victory. Historically this was an important action which allowed the convoy of supplies to get through to the siege of Lille by Marlborough.

I have been slowing working away at some smaller scatter terrain pieces for my sci-fi terrain project. Adding the all the scatter terrain that came with the Necromunda boxed set and added a few extra pieces made up from leftover pieces saved in my bits-box.

My aim with all this wooden block terrain (see previous posts) is to try and create a multi-level tabletop similar to the original Necromunda set without spending much.

On my to do list of remaining items are the following:

By pavements, I mean grey sheets of MDF board to cover up more of the tabletop which has a tad too much green for an urban setting. Well, for my liking anyway. I will take the opportunity to add some black and yellow hazard lines to introduce more colour to terrain.

If you are wondering which rules I will be using? It's the "One-Hour Skirmish Wargames" by John Lambshead. I have used them previously with a few additional character and weapon rules to reflect the Necromunda setting, and find the rules play fast, are easily remembered, and fun to play. They use playing cards rather than dice which I quite like. 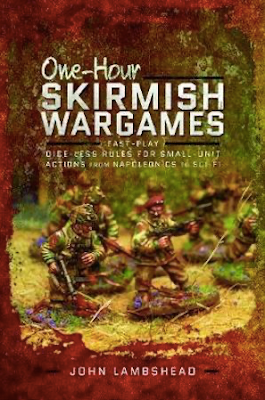 Once I have completed the terrain and possibly a few more figures. A campaign will be setup using the snakes and ladders approach (last used with a Jacobite campaign - see here) which seems most appropriate as the gangs will work their way up the city hive to find riches.

I have finally got around to writing this battle report, the first game of campaign turn 7, a game I played a couple of weeks ago. I have been spending too much screen time with work and all, and have deferred spending the time to write this post.

The map below shows the campaign setup. In this turn I am using the modified rules with mobile reserves to exploit any breakthroughs (see Campaign Rule Modifications post for details). During the first part of this campaign turn both armies diced for supplies and were able to replace their lost equipment. The Allies had sufficient supplies to fortify the South African infantry division with additional defences.

The opening attack was by the 21st Panzer division who advance to find they are up against the South African division in fortified positions.

Elements of South African Infantry Division in a defensive positions...

The Allies are well positioned along a series of ridges with infantry in fortified positions in front of the ridge. Most of their AT units are positioned in the centre covering the road. Both sides have a third of their forces off-table in reserve.

The Axis plan is to attack on their right flank with a light armoured force of armoured cars and armoured infantry, while their main armoured thrust will avoid the AT guns and slant across to the fortified infantry positions in front of the ridge and objective.

Axis air support had limited success and the attack on the main ridge was called off allowing units to reorganise. The right flank attack quickly became disjointed and a lone Allied armoured car unit destroyed double their number, causing the attack to stall.

Having had the initial attacks repulsed. Axis forces regrouped and waited for reserves to move up and join for a second assault on the ridge. Their preparations are interrupted by an RAF attack which swiftly destroys a unit of tanks and supporting Wespe artillery units. This further delayed the second assault.

It took a while to recover from the air attack and plan for a second assault. The planned assault when it came was a simple one, charge down the road and attempt to storm the position. The attack took defenders by surprise and the Panzer units successfully breached their position destroying AT and tank units. This was not without loss. Desperate defenders fought back and were gradually able to halt the attack's momentum, eventually forcing an end to the second assault.

An Allied victory which will mean the next Axis attack will come from one of their Italian Infantry divisions. The Axis offensive may well be coming to an end, offering the opportunity for the Allies to launch a counter offensive.

This weekend I was able to complete some more wooden block sci-fi terrain. On my list was a series of low walls, elevated walkways, and pipes. The walls all were cut at 45 degrees to try and give them some shape and not look too square, while the pipes each had a square piece of wood cut and stuck on one end. This square was added so the pipes don't roll around on the tabletop. 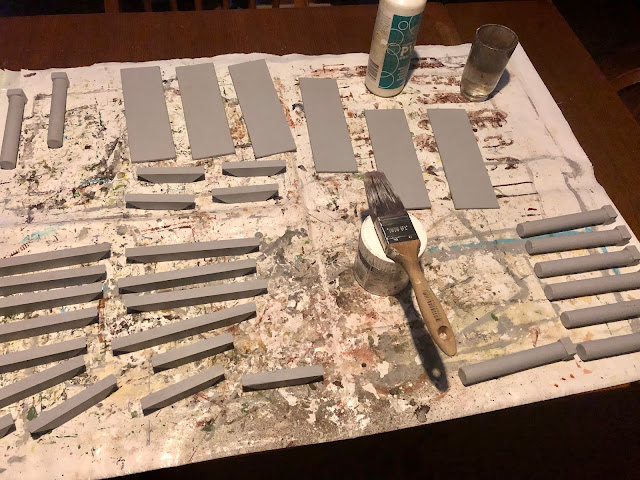 The wooden walls, walkways and pipes were painted grey, printed features stuck to them, and a black wash applied. 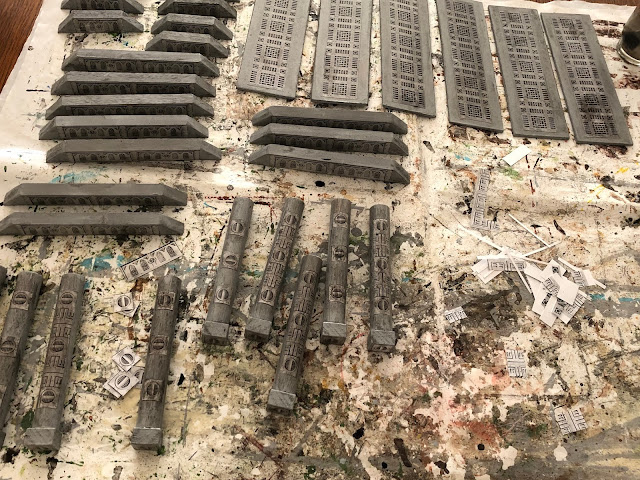 The next step was adding some pastels to look like rusk and weathering. Followed by a coat of PVA glue as a sealer. 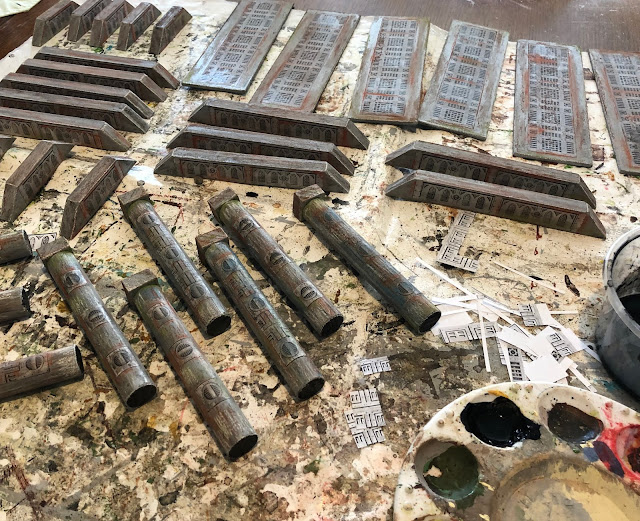 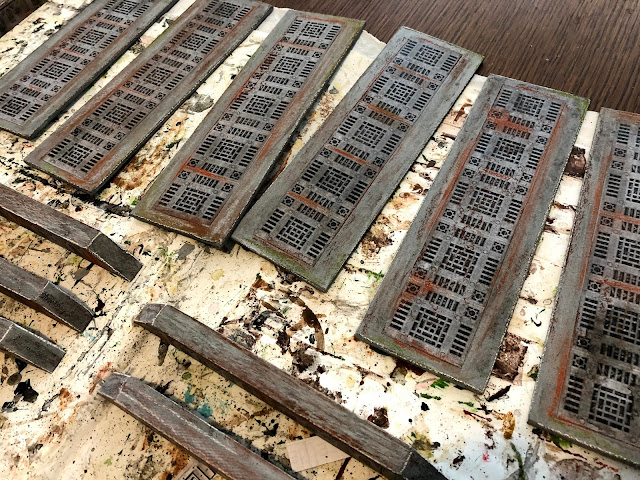 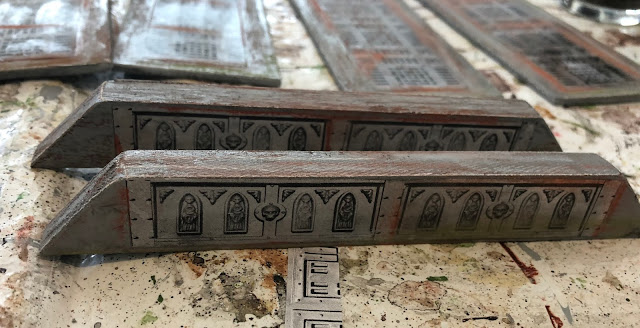 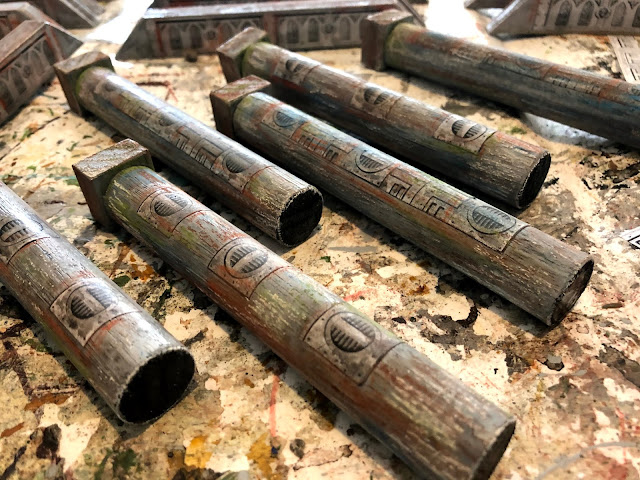 The additional bits of terrain are sized to be used with the buildings finished the previous weekend. 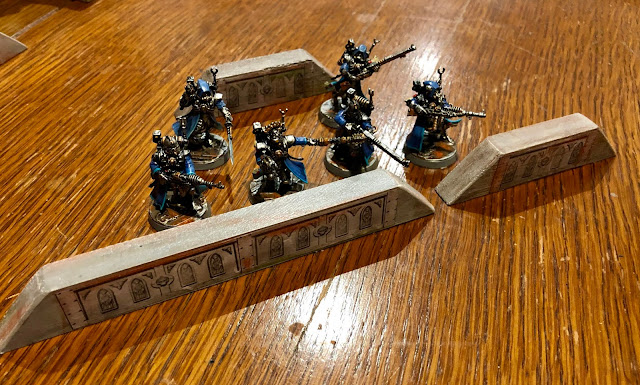 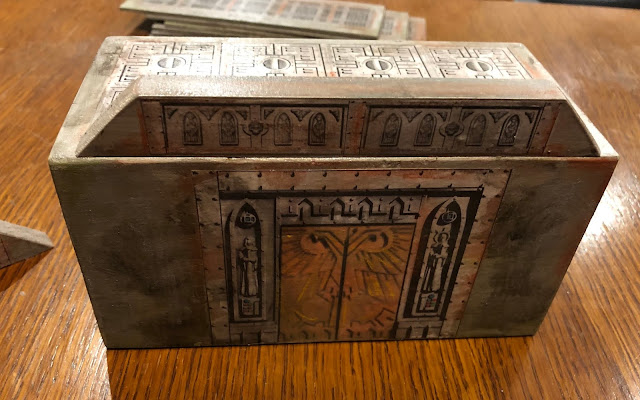 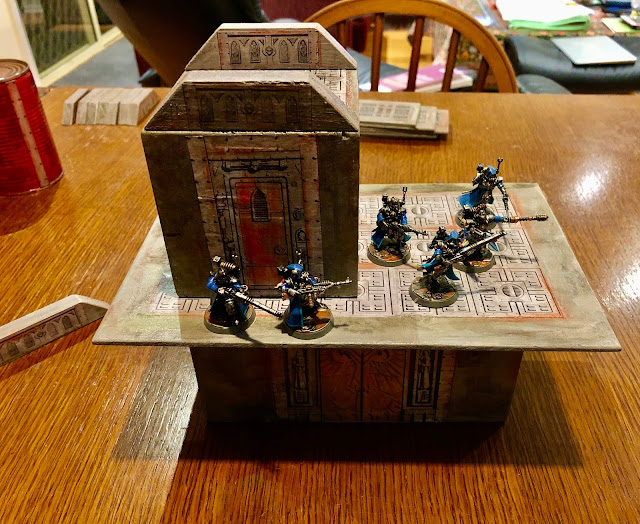 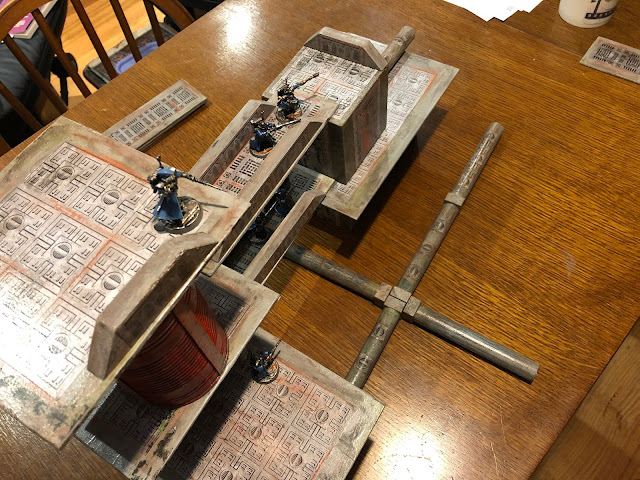 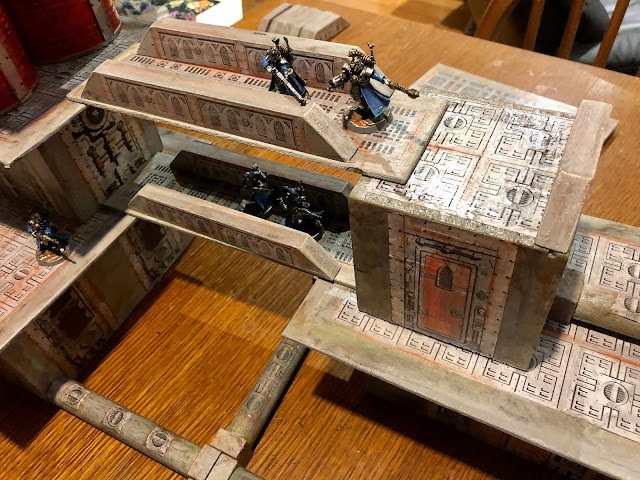 Next weekend I hope to make few more storage tanks and some other scatter terrain.
Posted by Peter at 21:59 10 comments: