Still messing around with rules

Last week I continued to tinker with my grid-based sic-fi rule set. However, in between playing games to test rule changes I did get a chance to add to my Chaos army with a Defiler (here's a picture). 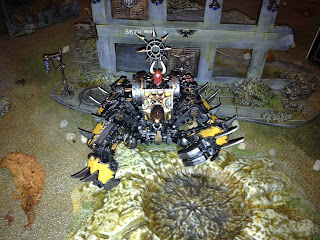 In my rule tinkering I started looking at weapon strengths which in turn led to changing how hits are determined. Hits were determined based upon experience and whether a unit has any terrain advantages. I'm now trying out not differentiating hits with experience, and letting the more experienced unit take its action first unless overruled by a terrain advantage. This has led to an increase the levels of experience to make this work. You make one change and it leads to less to other adjustments.

Over this week I'll write up my changes (if they work out).

After a couple of trial games I updated the activation rules and tried some other changes to the weapon types, but decided it was over complicating things and went back to what I had. While working on the rules I reworked how the rules were written. These are available for download.

Having finished reading "Designing Waragmes - Introduction" by George Phillies while travelling this weekend. I picked up "Fire & Stone - The Science of Fortress Warfare 1660-1860" by Christopher Duffy.

Having completed a campaign using my grid-based rules, I decided to rework the approach to activation. Currently, the game is played in a series of turns as control is passed between players. When in control, a player’s units can undertake a series of actions, against which the non-controlling player’s units can react. The reaction normally taking the form of shooting at units which are being moved.

By throwing activation dice in batches, players can get a unit to carry out multiple actions in their turn. The downside, or risk, is the fewer dice thrown increases the likelihood of not rolling a 3+ and passing control to the other player.

What I found was you inevitably roll the dice in two batches of three, and only on rare occasions was a third batch thrown. A nice idea, but didn’t really work. So, I thought I’d try an approach used by other rule sets, where you roll just one dice to determine the number of units you can activate. To allow for units to make multiple moves and without one unit always being moved, activation is phased:


For example, an activation dice roll of 6 could allow a unit to fire in phase one, regroup in phase two, and fire again in phase three. In my rules any combat requires a regroup action to be performed before any further actions are undertaken. Movement between zones does not require a regroup, so a unit could move three zone by moving in each phase.

An activation dice roll of 4 would allow three unit actions phase one, and in phase two either a second action by one of the units, or a fourth unit be activated.

I am now updating my rules and trying to work in the intervention rules and types of actions into this change of approach. Along with any other hooks I may have not considered which this change.