The Battle of Fort Oswego, September 1758, has French forces commanded by Contrecoeur attacking a similar sized, but less experienced, British force commanded by Amherst. This is a major battle and its outcome will have a level of importance for the on-going campaign being run by Jonathon at Palouse Wargaming Journal.

Each regiment is represented by 2 units on the tabletop and the following order or battle was used:


The French arrive on either end of the tabletop and must split their force evenly.

The early moves has the French advance on either flank and engage the British outside the fort.


The middle game has the direction of attach shift towards the fort.

As the game moves into the end stage it is in the balance with neither side having a clear advantage.

A marginal victory for the French thanks to their Grenadiers and careful management of their units. Retiring any unit which where close to elimination. It did look at one point they had over stretched themselves with attacking fort on two fronts.

Losses on the tabletop were:


All in all a very engrossing game which went down to the wire.
Posted by Peter at 18:07 6 comments:

My plans for this weekend's wargaming is to get around to play the next game in the French Indian War campaign. Jonathan posted the campaign moves leading up to this game earlier in the week (see Palouse Wargaming Journal) but I have been busy playing some Napoleonic games during the week and shrinking my rules (see later).

Fort Oswego has been fought over a couple of times already in this campaign. However, there is a slight twist this time. Jonathan has noted that the French start out as a split force are arriving from the West and the South. This has been translated to their units arriving on opposite ends of the tabletop.

The British forces commanded by Amherst cannot be positioned within 4 squares of either flank, where the French are expected to arrive. On my 6x4 foot gridded tabletop this translates to 24 inches. Amherst also benefits by having one artillery piece which must be located in the fort and can have two prepared positions of earthworks.

The French, commanded by Contrecoeur, must split their force evenly. They also benefit from having one artillery piece. Looking at the orders or battle I expect to represent each regiment with two units on the tabletop.

During the week I finally go to write up my D3 napoleonic rules based on One Hour Wargaming Horse and Musket rules with a few modifications particularly on how cover is dealt with and the more oblivious use of D3 dice (1,1,2,2,3,3) where combat results are either below average, average or above average. As my current interest I shrink the rules into a booklet (ezine) form, which is fun but also means transferring them from a document to a presentation format.

These rules do not presently use a grid, something I may change later on. If you are interested in the changes here are the rules as they currently stand. The modifications are mainly around:

They are geared towards games with 12 to 24 units per side.

All units are singly based and represent the following unit types:

Players take alternating turns to move or shoot their units. A turn has the following phases:


Unit may move up to their movement allowance, but never exceed it.

All movement must be in a straight-line.

Units may pivot on the centre at the start & end of their movement.

Movement must cease once a unit comes within 6” of an enemy unit. Unless the units is moving directly towards an enemy with the intent to charge them.

Infantry & artillery units engaged in combat or within 6” of an enemy unit cannot move, but may pivot to face an enemy. This counts as a move.

Cavalry & skirmish units are allowed to disengage from enemy units.

Skirmishers & artillery may move through other units.

Once a unit is within 6” of an enemy unit they are considered to be engaged in combat & cannot disengage until the enemy is removed.

Cavalry & skirmishers are the only units which can disengage providing they move away & do not move within 6” of another enemy unit.

Only units that did not move can shoot.

Units must have a clear line of sight.

Roll the dice to determine the number of hits:


Any target cavalry or skirmish unit can retire their full move to reduce the number of hits they take by 1.

As soon as a unit shoots place a marker (eg cotton wool) to show it has been engaged in combat. The unit may not move unless it can disengage or the enemy are eliminated.

Note - See elimination section for how cover is dealt with.

Only cavalry can engage other units by charging. This occurs whenever cavalry moves into contact with another unit.

The attacking cavalry unit rolls D3+1 for the number of hits which are modified by the following:


Artillery units are eliminated if charged & are not within 3” of any infantry unit. If within 3” then they are treated as unmanned until the cavalry move away.

A hit represents a combination of casualties, exhaustion & disorder caused to a unit by combat. Units are eliminated when they exceed 6 hits.

Units in cover can take 12 hits before being eliminated. However, once a unit in cover has taken 6 hits they are not allowed to move.

The loss of a veteran unit deducts 2 from the army resolve.

Units can form into a square during their move. When in a square they cannot shoot & cavalry cannot attack them.

An army's resolve is equal to half the number of units & plus 1 for the General, rounding up any fractions.

Each unit is eliminated reduces the resolve by 1, or 2 if a veteran unit.

Once an army’s resolve is zero, the game ends & the army retires from the field of battle.

All armies have a commander.

Commanders which do not move during a turn can issue move orders to all units within 6”. These units are allowed to move an additional 6”.

Commanders cannot be engaged in combat. If an approaching enemy unit comes within 6” they must move away during their turn.

A couple of books on the English Civil War

Painting of my English Civil War units has stalled this week. All due to me straining my back doing some gardening at the weekend. Sitting for any length of time at the painting table is proving problematic. However, a couple of second hand books on the English Civil War arrived sooner than expected to add some cheer to the week. 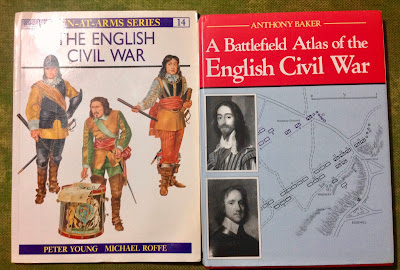 I have only had a chance to browse through the Battlefield Atlas. It has some very nice maps of the movement of forces prior to battle along with detailed maps of the battles themselves. These will provide inspiration for some mini campaigns and wargames, once I get back to the painting table to complete a few more units for a One Hour Wargame style game.
Posted by Peter at 23:15 4 comments:

Having messed around during the week tweaking some Sci-Fi skirmish rules. I wanted to play a different period. My choice was between a WW2 and Napoleonic game. In the end it came down to a napoleonic game and I hopped on to the Command and Colours website to view their battle maps for ideas.

After a quick browse through the options I settled on playing a game based upon the Battle of Jena (18 October 1806 - early morning). I say based upon, as the Prussian forces will be represented by a combination of Spencer Smiths miniatures looking vaguely like Austrians and Prussians.


The Orders of Battle are slightly different to those from the Command and Colours site. Due my armies to not having quite sufficient numbers of cavalry units.

The planned tabletop layout was sketched out based upon the command and colours map. The Prussian forces can deploy up to the halfway point of the tabletop. While the French within 12 inches of their base edge.


The deployed Prussian forces were split into two as they occupied Closewitz and Lutzeroda. The French were deployed more to the centre.

An enjoyable game to play this Sunday morning prior to heading out to the garden. The command and colours maps provide a useful source of ideas for battles which can be quickly set up.

For the next campaign game we have a French force under commanded by Drucour attacking Fort Stanwix. As ever the operational moves and campaign background are to be found on Jonathan's Palouse Wargaming Journal.

August 1758, The Battle of Fort Stanwix

For the tabletop setup I was able to reference photos from campaign Game 8 where Fort Stanwix was previously fought over.


A useful victory to the French who were able to coordinate their attacks on the fort.