Playing around with SciFi rules

Over the last week I have been working through some light weight science fiction rules. Most of my focus has been on the movement and combat side of rules, and adding different activation mechanisms. First from Ganesha Games Swatters rules and later from Tank on Tank by Lock ’N Load Publishing.  I like both mechanisms and will probably switch between the two in the future.


Anyway, I have written up the rules based around the Tank on Tank activation using their solo approach for activation with dice rather than drawing chits. They can be found on the above tab.

I will come back to these rules in a while with a fresh set of eyes. Which is something I will be doing tomorrow with some grid-based ACW house rules influenced by one-hour wargames.

This weekend I went shopping with the wife to a craft and material shop. I often tag along as I often find I can pickup one or two modelling items. This week they had plastic and material flowers on sale. In the past I have used these as vegetation for my science fiction terrain, so it is always worth while having a look for something new. This week I found a fake plant I can use as an alien tumbleweed. All that was required was to pull off the fake seedpods.
I also picked up some cheap skulls from the halloween section which I will use in some 40K Chaos terrain feature.
The reason for all this SciFi stuff is I have been playing around with Tank on Tank rules (available for download here from Lock 'n Load Publishing). I like activation approach used in these rules and so have been trialling this approach to activation with my W40K miniatures using a different combat mechanisms. So far they seem to be working out ok. I am still writing up my notes and will post the 1 or 2 page rules later this week, assuming they continue to work out with some more play testing.

I am also very tempted to collect some western desert WW2 figures and tanks to use these rules on the table top. The rules use between 8 to 12 units so with a bit of unit variety this could work out to about 20 units per army to collect. Hmmm. Christmas ideas perhaps?

Over the last few weeks I have slacked off a bit when it comes to painting, spending most of my free time wargaming. So this week it is back to painting up and basing my Hundred Years War Minifigs.

I have now learnt to leave a space at the back of the stand where I can place dice to track casualties. So I no longer will have to move the stand and dice. I intend to use Lion Rampant rules and will track the 12 casualties with two dice. I prefer moving big bases of figures about rather than individual figures. If I am short a figure of two to make up a unit, I am able to thin out the ranks and have 10 or 11 figures on a stand.

This weekend I was able to fit in two WW2 games to continue my campaign. Both games had the Commonwealth forces making limited attacks.

Game one saw Commonwealth forces launching an attack on a built up area. In the opening moves they quickly secured the first set of buildings and pushed in to the surrounding woods on the flank. Alerted to the attack, German reserves quickly arrived and the armoured advance stalled.

At the end of the game Commonwealth forces were able to hold on to their gains in the face of determined German counterattacks as secure a narrow victory.

Game two, had Commonwealth forces attacking again, but this time in terrain which was more open. The opening moves were very successful for the Commonwealth with their air support eliminating a Jagdpanther while infantry advanced into the woods towards the waiting German pillbox and minefields. Other than a swift armoured advance to take the hill it was hard going making any advance along the road and against the German defence line, as defending units were steady fed into  he line to bolster the defence. By games end the attackers had failed to hold all their gains as a final push by German defenders denied the Commonwealth forces a victory on the last turn.

In both games I used air support. In game one it caused no damage other then keeping German units within 2 squares of their AA unit, and in the second after a stunning start it failed to follow up on the success. The rules below are not set and an area of the rules I have changed a number of times this year.

After working on my ACW house rules for the last few weeks and testing them out with some games it was time to put them aside, do something different, and come back to them in a week or two with a fresh set of eyes.

Having completed building and painting my Wespe kit it was timely to get back to my WW2 campaign which is entering its final phase. In the last game Commonwealth forces had failed to achieve their objectives with a limited attack. The German forces declined to counterattack so Commonwealth forces decided on a second attack nearby. 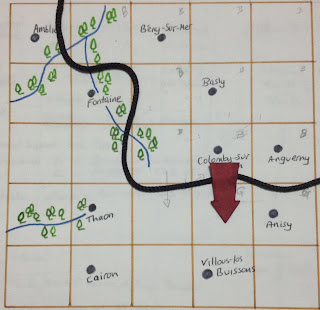 Both side rolled for their forces and organised half of their units as reserves. The defenders had 12 units and the attackers 18 units.


The dice generated terrain provided an interesting challenge for the German defenders with buildings on either flank. Fortunately both were placed within the defenders troop placement zone. Victory goes to the side with the most points based on terrain features controlled or occupied at the end of the game. Buildings are 4 points compared to woods 2 points and fields 1 point. So they are important features to be held.

The attack on the German right flank slowly made headway as the defenders held out by steadily feeding in fresh units. The surrounding woods were providing useful cover from which the attackers could launch attacks.

The German right flank appeared to be well defended as the armoured attack moved forward. A combination of accurate Commonwealth artillery barrages and no German barrages due to a lack of ammunition, helped the armoured attack take the buildings and pushed the defending Germans on to the back foot.

On the right flank after some stubborn resistance the German's ran out of defending units and the Buildings were occupied by Commonwealth infantry units. The defending forces still held the centre wood, but with the loss of both building squares it was a victory to the Commonwealth forces.

During this game I was able to test out the changes I had made to the unit regroup rules. They seemed to work well and will remain for the present. I will also be adding the optional intensive fire rule for artillery and mortar units after reading through the PanzerBlitz rules recently.


Intensive Fire - Artillery and mortar units can expend all remaining ammunition in one barrage before retiring from the field. When they do so, any hits during this intensive fire causes the target unit to be destroyed.

I plan to get a couple of more WW2 games in before returning to some SciFi games and writing up my SciFi rule notes.

This week I have continued testing and modifying my house ACW rules inspired by One-Hour Wargaming rules. These rules can be found on the page tab above. They include:


As with many of my attempts at house rules these are grid-based rules which use a 6" square grid.

My gaming table is 6' by 4' so I have a playing area of 12 squares by 8 squares. This is fairly close to Battlecry's gaming board 13 hex by 9 hex and most interestingly the large range of scenarios/maps freely available here.

So I am now going to slowly work my way through these ready made scenarios having started with Second Bull Run, Virginia Brawner's Farm, August 28th 1862.

I started with a quick drawing of the Battlecry map converted to squares to assist with setting up the game table and placement of units. Fortunately I had just enough figures to field the required number of units. The game played quickly over about an hour.

This week I have spent mostly reading 'Rally Once Again' and continuing to mess around modifying some house ACW grid-based rules which use One-Hour Wargaming mechanisms with one or two additions. They are pretty close to being in reasonable order and I may write them up in my next post.

Meanwhile on the modelling side I have been tidying up hills I had previously made with "Multi Use Foam Board" from the local hardware store. The reason for the tidy up was two fold:


Here are the steps for the new non-snagging hills.

Step 1 - With the remaining foam board I cut out and sanded rounded edges on a couple of hills. Then painted the edges a mid-green and with a watered down overcoating of brown.


Once the paint was dry I stuck on some scenery mat just on the flat top of the hills. The mat is made by Heki (Nr.30931) and it matches the citadel cloth mat. Again the ever useful PVC glue was used.


I left the hills over night for the PVC to dry and in the morning used scissors cut the scenery mat to tidy it up. Then brushed over the sides with PVC glee and sprinkled on fine grade flight green lock.

This is a short post as we have just returned from a weekend visit to Wellington (NZ) to see our kids. The day before leaving a Wespe kit I had ordered arrived, so I can now add some more mobile artillery to my ever growing WW2 armies. Since I completed what I thought were sufficient units, some six months ago. I have been adding a unit here or a unit there regularly as I have come across model kits that I remember as a young teenager or just like the look of. I am now beginning to have a storage problem (others would say I have a collecting problem).

Anyway, this will provide a little diversion from the HYW armies I am currently painting.

I am yet to get back to my WW2 campaign. As I am playing around with some ACW rules and introducing ideas as I read through "Rally Once Again - Battle Tactics of the American Civil War" by Paddy Griffith. However, there are a couple of modifications I am adding to the Reorganising/Regrouping section of the WW2 grid-based rules. These are:

Rather than have a successful 4+ to reorganise with plus or minus factors. I chose simplify it to a 3+ and never allow poor quality troops reorganise, while elite/tank units get to re-roll failures. The change is to encourage quality units to retire and regroup for a counter attack and not just hang in there until eliminated.
Posted by Peter at 17:25 3 comments: