I am slow continuing to add to my WW1 Palestine campaign armies with the addition of some more Turkish units and a machine gun. My intention with adding units is to give myself the option to expand the forces involved on the tabletop to 8 units rather than just the 6 unit One-Hour Wargaming style games.

In addition to units I want to represent a few trucks on the tabletop regardless of whether the rules require them. They can be there just as scenery. This is because supplies were a major feature of the Palestine campaign with the inhospitable terrain.

The trucks are made from wood and cardboard. They are not trying to represent a particular type of truck and are very generic. Here is a brief overview of the steps involved...


A couple of Turkish units completed this week. They are Strelet's figures in tropical uniform, a change from HAT Industrie figures I have previously used. 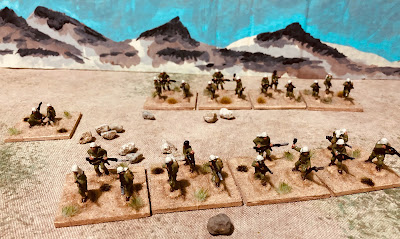 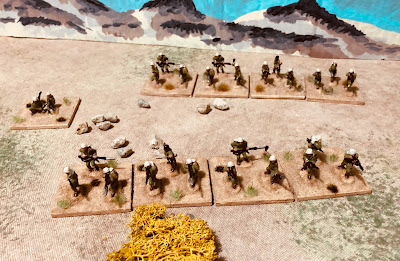 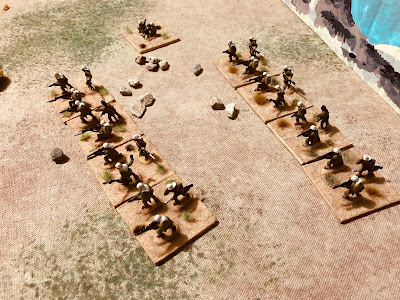 My first few WW1 Palestine campaign games have been using forces made up of six units. While this is working well I would like the option to increase number of units in a game to eight units per side.

One unit I wanted to add was the Australian Light Cavalry. HAT Industrie do produce these figures, but these seem to be out of stock at all my usual sources. So I opted to try and convert some WW1 British cavalry figures.

I trimmed the WW1 British cavalry hats and slid over a cardboard brim with the centre punched out. The punched out centre being the same size as the head so I could slid it over and glue in place. I also trimmed these models with a lance to be a rifle or bayonet.

Other units completed this week were some more ANZAC infantry and a machine gun. The reason for the camel in the background on the machine gun base is so I can add the base to a mounted infantry unit. After the initial stages of the Sinai and Palestine campaign, mounted infantry increasingly had additional support weapons attached to them.

On the tabletop I am having a quick break from the recent WW1 Palestine campaign and returning to some Samurai games.

This post is a game report on the Battle of Beersheba. Details of the scenario setup can be found here on the previous post.

The plan and orders for the Commonwealth forces were:


This is a hard game to win for the attacking Commonwealth forces. Of the four games I played using the scenario, the Turks successfully defended the town on three occasions and lost one time. Most of the games were close, coming down to the last few turns.

The challenge for the attacking forces are:

On the one occasion the attacker won was when the artillery immediately focus on shelling Turkish trenches and Tel El Saba is assaulted by two infantry units, one of which has supporting machine guns.

A most enjoyable scenario to play.

Setting up a scenario for the attack on Beersheba 1917

Weekends that are rather miserable weather-wise, especially one's involving rain, always provide opportunities to get on with some wargaming. This Saturday was one of those days and gave me the opportunity to setup a scenario for the attack on Beersheba, Palestine, 31st October 1917.

The attack on Beersheba was part of an overall plan to outflank the Turkish line and eventually take Gaza. The attack was made by the ANZAC Mounded Corps and is known for the charge by the Australian 4th Light Horse Brigade. They galloped across the plain to attack the entrenched Turks, and were successful in taking the town and importantly its wells.

The starting point for this scenario was from the "last crusade" rules (the scenario was kindly sent by Duc de Gobin - https://warfareintheageofcynicsandamateurs.blogspot.com). The scenario used a greater number of units than my current forces, which are based around One-Hour Wargames (OHW) games with 4 to 6 units per side.

The scenario had two objectives, the town of Beersheba and its water wells and a defended hill called Tel El Saba. I remembered OHW had a scenario with two objectives (scenario 21) and was able to use that to get an idea for setting up a game with balanced forces. So with some reposition of the town (Beersheba) I was able to rework the OHW scenario into a version for the attack on Beersheba.

The infantry with supporting machine guns must occupy Tel El Saba. All remaining units occupy the town and trenches.
Units occupying Tel El Saba are treated as being in rough terrain (cover) and cannot be charged.

Commonwealth order of battle:
They must deploy in Zone 1.
Commonwealth forces win by taking and occupying the town Beersheba and the hill Tel El Saba. Otherwise it is a Turkish victory.
The game will use Machine Age rules from OHW with the following changes:
I also use event cards as described in the book. The enemy panic card is an air attack.
Posted by Peter at 19:44 13 comments:

In the WW1 Palestine campaign supply lines were important to both sides due to harsh terrain and distances involved.

For Commonwealth forces the speed of their advances was determined by how quickly they could construct the supply lines. This supply infrastructure included water-pipes, a narrow guide railway, and chicken-wire roads (where the wire was laid down to stabilise the ground).

While the Turks had extensive railway network established. Large numbers of troops were tied up defending the railways against raids from Arab Rebellion forces and the activities of T.E. Lawrence.

As a break from painting figures and given the importance of railways throughout the Sinai and Palestine campaigns. I thought I should make a train and rolling stock so they could be represented on the tabletop and be objectives to be fought over. I opted to continue my scratch building approach and made some track from felt and a simple train. As with my recent scratch built models I rely upon painting the details rather than modelling them.

I used wooden dowel and beading to create the shapes of the train and its running stock. Cardboard is used on the sides to create a smooth finish and wheels.

The tracks are made from some cut felt material which was lightly brushed with a sand colour. Once dry, I used a dark brown permanent marker to draw the sleepers and rails.

I now need to find a suitable scenario to get the train in use on the tabletop.

WW1 Arab Rebellion cavalry and another book to read

I am slowly edging towards the completion of the Arab Rebellion forces. The latest unit leaving the painting table is the first of two Arab Rebellion cavalry units. The figures are from a box of Strelets Mounted Rif Rebels which the very useful www.plasticsoldierreview.com site suggests are better suited as Arab cavalry.

At the weekend I happened by the local library and spotted another WW1 Sinai and Palestine campaign book called "Allenby's Gunners". As the title suggests it focuses on how artillery were used throughout the campaign and in some of the key battles.

I have yet to finish painting the WW1 Arabs Rebellion figures, having only completed three units. However, by adding the recently scratch-built Rolls-Royce armoured car to support the Arab units I have a reasonable raiding force.

The game is using One-Hour Wargames (OHW) Scenario 27 - Disordered Defence - reworking the narrative for an Arab raid on a well. Throughout the Sinai and Palestine campaigns water, or access to water, was important for the attacking armies. Often they had to rely upon existing roads and tracks and the wells along those routes. The game begins with the Turks having three dispersed infantry units deployed on the tabletop. There is a nearby relief force which will arrive on game turn 8.

The Arab raiding force arrive on the right. They have:
All units arrive on game turn 1.
The objective of the raid is the well and the force that holds the well on game turn 15 wins.
Th game used the Machine Age rules from OHW with the following changes:

This was an enjoyable scenario to play and one I cannot remember playing before. I played this a further couple of times and the defenders won on both occasions.
Posted by Peter at 17:24 20 comments: