A quick update on the 6x6 challenge progress

With my focus in July being to finish off my French Indian War project, there was little progress on the 6x6 gaming challenge. I did manage to play the two final games of my WW2 naval campaign. My total games for the year stand at:

This month I may well get distracted playing a few French Indian War games.

Books and games that have influenced my wargaming

My wargaming hobby (by which I mean collecting, modelling, painting and gaming) has three distinct periods in my life. Each one influenced by a particular book or game. While other books have contributed, these items have been the catalyst for me.

The first item of influence is the book "Introduction to Battle Gaming" by Terrance Wise. My Mother bought this for me in the early 1970's for my birthday. It was her attempt to get me to read (something I had stubbornly refused to do with any enthusiasm) and it worked. This book introduced me to wargaming and all the opportunities of scratch building and converting my Airfix figures. Over the next few years I tried to emulate many of the armies shown in this book. I was hooked. 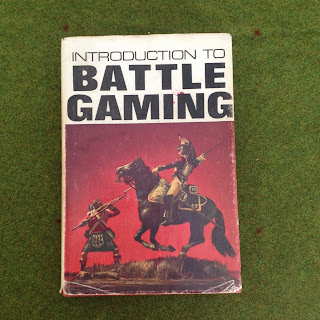 The second item is the starter set "Battle for Macragge" for the 4th edition of Warhammer 40,000. Purchased mid-2000's with my son as the "let us do this together". Up to this point my wargaming has ceased for many years with moving countries, marriage, career and kids. Everything was boxed up and unfortunately all my old Airfix armies thrown away (moving countries causes many unused items to be shed).

Wargaming in the 40,0000 universe meant I had a shared interest with my son and a conversation with him. As he was soon to move into the adolescent stage were a grunt is a form of communication. I really enjoyed to building of models and painting aspects of wargaming. As Warhammer 40,000 allows, and encourages, this creative aspect of the hobby. I kept up with the rules at the beginning, even going in to a competition, admittedly to keep my son company. Overtime I gave up on the rules due to the tedious need to constantly check the rulebook to see which rules applied. 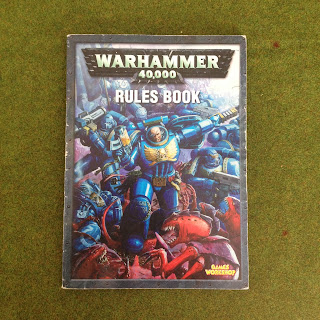 The third item was purchased out of curiosity around 2015. The book "One-Hour Wargames" by Neil Thomas has been the trigger for me getting out my old metal miniatures (which I did manage to keep) out of their boxes and back on to the tabletop. I liked the simplicity of the rules, the thinking behind them, and how you can quite easily add to them to create home written rulesets to a level of complexity to suit one's tastes.

I am now enjoying my historical wargaming as much as I did back when I started wargaming as a hobby. This last period of my wargaming hobby I have been merrily bogging about. 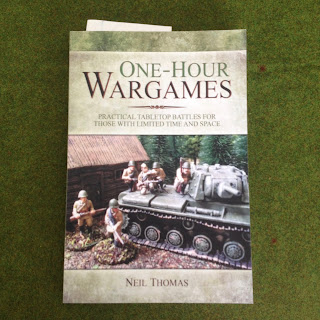 This is a bit of a filler post as I have been messing around with my WW2 rules while I decide how best to approach my Napoleonic project. The good news for me is I will be starting the project next week having identified a free set of rules I can tailor to a square grid. The rules are from the blog Numbers, Wargames and Arsing About by Jay (Old Trousers) who has a number of free games and rulesets. Some are influenced by other rulesets which have been reworked and reimagined for different periods and use a grid-based approach with hexes.

I plan to convert the game Waterloo a la Carte to a square grid for my tabletop.

Email ThisBlogThis!Share to TwitterShare to FacebookShare to Pinterest
Labels: Wargaming

Filling in time between projects

Not much painting happening at the moment as I determine how to approach my next project. So I am filling in time a bit this week by painting up a stay cannon I had floating around. It was an extra I received when I originally purchased my original Spencer Smith ACW figures in the late 70's or early 80's.

For some reason I had a hankering to have a WW2 game. It has been a while since I last played a game in this period. Back then I was trying out a few rule changes to the One Hour Wargame WW2 rules.

The rules I was trying out were:


I am quite liking the way the rule changes are working for a couple of reasons. Firstly, I am always a bit dubious when all a forces units can move, it does not feel right. Only moving up to half of the units causes a forces units to move in phases. Seconding, supporting fire allows units which have not taken an action to be involved.

Having completed a blockhouse to add to my French Indian War armies last week, it was time to figure out how to create a fort. One of the considerations I had was not to create a large piece of terrain which would require storage.

I opted to build the fort walls in 6 inch strips to fit with the 6 inch tabletop grid I use. My figures are based on 3x4 inch bases so small firing steps are not going to work. The approach is to use MDF for the walls and an angled pine moulding for the firing steps. This allows a defending unit to be seen over the defence wall.
The MDF was cut into 6 x 1.5 inch strips and the moulding cut into 6 inch lengths with a 45 degree mitre cut on each end. These were then stuck together and stapled to hold them. The stapes were removed later on once the glue was dry.

Once painted all sections got a coat of varnish and the back flocked. Very simple to make and paint and can easily be packed away without fear of any breakages. It is surprising how effective a little bit of paint quite quickly applied can transform a simple strip of MDF into a log defence wall.

The whole lot including block house (made from balsa wood and card) cost less than $20, and made over the weekend.

I am yet to play any 6x6 challenge games and the July is quickly slipping by. So it was time to return and complete my mini WW2 Naval campaign and hopefully get 2 games out of it. 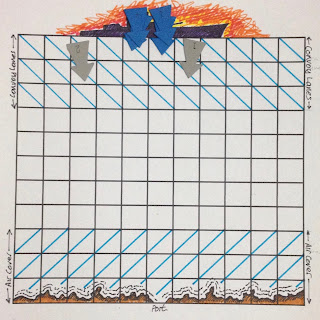 The campaign was at the stage where the Grey force had successfully made its way across the convoy lanes to the top of the map and were now heading back to their home port having achieved their objectives.

Before any games could be played Blue force had to catch up with the Grey raiders. Their only chance was to hunt down the pocket battleship which had sustained serious damage in a previous encounter and had to roll a 4+ in order make a campaign move. 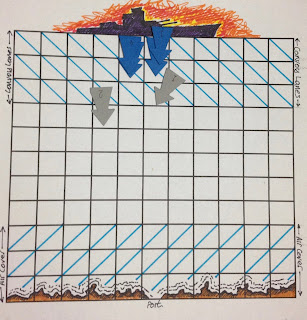 While Grey's pocket battleship was struggling with damage repairs the weather turned stormy and was a hindrance to Blue's forces search (who have to roll 5+ in stormy weather to move). However, contact was made and game 5 could begin. 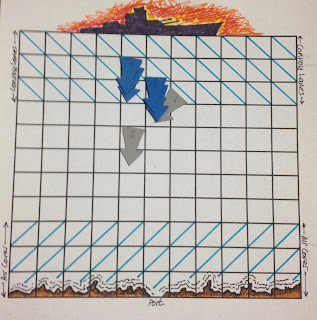 Game 5 began at 1pm with stormy weather. Grey's pocket battleship was spotted by Blue's force of a light cruiser, destroyer and two corvettes. Blue's ships were outclassed and hatched a very simple plan to: close the distance as quickly as possible, let loose all their torpedoes and then retire as fast as possible.

Having fought off blue's forces in game 5. Grey's pocket battleship failed to make much headway in the following campaign move (in other words it failed to roll a 4+). The weather was fine and allowed Blue's forces to close and engage.

Game 6 - Both forces spotted each other at 10am on a fine morning. Blue's force had a battleship, two destroyers and two corvettes. Their plan was to close to torpedo range and engage.

So the campaign is over in game 6 with the sinking of Grey's pocket battleship. Grey's other force successfully makes it to port. Victory goes to Grey for 2 campaign points for getting both forces to the top of the map, while Blue achieved 1 point for destroying one a Grey's forces.

The games themselves have taken between 15-30 minutes using the straightforward Panzer8 WW2 naval rules, which can still be found in an archive here.

All in all, an enjoyable set of games which were enhanced by having a campaign wrapped around them. The dice generated campaign and game moves worked well. In fact too well, for as Blue I lost.
Posted by Peter at 19:35 2 comments:

To add some variety to my French Indian War armies a blockhouse and fort is needed. The blockhouse is the easier and smaller of the two to make, so I started there. I mostly use balsa wood and simple shapes, using paint to show any details.

Here are the steps...

This weekend I was able to paint and finish off the last couple of Spencer Smith units for my French Indian war armies. Huzzah! And now I can have a break from trying to complete two (or more) units each week. Before I get going on my next painting project, I will be making up some canoes, boats and a fort for the period.

I chose not to use all the artillery miniatures available for the moment. Two artillery units seemed quite sufficient for the armies which will normally field anywhere between 8 to 15 units per side.

I have been able to get in a couple of smallish games of 8 units aside during the week. This was to test out some or the rule changes mentioned in the last post.

Not all my rule changes worked, particularly the cover rule requiring attackers to be adjacent. Never mind, amendments were made which seem to be working, and I am now writing the rules up to add to the rules available at the top.
Posted by Peter at 14:33 8 comments: