This week I continued with painting my 19th Century Imagi-Nations armies using old plastic Spencer-Smith miniatures. However I did have a little diversion to rework a couple of recent second hand WW2 purchases, painting them up to add a bit more variety to my German late war army. 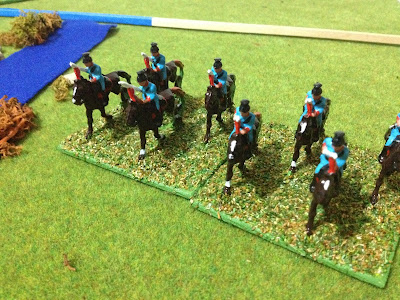 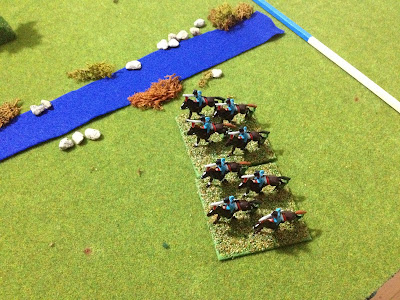 The Sheriff of Lockdew and his forces were slow to march north to join Prince Riddick and Sir John Chewford. This provide the opportunity for Baron Chastain to marshal all available units and march upon the English rear.

Neither force had the baggage in tow and so would be fielding two less foot sergeants or archers due to attrition on the campaign, desertion, sickness and dispersed troops foraging for food. Every 3 campaign games reduces the number of available troops by 1 to reflect the hardships of campaigning.

Baron Chastain lined his forces up behind the river between the two crossing points:


The Sheriff of Lockdew fielded:
His plan was quite simple. Wear down the French with volleys of arrows then charge in with his mounted forces. 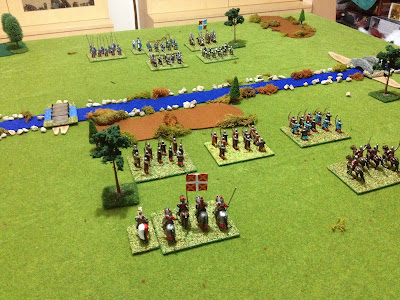 The English archers moved up and volleys or arrows were exchanged, but the better shooting was done by the French crossbow men. The English archers started to drift away from the fight. Emboldened by his crossbow units success, Baron Christian ordered his foot sergeants across the wooden bridge to apply more pressure on the English.

The Sheriff sent his mounted sergeants across the stone bridge in an attempt to disrupt the French crossbows who were proving to be very accurate this day. French mounted men at arms lead by Baron Christian soon countered the English threat and had them on the run.

This weekend I was able to play out a another Hundred Years War (HYW) game as part of my 6x6 gaming challenge. The games are being played as part of a campaign where the English are trying to navigate their way back to their ships without bumping into too many elements of the French army who are naturally trying to stop them escaping.

The French force under the leadership of Baron Bechard had at his command the following units:

The English were able to field one more unit because they were with the baggage. Part of the campaign rules are that after every 3 games the number of foot sergeant and archer units a force can field (originally 5) are reduced by one to reflect attrition and desertion on the campaign. As this is the sixth game after this game only 3 of these units types can be fielded. The exception is for the units with the baggage which ignore this rule and can still field 5 units.

So the English field (with their baggage):


The English started by pushing units towards the stone bridge on their right and towards the ford in the centre. While at the same time moving up their main battle line.

Move French units crossed the ford to support the foot sergeants who had beat a quick retreat into some difficult terrain. While by the stone bridge a single unit of men at arms defended the bridge after the crossbowmen were successfully eliminated by the English foot sergeants.

Seeing a slight opportunity with the English spread out. Baron Bechard leads his last reserve unit of men at arms across the river to support an attack on the English centre and woods. Taken by surprise a couple of English units are forced to give ground.

The English centre was able to neutralise the threat with volleys of arrows and positioning of their mounted men at arms. Seeing his brave gamble had not come off the Baron mad a hasty retreat before the English could charge and turn a minor victory into a major victory. This would have been done by eliminating the Baron and his unit.


While this battle is the last of the 6x6 challenge the campaign will be played to a conclusion. So the campaign scene is setup for some campaign moves in readiness for game 7.

Movement post the game 6 saw Sir John catch up with his commander Prince Riddick. The last element of the English army under the command of the Sheriff of Lockdew will be having to fight another rear guard action, after Baron Chastain had mustered all his available troops and attacked.

The English really need a major victory or hope the French have few campaign moves to enable them to make a run for the ships. Too many more battles and they will not be able to field many units. The French can always field additional units when fighting in and around their towns and villages.
Posted by Peter at 22:51 5 comments:

During the week a couple of book purchases turned up. The first was "Wargaming Nineteenth Century Europe 1815-1878" by Neil Thomas. While I have the book already as an ebook I thought a hardcopy would be useful with my current Imagi-Nations 19th century project. The recruitment drive (painting) is progressing steadily with a couple more units painted up. 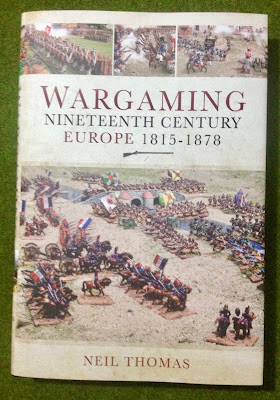 The second book "Wargame the Spanish Armada - 1588" by Peter Dennis is for my 6x6 game challenge using Galleys and Galleons rules by Ganesha Games. The book by Peter Dennis comes with pages of ships to photocopy and cut out. Something I have done before with his "Wargame 1066 Saxons-Viking-Normans" book from which I was able to quickly assemble some Saxon, Norman, and Viking forces. Both books come with their own rules which I have not yet used (but should do) as both use a square grid playing surface.

Anyway, this will be a mini-project as I only need a few ships to pay Galleys and Galleons, and it will provide a little break and diversion from just painting 19th century units. 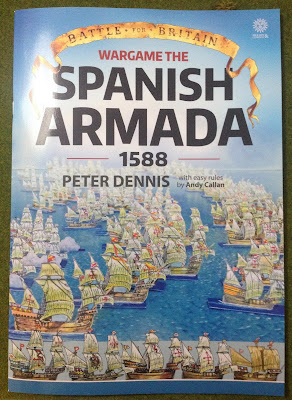 Here are some photos of my most recent Imagi-Nations painting effort. This weekend hopefully will be spent getting back to playing a couple of games from my Hundred Years War campaign.

A couple more units of my 19th Century Imagi-nations units completed. In this case a couple of cavalry units. Green-stuff was used on these Spencer-Smith ACW confederate cavalry to add feathers to their hats. This is an attempt to help disguise them and make them look a bit European(ish).

While I have been painting away on my 19th Century Image-nations units. I decided (while waiting for the paint, PVV glue or varnish to dry) to have a play around with One-Hour Wargame WW2 rules and try out one of two options.

I already use a OHW WW2 rule variation modified for a grid. Rather than build on those, I thought it best to go back the original rules as they provide such a good foundation to add to.

Rules options I was trying out were:

Tracking of hits
I find tracking 15 hits on a unit quite frustrating at times with having to move markers or up to 3 hit dice around with a unit. I don't mind moving 1 (or maybe 2 dice at a pinch) around with a unit. Mainly because they can fit the dice on to a stand. So I choose to try halving the to hit dice scores and also reducing the number of hits a unit can take to 6 after which it is eliminated (on the 7th hit). All to hit dice scores are rounded down:

This then has implications to halving again for cover as occurs within the OHW rules. Leading on to treatment of cover option...

Cover
In OHW the number of hits is normally halved. The alternative option is to double the number of hits a unit can take to 12. This does mean once a unit has taken hit number 7 when in cover it is committed to remaining in cover. For should it move out of its defensive cover it will be eliminated.


I incorporated this mechanism into my American War of Independence OHW variation rules awhile back and found it works well, making units commit to a defensive role (especially with militia units). It does mean if you want to launch a counter-attack you need to hold units in reserve to do so.

Shooting (and multiple attacks)
Rather than having multiple attacks on a unit, only one combined attack can be made per turn on a unit. With combined attack the primary attacking unit (normally the one with the best modifier) rolls an additional dice for each supporting unit engaged in an attack. Then selects the highest dice score to apply the number of hits.

For example: an AT gun with two infantry units against a tank rolls 3 dice selects the highest score and adds +2 modifier.

Overall the mechanism does favour the defenders over attackers, who will need a minimum of 2 to 3 attacks (depending on modifiers) to eliminate a defending unit assuming they are in the open.

Movement
To introduce an element of unpredictability to movement, roll one dice:

So far the options are working to provide an enjoyable and quick game. There are a couple more changes I want to try out over the next few weeks.

Painting is progressing steadily on my 19th Century imagi-nations armies with a couple of artillery units completed during the week.

Being image-nation units I am can pick a colour scheme which helps with the ease of painting, along with a simple paint approach (which also seems to look best on them).

Next up for painting will be a couple of cavalry units.

My current reading (re-reading) is "War Games through the Ages - Vol.4 1861-1945". I purchased the book along time ago through an ad in one of the wargaming magazines in the late 1970's. Lo and behold the sale was from the author himself who had kindly signed it with the message "good wargaming". A treasured item in my library of wargaming books. 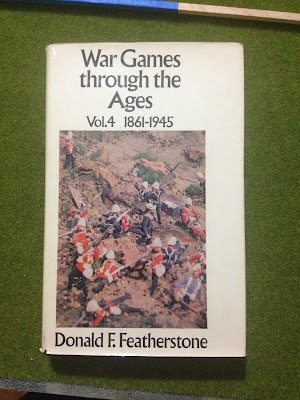 Having worked out the base sizes I have started the painting in earnest with a goal of two units every week. The painting is very simplistic with no washes or dry brushing, so I am reasonable hopeful of being able to maintain this target. In fact I am quite enjoying the painting aspect because there are few fiddly bits to pain and I am not looking for painting perfection. Far from it as the aim is to paint them quickly and with a toy soldier feel to them.

The aim is to have the following for each of the imagi-nation armies:


That will me 150 or so figures per army needs to be painted or 300 all up. Tally so far 45. I suspect I will increase these numbers once I have achieved my initial target, more in increase variety and use the figures than increase the number of units on the tabletop.

Having printed my second unit for my imagi-nations armies I have been playing around with how best to base units and the base sizes themselves. I am not yet decided as to whether I will use a grid for these armies or not.

The armies themselves will be a combination of ACW and Napoleonic Spencer Smith figures.

My basing constraints are:


So after a few basing trials I have decided upon two bases for all units and two different base sizes.

I started this project with the idea of using my remaining ACW units which had not become brittle. Thanks to a swap of figures I have now some Spencer Smith Napoleonic figures. A lot more than expected which will add to the variety of units. The cavalry show in the above photos are lancers.