This Easter weekend was very quiet and I was not feeling too well. So I was able to sit down and get through paining and basing most of my recent purchases (which always makes me feel better).

Now having painted up my aircraft I really need to start thinking of some rules for them, which will no doubt require the purchase of some AA equipment. A fully justified purchase - bonus!
In addition painting I played a few small WW2 games and along the way made some rule changes to the combat mechanism. These made the game feel better for me, they include:


I am now updating the rules from my notes and scribbles, and taking a few photos to include as examples of the new rules. I plan to post them by the end of the week.
Posted by Peter at 17:04 2 comments:

This Easter weekend I have a block of free time to focus on painting some recently purchased WW2 kits and try out one of two terrain items. In between paint and glue drying times I hope to fit in a couple of games to help finalised a couple of rules modifications I am trying out.

This week has been a productive modelling week, earlier I completed some kits which I had made up and just required painting. These included a Churchill tank and British Motorised Infantry units. The motorised infantry would be added to my existing single motorised unit.

I had purchased a StulG 33B which does not fit in with my NW European theme. I did think about the StuH 42, but went for the 33B as it looked different and I would not confuse it with the StuG III. Given that I'd thrown out any notion of historical accuracy I converted the second StulG (2 in a pack) to a self propelled artillery unit - a fantasy model.

Sci-Fi campaign comes to an end

It has taken about a week for me to get around to writing up this campaign game. As with all the other games I'm using a set house rules based upon One Hour Wargames (OHW). For this stage of the campaign OHW scenario 13 - Escape - was selected from the remaining Consolidate Phase options.

A Tyranid raiding force is blocked by Imperial forces on the road and they have support arriving from  each flank. To win the game the Tyranids must have three units exit the road on the opposite side.

The forces were selected as per previous campaign battles (see post here). 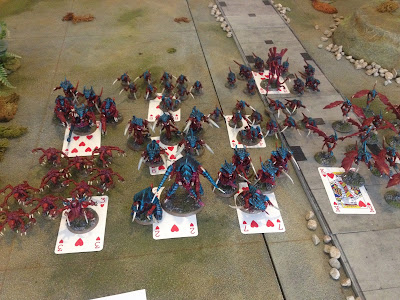 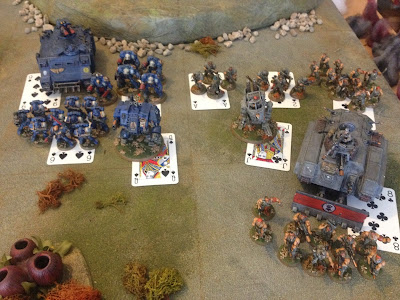 As imperial forces arrive on the flanks deep-striking Raveners and Genestealers, lurking in the woods, seek to delay the Space Marines from moving towards the road. 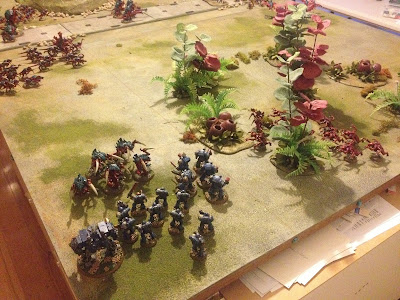 On the opposite flank a Warrior unit attempts to hold up the Imperial forces on the hill. While at the roadblock Gargoyles harry imperial defenders as the bulk of Tyranid units move down the road. 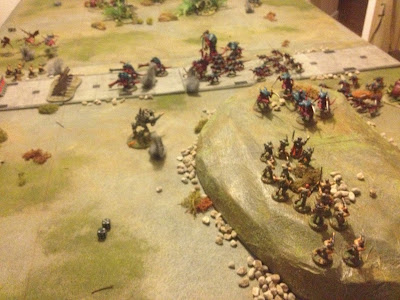 Space Marine Tactical and Terminator squads having dispatched a group of Raveners now take to the Genestealers, allowing the Dreadnought to slip away and advance towards the road. 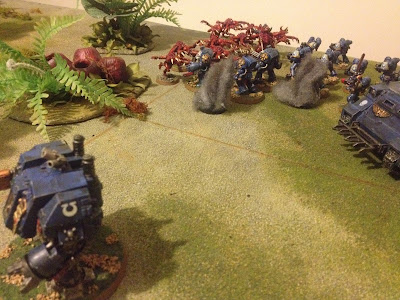 Weakened Imperial roadblock forces are desperately hanging on in the face of attacking Tyranids. While support from the flank battles its way towards the roadblock. 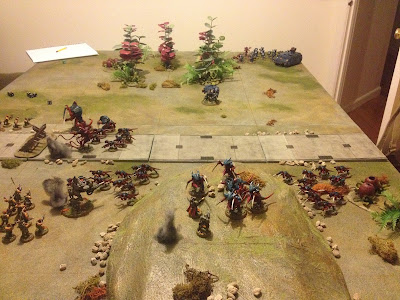 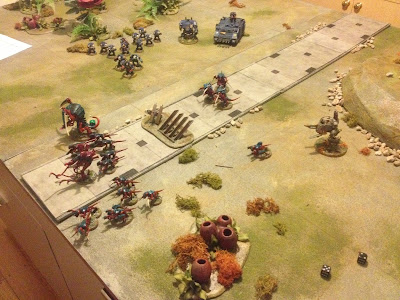 Imperial forces win a series of activations and were able to eliminate the fleeing units before they could exit via the road. This was a very close game. Two Tyranid units did successfully exit the road and one more activation win would have allowed a third to exit, but it was not to be. 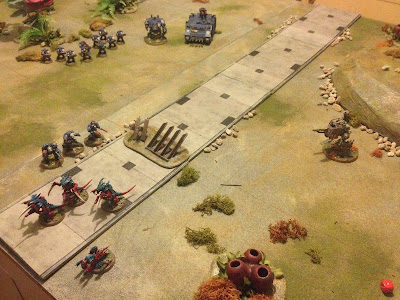 This Tyranid loss was their sixth defeat and as a consequence (with no remains bio-mass) this brings to an end the campaign.

Unit of the Game

For this last game the honour goes to the Terminator squad for their final assault delayed the fleeing Tyranids enabling their destruction.

I will be doing another campaign once I finish my WW2 project (rules and figures).
Posted by Peter at 22:28 11 comments:

As fast as I complete my WW2 miniatures I seem to be buying more. My recent purchases were somewhat opportunistic.

With a level of stabilisation in my WW2 house rules (click here) I now want to add air support and introduce some elite units, along with using the existing heavy tank option rule. For the elite units I am planning for one company of commandos and a battalion of paratroopers. No ideas yet on the optional rules for them, it just seemed like a good idea when justifying the purchase.

I do plan to add a game clock into my rules to help with the narrative. For example, "reserves are expected to arrive at 08:15" sounds much better than "Turn 3 reserves arrive...". The idea of a game clock comes from the rules "Tigers at Minsk" (rules, ideas, design notes and supporting information found here) which have influenced my thinking when writing my house rules.
Posted by Peter at 22:42 4 comments:

Back to the Sci-Fi Campaign

After focusing on the WW2 period and the associated rules for the last couple of weeks it was quite refreshing to get back to my Sci-Fi campaign. The campaign had been left hanging with the Tyranids progressing to the campaign's Consolidation phase having survived the Imperial force's counterattacks.

The forces were selected using cards as outlines in the featured post. The imperial forces were lead by Commissioner Verdeck replacing Space Marine Commander Bariel after his last defeat. Of the two forces the Imperial selection looked very strong and balanced at first glance. However, the Tyranids had Genestealers with the stealth ability (able to arrive on any table edge) along with a unit of deep-striking Raveners.

A quick roll of the dice selected One Hour Wargames scenario 2 (pitched battle #2) from the three scenarios in the Consolidation phase. To win a force had to take control of both crossroads and hill.

Both forces lined up on their sides of the table, while Tyranids held their Genestealer and Ravener units in reserve ready to enter with their respective stealth and deep-strike abilities. The Imperial forces started with early control and quickly placed Terminator and Devastator squads on the hill. A Tyranid response was quick in coming with some surprise appearances from the Genestealers behind the Commissioner and a Ravener unit on the hill next to the Terminators. The battle for the hill had begun with neither force hanging back.

Tyranids continued to swarm up the hill while the Carnifex moved to hold the crossroads, only to succumb to some very effective fire from the nearby Chimera (which rolled three 6's with four dice!).

Behind the hill luck continued to go the Imperial forces. A Motorcycle squad leaping to support the Commissioner who's future looked very short in the face of the Genestealers.  With all guns blazing the squad roared into the zone and used their stomp ability to dispatch the remaining Genestealers (who's numbers  had been whittled down by support fire from a Sentinal).

While the Leman Russ moved up to secure the crossroads, Commissioner Verdeck and Motorcycle squad moved to support the hill's defence which was teetering after the Terminator squad fell to the combined scything talons of the Ravener and Hormagaunt broods. The Devastator squad was soon to fall only to be replaced by an Imperial Guard squad in the desperate battle of the hill.

With the Crossroads secure the Imperial forces rushed to support their comrades on the hill. The battle of the hill had been equally devastating for the Tyranid forces, but the battle had started to swing their way with the arrival of their Hive Tyrant.

The battle finally swung towards the Imperial forces with some solid dice rolling. An Imperial victory!

Unit of the game

The choice for unit of the game was between the Motorcycle squad and the Imperial Guard unit. I've gone with the Imperial Guard, or more specifically its Sergeant, who lead his unit up on the hill and engaged the Hive Tyrant, putting the final nail in the Tyranid coffin with a double 6.

The next game could be the decider. While the Tyranids have been progressing through the campaign phases, they have been losing battles getting through on the last battle of each phase. As a result they have been using up their bio-mass and can only sustain them for 6 battle losses before it is all consumed. So they must wind the next two battles to win the campaign, any losses and its victory to the Imperial defenders of planet Vyran.

(The campaign rules are detailed in the featured post.)

A couple more WW2 British units completed, a Motorised Infantry unit and Reconnaissance unit, to  be added to my growing WW2 collection. The Truck is originally from a Revell's Mont's Caravan kit which I bought mainly for the Daimler scout car. 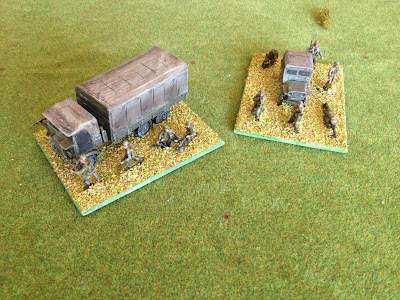 This is a very brief post as I have been without internet for most of the weekend due to a failed modem. I have last managed to complete writing up the WW2 house rules and include a number of pictures to show rule examples. I'd describe the rules as a bit of a cocktail of One-Hour Wargames with a dash of Panzerblitz.

Here is a link if you are interested. WW2 Grid-Based Rules or go the top right hand corner of this blog.

All the pictures are from my own recently completed collection and are mostly ArmourFast and Airfix models.
Posted by Peter at 12:12 4 comments:

Somewhere between power tools and landscaping products at Bunnings (my local hardware store) I found a stash of multi-use foam board, which I quickly added to my overloaded shopping cart. This will be great for making some hills this weekend. There were two thicknesses available, 50mm and 30mm, I went for 30mm as it suits my 20mm and 15mm miniatures.

After making a few rules changes last week and playing quite a few small games to test them out, I felt confident enough to try playing a couple of larger games over the weekend. The games, even the larger ones, take between 45-60 minutes which is about the right length for my solo playing, which mainly in the evening.
No rule changes this time around, but I did try out some optional rules for minefields and destroyed tanks. Both were introduced after reading through the Panzerblitz rules again. This week I'll be writing up the rules and I though I'd try out creating a page on the blog for them.
Posted by Peter at 22:29 2 comments: