The next battle in the French Indian War campaign is a small game, but is important for the progress of the campaign. For if British win they will be able to threaten French settlements on the Great Lakes. For the campaign background and operational moves goto Palouse Wargaming Journal where Jonathan provides the context for this battle.

A quick search to get some idea of how to layout the tabletop delivered this contemporary drawing.

As the game is quite a small one with the larger British force having 6 units. I decided the game will be played on 4x4 foot tabletop using a 6 inch grid (8 squares by 8 squares). To represent the edge of the plateau upon which the fort sits, I laid out some difficult terrain which the British will have to negotiate. If they get held up the French will hope their fort guns will cause some additional casualties.

Game Report
The French under the command positioned a half their force in advance of the fort in the hope the British line would be disrupted moving across difficult terrain and they could inflict some casualties before retiring in line with the fort.

With the French commander killed or wounded. The British pressed their advantage and quickly eliminated the second French unit outside the fort. French army resolve collapsed and they ceded the fort and marched out. Neither side lost any regiments as a consequence of this engagement.

This turned out to be a really quick game played out over just 4 turns. Just one of those unusual games campaigns throw up and ones you would never think of setting up and playing yourself.

What happened to Commander Bougainville? Does he live to fight another day? A quick D6 roll decided his fate (1-2 escapes injury, 3-4 wounded and needs to convalesce for a couple of months, and 5-6 killed in action). A 2 was scored and he survives!

Before playing the next game in the French Indian War campaign, I thought I would get in a quick WW2 game and setup the tabletop.
This weekend I plan to get my first English Civil War unit painted up and work out the painting technique to use. As usual I will be using 4x3 inch bases so they fit nicely on the 6 inch gridded tabletop.

If you are wondering why the flag is blue. It is because I use painters masking tape to make the flag. It sticks well when you wrap it around the pole, and can later be easily shaped.

Email ThisBlogThis!Share to TwitterShare to FacebookShare to Pinterest
Labels: ECW

Finishing off a battle mat

A couple of weekends ago I started on making my own battle mat while waiting for the glue to dry on a star fort I was making. The first stage of making the mat can be found here, and briefly describes how I roughly darkened up the light green curtain material with a rough brushing of watered down mid-green and also a green-brown colour mix. At the time I did not think I had got the colour and overall look I wanted.

One of the comments suggested using a sponging technique (thanks Norm). After searching through the shed full of paint and painting equipment I found my old natural sponge. So with sponge in hand and a slightly watered down green (a colour I use on my bases before they get flocked) I started sponging. With each sponging gradually building up the desired effect and colour depth I was looking for.

With the paint dry it was time to use the battle mat for a WW2 game. The mat being curtain material has a backing which gives it some weight, so it sits quite nicely over books or blocks to make smooth looking hills.

After setting up the terrain for a game and standing back to look at the end result. It occurred to me how much some of those early wargaming books (Battle, Introduction to Battlegaming, and Operation Warboard spring to mind) have influenced me with their ideas and chapters on making your own terrain. Because with the exception of trees (only a quarter of the trees are home made) all the other terrain was home made from balsa wood, modelling materials and various purchases from the hardware store. While many of the terrain ideas come from various blogs, those early wargaming authors sowed the seed for much of my approach to wargaming today.

Game 6 of the French Indian War campaign has French and British forces fighting over the familiar ground of Fort William-Henry. The campaign moves leading up to this battle can be found on Jonathan's Palouse Wargaming Journal blog.

Order of Battle
The figures in brackets are the campaign regiments which are represented by 3 units on the tabletop. 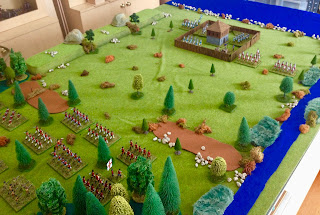 Battle Plans
For the French the plan is to defend both flanks of the fort. Grenadiers on their right flank aim to hold off any attack from the hills. While on the other flank 2 units or Regulars will hold position adding their fire to those of the fort.

The British plan is to move up their Rangers along the hills and once the French Grenadiers are engaged move their lines up veering towards the French right flank.

A French victory and another close game. The French army resolve would not have survived another unit loss. I plan on keeping the rule change for the next game.
Posted by Peter at 22:39 12 comments:

Siege works for a siege wargame

Work continues with preparing for a siege wargame. This week I have been creating the siege works terrain.


So while I have yet to write any rules for a siege game. Here are a few photos of how I hope my games will look. I use brown felt cut into strips of various size for the parallels and communication trenches. The siege work terrain is placed on the parallel strips.


I now need to make a couple siege mortars for besieging army.

The 5th campaign game was going to be a smaller game than previous. The background for the attack on Fort Stanwix can be found on Jonathan's Palouse Wargaming Journal.

The orders of battle. Each campaign regiment (in brackets) is represented on the tabletop by 3 units.

The British forces were all deployed in Fort. The French deployed south of the fort with the intent of conducting a straight forward assault on the fort with all units. 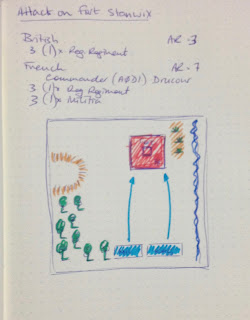 The game was setup on a 4x4 foot space with the Mohawk River on the East flank and woods and a hill on the West flank.

Another victory for the French and an important political victory in terms of the campaign. This was quite a fun little game, but has raised a question for me about army resolve when defending a fort. I am now thinking the rules should allow a defending force to increase their army resolve by 2.
Posted by Peter at 21:42 12 comments:

Yesterday I spent the whole evening finishing off my star fort with a series of washes and dry brushing. The fort itself has been constructed so it can represent both larger and smaller star forts by adding up to three bastions.

In terms of constraints, the fort construction had to fit and line up with my 6 inch gridded tabletop, and accommodate my troops which are on 4x3 inch bases. This has meant the fort is a tad stylised and geared towards the practicalities of wargaming.

So, here are the remaining steps I used to complete the fort and its bastions. See the fort construction part 1 post here.

With the construction completed and the base coat of paint dry. The remaining steps are just about apply colour to create some depth, pick out details and give an impression of detail when there is none on the model. My painting style uses quick dry brushing and wash methods and is very loose (and easy).


I will occasionally continue with dry brushing or washing selected areas where I have missed areas in my haste or some part does not look quite right. But I keep reminding myself this is meant to be a practical piece of wargaming terrain and not to fuss over detail.


With the fort completed and ready for a French Indian War game. Total cost to build is between $25 to $35 as I pick up all the materials from the local hardware store.

I now need to turn my attention to making the besiegers terrain features of saps and parallels. Storming this fort will be no easy task!
Posted by Peter at 12:01 10 comments: