For my WW2 mini-campaign I am going with a territorial style campaign, where a simple map marked into zones will be used to track how well either force is progressing.

Attacks alternate or moves between sides. When attacking a side declares the target zone adjacent to a zone it currently occupies (diagonal attacks are not allowed). If there is no force occupying the zone it is occupied without a game. However, it the zone is occupied by the opposing side, then a game is then played. If the attacking side is successful, it occupies the declared zone.

The game ends when both sides have consumed all their supplies.


Supplies are consumed whenever an attack is made. There are two types of attacks, a limited attack or an all out assault attack. The former costs 200 supply point and the latter 400 supply points. Choosing an all out attack allows the attacking side to have more units at their disposal in a game and increase the chances of success.

The side which gains the most territory after both sides have consumed all their supplies wins.

The map zone being attacked will influence the tabletop terrain, along with some dice throwing. I am planning for games to be played on a 4' by 4' table.

How I set up terrain and determine force sizes and how they become available during a game will be in the next post later this week.

Second bridge and 17 Pdr AT Gun gets painted

As I start to plan a mini WW2 campaign I have been chipping away at some much needed 20mm scenery which will be used in the campaign, and which now includes a second bridge. As with my first bridge its made from balsa wood and with detail painted on. (A previous post goes into more detail on painting.)

My 17 Pounder AT Gun, a kit bash of a 25 Pounder and 5.5 Inch Gun, has come together. I used the 5.5 Inch Gun carriage with wheels from the 25 Pounder kit. The gun is the 25 Pounder Gun with an extended barrel from my box of leftover bits and plastic rod. The shield was extended by sticking plastic card to the back and then cutting to shape. It is by no means an accurate model, its construction is more aligned to the approach of conversions described in Operation Warboard by Gavin Lyall - simple and strong. By the time it has some figures clustered around it and scenic material added to the base it will look the part. 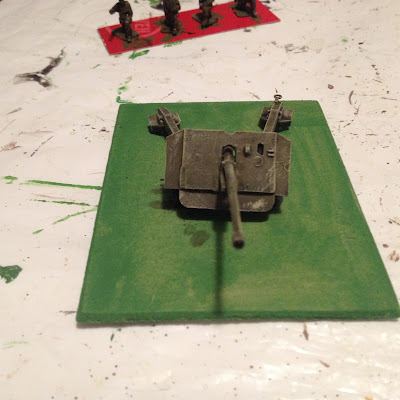 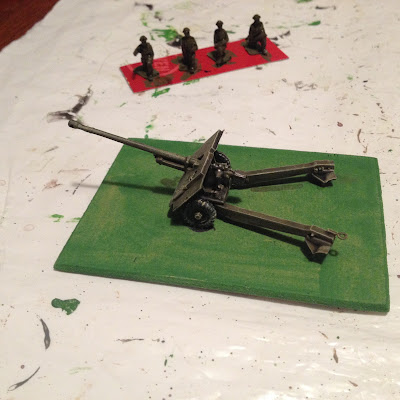 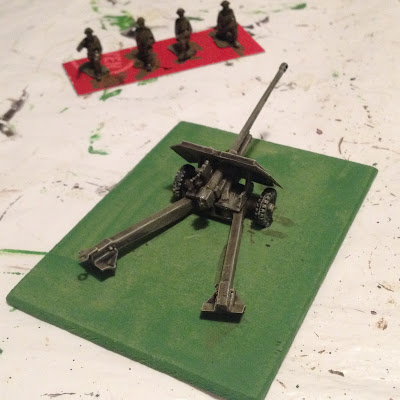 Not much wargaming or modelling happening this week with a long weekend visit to Wellington, NZ, for my daughters graduation. We were very happy and very proud parents. While in Wellington I did pop into the local model store which I used to frequent when I lived there before returning to Melbourne, and purchased a Bren Gun Carrier and 6 Pdr AT Gun, 25 Pdr Gun and Quad, and Matador and 5.5 Inch Gun.

I will be using the 25 Pdr Gun and 5.5 Inch Guns to kit bash a 17 Pdr AT Gun. The Bren Gun Carrier was more of an impulse purchase as another one will always be a useful addition.

As I plan the setup of a WW2 mini-campaign I will definitely require a couple of bridges, which I do not have for 20mm models. So while I workout my campaign approach I have started to make a very cheap and simple girder bridge from balsa wood and a lick of paint. There are no fiddly girders with this model. Here are the steps and pictures...

Step 1 - Cut out the base and glue to some cardboard. Once set, cut out the sides, I stuck two bits of balsa wood together to provide some additional thickness. I also stuck two strips of balsa wood on the base where you would expect vehicle wheels to travel. 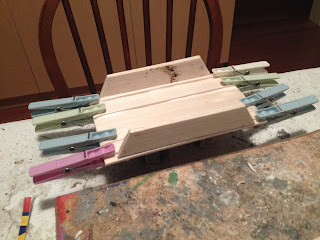 Step 2 - Paint all over with PVA glue. You may need to bend back into shape when dry as the balsa can warp. 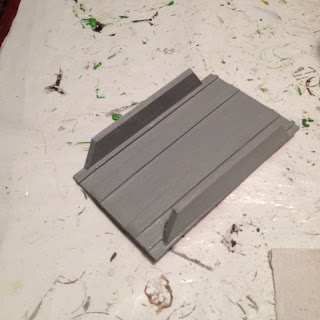 Step 4 - Paint the girder area a dark grey (not black as its too stark). 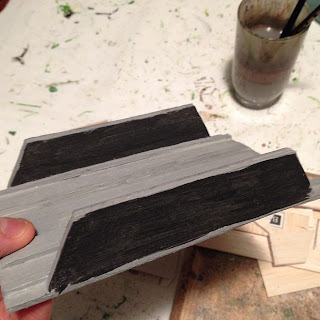 Step 5 - Paint in the girders 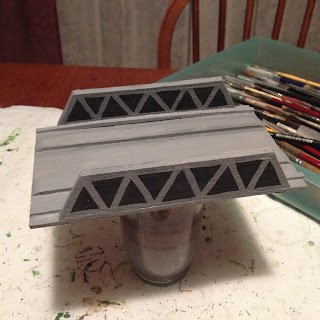 Step 6 - Using watered down dark grey painting in details, but not all details, just enough to give the impression of detail. 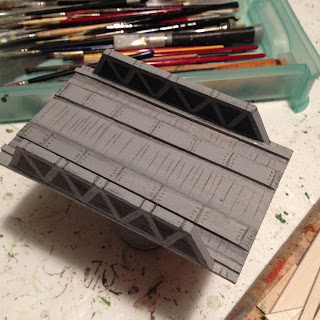 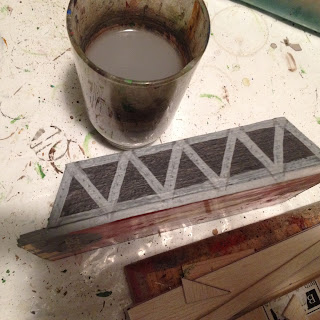 The final product in use (well staged for use). Price $2 AUD for the balsa wood and there is enough left over for another bridge.

Having settled on an activation approach it got me thinking about other aspects of the rules which would help define the different W40K armies I game with. I haven introduces what I call force traits which apply certain armies. But first a recap of the activation approach upon which I have settled on with an additional optional rule.

The force traits are still a work in progress. So far I have used Tactical Doctrine and Reanimation, and they have both added to the couple of games I have played without changing the game's flow unduly. I have put in brackets the W40K armies I think the traits align to.

I have updated the rules (click here) if you are interested in glancing over the 4 or so pages of rules, which also include some unit lists.

In the recent test games I have been using my Necron models. Here are some of the units and how they are used within the rules. A fuller list is available at the end of the updated rules. Its also an opportunity to show some pictures of my Necron models painted many years ago and updated with the odd newer model.

I have now completed painting pretty much all the WW2 models I need. There are more than enough for a 6' x 4' table and I find I increasingly enjoy wargaming smaller games on a 4' x 4' table setup. Any more models I add will be for specific games or because I find a model I really like.


Now that the house rules I am using are reasonably settled (another way to put it - I have stopped messing around with the rules) I think a little mini campaign would be fun to try out over the coming weeks.

So what is next on the painting table? Possibly some scenery and I have a few W40K Chaos kits I recently purchased to bring up my Chaos Marine army up to a reasonable size and variety of units.  This will most likely take me a few weeks, after which I will be repainting my old 25mm Minifig 100 years war figures and start using them with Lion Rampant rules. They were originally painted by myself when I was 15 years old and will need to have the paint stripped back and be repainted.

I am continuing to mess around with my activation mechanism for the SciFi rules. Having opted for option 2 (as described in my previous post) where I roll an extra "Turn" dice when rolling for control, and ending the turn if a 1 is rolled. I have now played a couple of games and the "Turn" dice is working for me. Additionally, when a 6 is rolled the player winning control can either remove an activation from a unit, potentially allowing a unit two actions in a turn, or add 2 extra dice when attacking (an increased weapon strength suggested by Kaptain Kobold). These help add some little surprises when playing solo games.

A couple of pictures from one of the games.

This week my focus has been mainly on a couple of rules changes and playing some quick games to test them. The first change was to my WW2 one-hour war-game house rules and involved the role of (light) reconnaissance units. I want them to represent the presence of Forward Observation Officers which improve the chance of artillery barrages hitting when they are the observers. To help balance this advantage I reduced the Reconnaissance units fire power, but allowed them to always be treated as in cover, as they are a small and fast unit (many thanks Norm for the suggestion). I will have to update the rules later this week.


My activation rules for units in my house SciFi rules (based on one-hour war-game format again) has both players rolling and the player with the highest score activates a unit. Both sides can activate up to 6 units and this does not include are counterattacks when units are attacked. I was asked "why 6?" By Captain Kobold who has tried out the rules with his W40K Epic models. I generally game with between 8 to 12 units, and I didn't want all units activating every turn so a limit of 6 seemed about right. However, the Kaptain's question got me thinking, as the rules disadvantage larger armies.
Revisiting the activation mechanism I came up with two options to try out.

The game is played in a series of turns with control passed between players as they roll for the initiative & command units. This continues until half a player’s units (rounded up) have had an opportunity to perform an action.

To start the game roll a dice (D6) & the highest score begins in control.

When in control a player can command a unit the following actions: a) move, b) attack or c) move/attack. Units perform one action per turn.

After a unit has taken an action players roll again for control. This continues until half the units on both sides have had the opportunity to perform an action.

Even when one player has used all their actions, they continue to roll for control, because if they win with an odd number a player can command a unit to action even if half their units have performed commanded actions.

The game is played in a series of turns with control passed between players as they roll for the initiative & activate units. This continues until both player’s units on the table (not those in reserve) have had an opportunity to perform an action, or a score of 1 on the Turn dice (D6) ends the turn earlier.

A Turn D6 is rolled when players roll their D6 for gaining control of the next action.  This means a turn’s duration is unpredictable.

To start the game roll a dice (D6) & the highest score begins in control.

When in control a player can command a unit the following actions: a) move, b) attack or c) move/attack. Units perform one action per turn.

After a unit has taken an action mark the unit as being activated. When the Turn D6 scores a 1 and the turn ends remove all activation markers.

And the preferred option is...

Having played both options I have gone with option 2 for a couple of reasons. Firstly, it is quick and no stopping to count units. Secondly, the Turn D6 presents an interesting opportunity to add special events when a 6 is scored. For example, the winning player who has a Turn D6 score of 6 can be allowed to place an activation on an enemy unit rather than performing an action themselves.