WW2 Campaign action on the road to Stalaff

The action on the Stalaff Road has a cobbled together Guards force attacking the second of the Panzer Grenadier advance forces. The composition of this force was unknown, but was soon found to be a very strong.

The German force has:


The British Guards has:

The action has the Guards advancing from the East edge and Panzer Grenadiers are positioned on the West edge.
This was a bad result for the Guards who lost their engineer company and tank troop. The Panzer Grenadier force was well balanced with both artillery and AT support and able to easily deal with the Guard force.

The Guards are now in a very sticky position with no more space to continue their fighting withdrawal approach and in the next round of games will have to hold their ground.
Posted by Peter at 20:58 10 comments:

The advancing Panzer Grenadier force opted to cease their Southerly thrust on the campaign map and deal with the Guards threat on their flank. The resulting action takes place at a sunken road.

The Guards took up position on one side of the sunken road waiting for the attack to begin.

Another interesting game with both sides trying to avoid losing units while at the same time trying to inflict damage on the opposition. The campaign context continues to make games which are oddly unbalanced into challenges which don't exist in single games.

Next project and other stuff

Now I have completed my Saxon and Norman paper armies (although I do have some Viking paper solders still to add) I am starting on my next project to paint some Fantasy units to play Dragon Rampant. I really enjoyed Lion Rampant and bought the Dragon Rampant rules quite a while ago with an aim of playing some fantasy games in the future.

I already have a number of Warhammer Orc units painted and will use the Warhammer Age of Sigma starter box to provide some opposition and add to these with one or two extra purchases to build a small army (most likely from ebay).

Having played quite a few WW2 games as part of my current WW2 campaign. I was in need of an 18th Century fix, and what better excuse to get out my old Peter Laing AWI figures. No game reports just some photos... 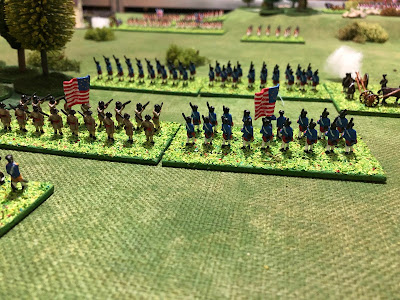 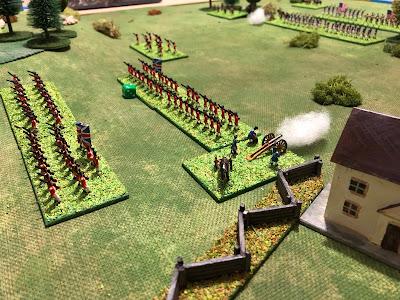 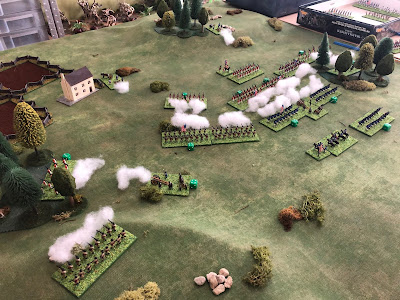 Finally, some more second hand books arrived. I have Ancient and Medieval Wargaming as an eBook and just wanted to get a hardcopy. The Wargamers Guide to Dark Age Britain was reasonably priced and too tempting to pass by. The Saxons and Normans will quite possibly be on the tabletop in teh near future. Finally, Battle Notes for Wargamers was purchased mostly for nostalgia, but I am very tempted to create the Raid on St Nazaire once I complete the current WW2 campaign.

The next two WW2 campaign actions have been fought and will be the next post or posts.
Posted by Peter at 22:56 11 comments:

In the last action "B" company with air support were able to successfully make a fighting withdraw. They now are positioned on the southern row defending a river. Orders are issued to the Guards units (see red arrows) and air support is again provided to "B" company. These moves will be actioned after the dice driven Panzer Grenadier moves are made and any resulting actions fought.

As for the Panzer Grenadiers most of their elements pushed forward with the exception of their advance force which moved to eliminate the treat on their flank. This action will now be transferred to the tabletop. 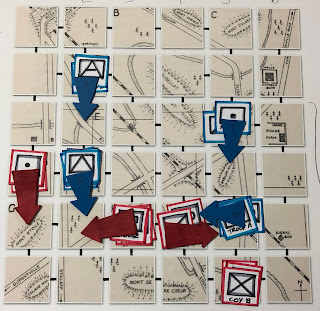 Once the action has been played the British orders will be actioned.
Posted by Peter at 21:54 No comments:

In this action we have a Panzer Grenadier force supported by two tank troops and armoured cars attacking across the Louisville Road railway bridge. While a weakened Guards force is facing this armoured threat and is planning a fighting withdrawal, and now have the support of air support.

The order a battle...

The Guards' plan was simply to use their artillery and mortar section to inflict as much damage as possible and rely upon air support to take care of the German armour.

Overall a good result for the Guards which with their air support were able to eliminate a troop of Panzer Grenadier tanks and armoured cars. Putting a dent in the armoured thrust which had looked certain to force their way to the South.

A quick note on the rules for air support and AA units. Air support can attack any unit as an AT strike and any unit within 12" of an AA unit is treated as being in cover. I plan to post the rules once the campaign is ended. Aside from units being activated by playing cards I am playing quite a conventional OHW rules but with D3 dice. So instead of D6+2 it is D3+1, etc. and units are made up of 2 bases and are eliminated on their 8th hit (4 hits a base).

With only one action to play its back to the campaign map to plan my next moves against my dice driven opposition.

After completing three WW2 campaign games last weekend it was time to return to the campaign map and plan the next moves. A large Panzer Grenadier tank and armoured infantry force has been discovered on the Guards right flank.

As the solo Guards player I chose to retire the defensive line again and hope to reorganise to support "B" company who were facing the bulk of the armour. Now that HQ was aware of the major assault the guards was facing, air support is being provided to "B" company.

While Panzer Grenadier movement continued southward, some units shifted to move around the Guards defensive line.

This weekend there will be one action as "B" company with the support of artillery and air support will attempt to slow the armoured advance before taking up their final defensive position on the river.
Posted by Peter at 20:41 2 comments:

The third game played this past weekend for the WW2 campaign sees a large force of Panzer Grenadiers attacking the Guards line of defence.

The orders of battle reveal the battle will be very lopsided, especially as the Guard's lack any AT support.
Faced by a large force well supported by tanks the Guards planned to put up an initial defence and withdraw.
The main Panzer Grenadier has now been identified and the Guards will have to adjust their defences to this threat in the coming campaign moves. This was a costly defence for the Guards who lost two armoured infantry platoons.
Posted by Peter at 21:44 6 comments: