After two successful engagements the Sons of the Sword were closing in on the Orc's, and their mountain home base. They had spread out their units to track down the Orcs and in doing so quickly came across a small force. Well that is my narrative for rolling low and having a battle with 4 units each side. It could easily been 3 units per side if the rolls for reserves had not been successful. 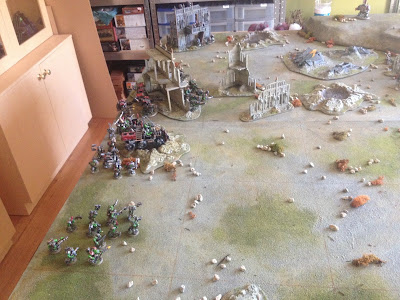 The Space Marines had the high ground and placed their dreadnaught on the hill to take advantage of increasing its shooting range. While the scouts, using the scout ability, took up position on the Orc left flank in a ruined building. 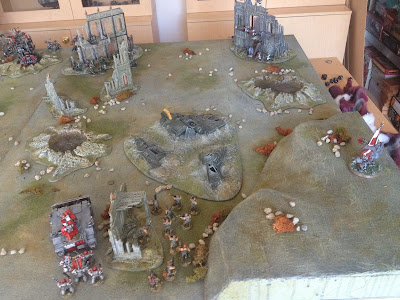 The Orc war bands all advanced while the Killa Kans quickly eliminated the scout unit with some excellent shooting. 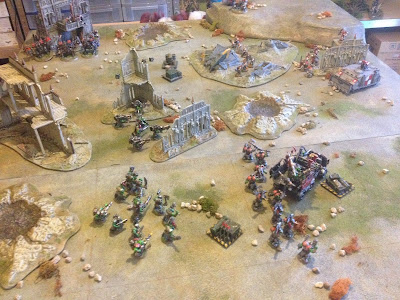 The Razorback came under attack after inflicting a few casualties and was destroyed. At this point the momentum was very much with the Orcs. 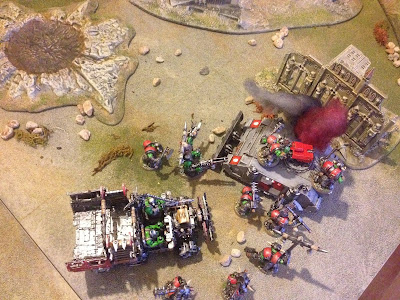 Meanwhile in the centre the command squad lead an assault on the 'eavy boyz and after a couple of rounds. 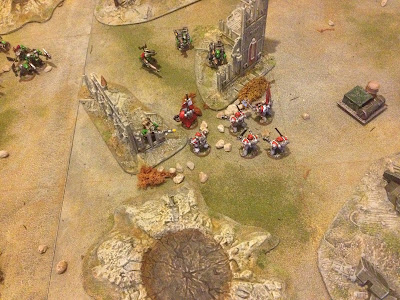 The dreadnaught started to pick off the Killa Kans as they advanced. Finally it started to roll some hits. 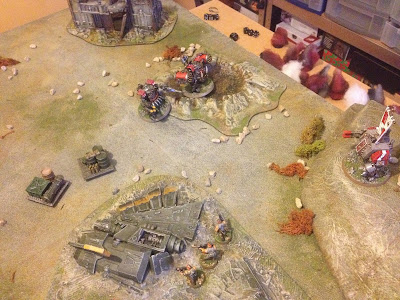 After their triumph over the razorback the Orcs charged into a combined Space Marine command squad and squad of planetary defence force. Both sides sustaining losses while the veterans of the command squad won through in the melee. 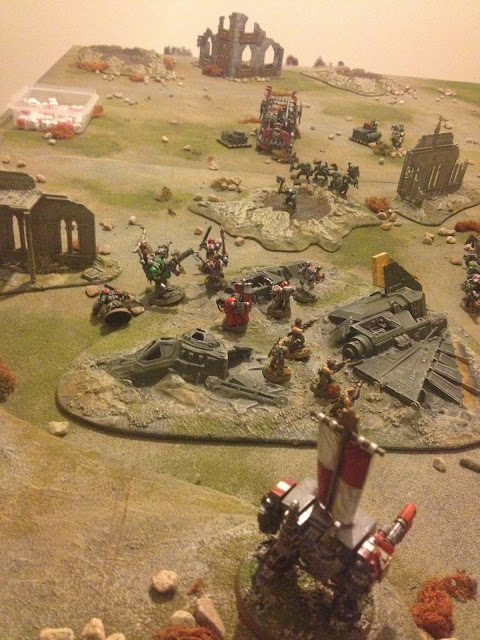 The Orcs had successfully rolled, prior to the death of their warlord, for a waaagh (the "call to arms" ability in my rules) which allows an additional unit to enter an adjacent zone. The unit charged in with revenge on the minds after seeing their warlord slain. The dreadnaught having destroyed all the Killa Kans arrived to provide additional support, only to take a critical hit straight away, putting pay to any Space Marine comeback. 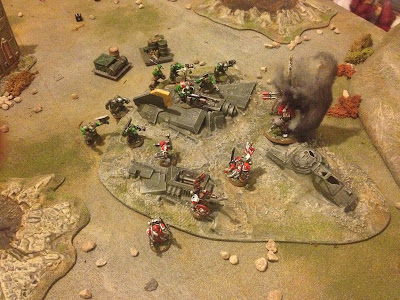 An Orc win! Prior to the game I had made a couple of rule changes and clarifications. The main change was to the vehicle damage chart so vehicles and monstrous creatures are shaken on a 4 or 5 and not just a 5.
Posted by Peter at 17:24 No comments:

2nd Battle of the Caracalla campaign

The second battle in the Caracalla campaign was fought in the rocky landscape east of the mining complex Alpha 825, as the Sons of the Swords capitalised on their opening victory.

There were four ammunition stashes in the game with the aim to control these objective zones. In the event of a tie, the side with the most remaining intervention tokens would win. Decisions would have to be made as to whether to conserve interventions or use them to achieve objectives. Control of the centre was to prove important for both sides with two objective at stake. 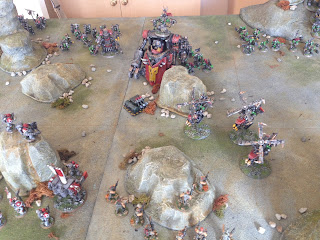 While on the marines left flank both sides traded shots with casualties being very even and neither side gained an advantage. 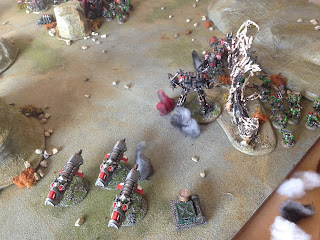 Meanwhile in the centre the timely arrival of scouts saw off the remaining orcs troops. 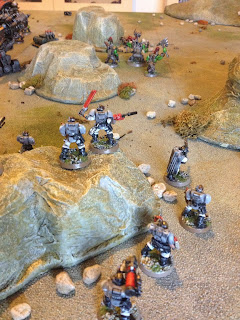 The dreadnaught slogged out a hard won victory seeing off the last real threat, and any orc come from behind victory. Especially with some very poor dice rolls meant the orc reserves did not arrive. 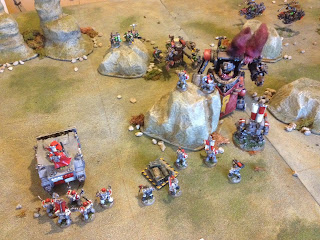 A final last gasp counter attack was repulsed by the command squad and remnants of the tactical squad. 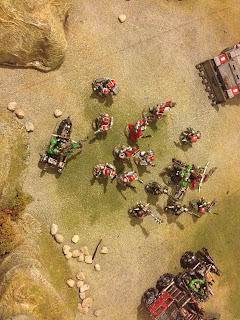 The assault squad finally arrived after victory was assured. Only to lose half the squad to the deff kopters flyers (house rules) which had successfully harassed the marines throughout the game. 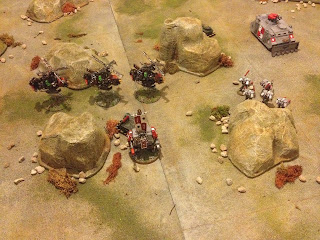 The Sons of the Sword now prepare to move one step closer to the Orc home base in this campaign.
Posted by Peter at 22:33 No comments:

Start of the Caracalla campaign

To begin the campaign I wrote a mission brief, an idea I grabbed from reading about 40K campaigns in the Going on Campaign blog (http://goingoncampaign.blogspot.com.au).

+++ Mission Update +++
+++ Your strike force is to retake the mining complex Alpha 825 from the Orc invasion. Then drive on to their home base in the Alludar Mountain Range. The space port has been made available as your supply deport and as home base. +++

For each side, Space Marines and Orcs, 10 units were selected for the campaign on the planet Caracalla. 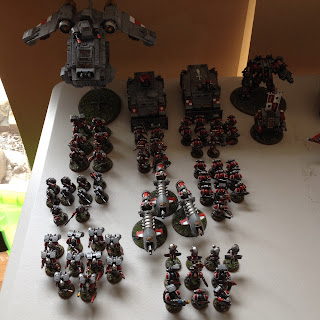 Sons of the Sword Chapter space marines above and Orcs below. 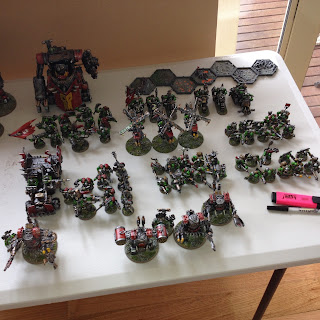 The first battle to be fought was at the mining complex Alpha 825. The table set up randomly using dice throws. It consisted of 1 hill, 4 buildings, 4 broken terrain and 4 alien looking tree. Because the table is divided into a grid of 24 zones (4 rows of 6 zones) for each row I roll a dice for each terrain piece inch row. So a row had one type of each terrain, building, broken and trees. The exception was the hill which had to go into a corner of the table, and again was randomly generated. 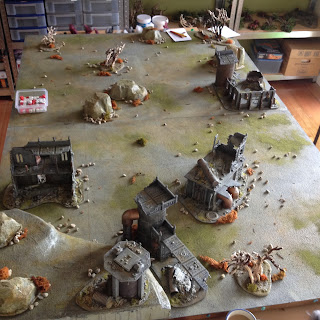 Each side had 7 units randomly selected from their 10 units plus one extra unit of defence. The Orcs got some defences and the Space Marines were supported by one Imperial Guard unit. See my previous post on how units get selected for a battle.

The forces tool up position, Orcs on the left and Space Marines on the right. A devastator squad takes up position in a building. 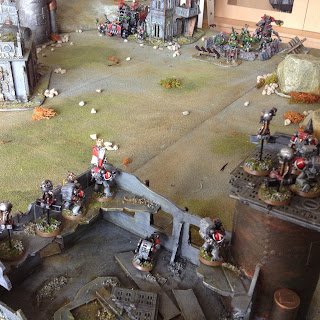 While command and tactical squads advanced on the left towards the Orc position. 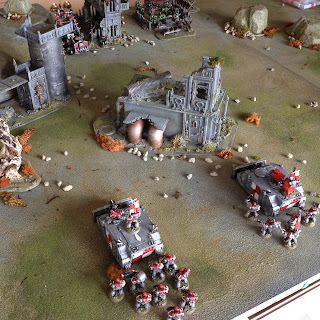 The Orcs were looking for a fight and quickly attacked the advancing command squad. 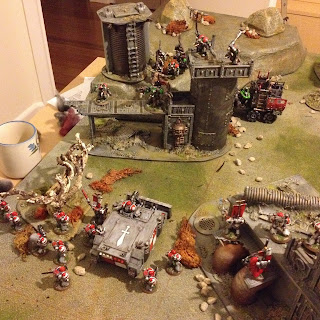 Only for the timely intervention of the Stormraven to land and a terminator squad to attach from the rear. Saving the day! Or the command squad in this instance. 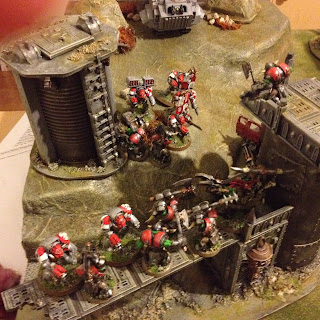 The Orcs responded with Deff Kopters as their reserves started to appear. In my rule set these are treated as flyers. 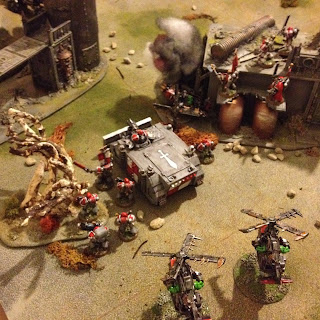 The Stormraven having delivered the terminators quickly took off and dealt with a nearby Deff Kan. 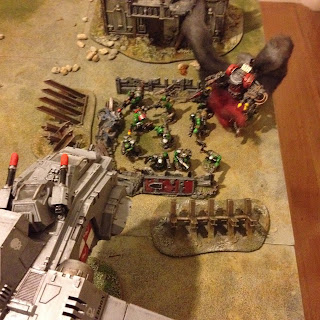 It was at this point things were looking pretty bleak for the Orcs, and I was thinking the game was up for the green lads. Then using an intervention to get fog of war their war-bikes launched an attack on the other flank. 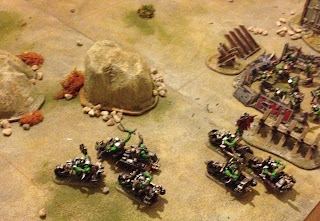 The devastator squad supported by hover bikes moved to engage and counter the treat from the war-bikes. 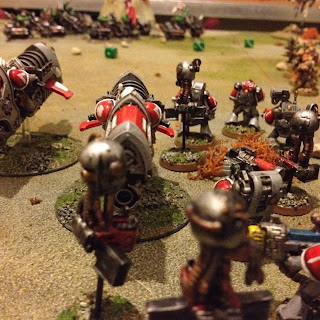 Gunning their war-bikes at full throttle the 2 orc war-bike units launched themselves into battle with minimal losses, and doing lots of damage by wiping out the hover bikes. 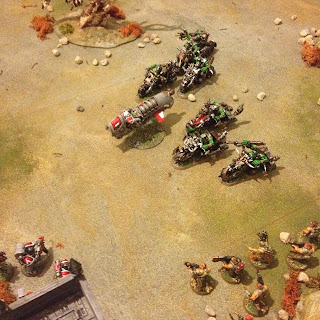 With the war-bikes tearing up the flank the remaining Orc unit moved to engage the devastator squad. Meanwhile. the remnants of the command and tactical squads, combined to provide support to the centre. 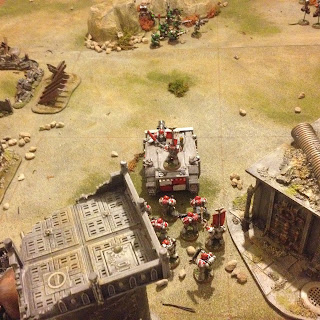 The Orcs had reversed the momentum of the battle, it was definitely in the balance, as they wiped out the devastator squad. The imperial guard were not to going to hold out much longer. 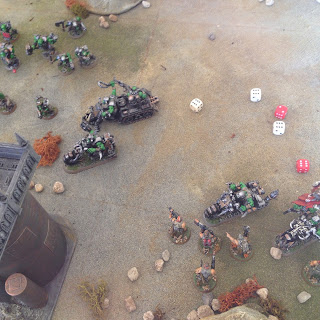 The combined squads arrived taking the Orcs by surprise and quickly put pay to any thoughts of an Orc victory. Seeing off the war-band with bolter and chain-sword. 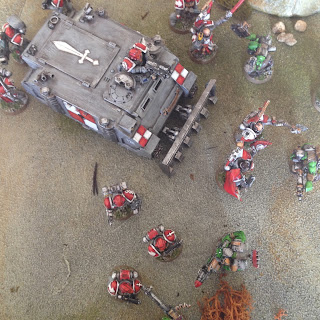 In the end, a minor victory to the Sons of the Sword, who now move forward one step on their quest towards the Orc home base.

From a rules perspective the overrun rule by vehicles proved important to the Orc war-bikes and the tactical squad when backing up in the centre.