Over Christmas I found time to write up some AWI house rules based on the Horse and Musket Age Wargaming rules from the book “One-Hour Wargames” by Neil Thomas. There are other ideas included, such as: command ideas from Volley and Bayonet, and combat mechanics from the blogs The Stronghold Rebuilt (GNW rules) and John's Wargames Page (combat mechanic options).

I have added the draft rule write up (5 pages) to my rules page (Rules Page - click here or  the link at top right of page). Based on previous experience I will be modifying these over the next couple of months with clarifications and removing typos. I am a solo wargamer and it can take a while knock rules into shape. I lack that independent view and input of different ideas. Anyway, here are a couple of ideas introduced to the OHW AWI rule format.


The use of command ranges places the reliance on linear formations to move units and reflects some of the difficulty in coordinating movement often in difficult terrain.
The command range does not restrict combat as those decisions left more to the units commander.
Moral
Moral checks occur whenever a 6 is rolled when shooting or for cavalry charges. Only one moral check is taken for any attack regardless of the number of 6’s rolled.
Roll 1D6 with the following modifiers:
+1 if in cover
-1 if skirmishers
-1 if militia
A score of 2+ and the unit stands. Otherwise, the unit retreats directly away 1 square and takes 1 hit. If the unit’s retreat is blocked by a friendly unit, then retire behind them and the blocking unit also takes 1 hit.
If a units retreat is blocked by an enemy unit it is eliminated.
Other stuff....
At Christmas one wargaming present was the book "The Solo Wargaming Guide". I have quickly read this and really enjoyed it. It is geared towards solo campaigning and has many good ideas in its 120 pages. I am now enthused in the new year to do some small campaigns to add some context to my games. 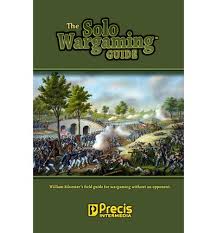