In September 1645 Parliament was under pressure for a victory having lost control of the West Midlands earlier in the year. They were able to muster an army and marched on the Southern Coast region.
Having forgotten to use the campaign cards in the last game. I opted to draw two cards this campaign move. Parliament received support from Scotland and will gain an extra infantry unit for the remainder of 1644. They also received a Royalist card so this was ignored. 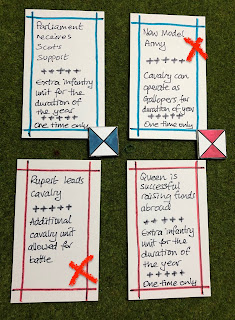 Royalist forces will also receive an additional unit during 1644 as the Queen had been successful at raising funds abroad, but they too have to ignore a card.

Parliament was unable to recruit a large marching force, and was very grateful for the additional Scottish unit. While the Royalist cause was well supported and news of earlier victories having swelled their numbers. The orders of battle are...


Royalist Forces
Terrain cards were drawn and Parliament, being the smaller force, selected their side first. The only change was made by the Royalist side to rotate a card to place a wood further forward to provide cover.

Units were deployed. The Parliamentarian commander set his centre between to the woods and buildings. On his left flank commanded shot held the woods and on the right flank all Parliament's horse units were combined. His hope was to charge around the woods and attack the Royalist rear.

Recognising the cavalry risk the Royalist commander duly held a large group of foot units in reserve. Other than that his deployment was fairly standard with horse units on each flank supported by dragoons.

The battle began with Parliament pushing forward their centre and attacking on the right flank with all their horse units. Royalist horse and dragoons were soon engaged on the flank.

The Royalist attack on their right flank had mixed results. Their dragoons suffered heavily from musketry by the commanded shot in the wood and were forced to make a hasty withdrawal. Their horse charged Parliament's centre which had been sustained a steady bombardment from their guns, but the centre was able to repulse the charging horse.

On the other flank Parliament's cavalry had been successful in winning the cavalry engagement. Their planned move on the Royalist rear was frustrated by well positioned Royalist units. They chose to regroup and retire to their lines.

Both sides flank attacks had failed to provide the results they wanted. It was late afternoon and neither commander wanted to make another attack, and with losses equal the Battle of Fernhurst was a draw.
A draw will mean another battle will be fought on the South Coast as both forces regroup and reorganise.
Posted by Peter at 20:50