In September 1645 Royalist forces had after a couple of close battles managed to hold off a move by a Parliamentarian marching army to wrestle control back of the South Coast region. In October a Royalist marching army was recruited and made a move upon the East Midlands region. This will most likely be the last Battle of this campaigning year and is critical for Parliament to win having already lost control of the West Midlands earlier in 1645.

Both sides still have campaign cards which will last for the remainder of 1645, and draw additional cards for the upcoming battle. Parliament has a dashing officer in their ranks who can be called upon during the game to halve the hits any unit has. Recruitment for the Royalists marching army was  hampered by recent clubman risings which have drawn off one unit to to help suppress the unrest. 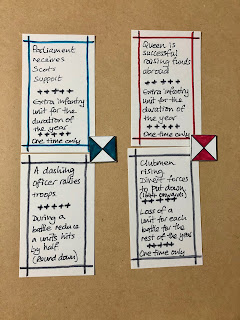 D3 dice are rolled to determine the units involved and the campaign card additions and subtractions made. The order of battle will be:


The battle will take place at the small village of Yaxley. Terrain cards are shuffled and laid out. Each card represents a 2 by 2 foot area of the tabletop. The Royalist commander having the smaller force chose their side first and made one card swap to place Yaxley village in the centre. Parliament's commander chose to rotate a wood card rather tham make any card swaps.


So all is ready to setup the next campaign game. Has Parliament's luck finally changed or will Royalist forces capture another region and seal a successful campaigning year?
Posted by Peter at 22:09