As the battle progresses into the afternoon of 24th June 1863. Union forces have been able to capture the railway bridge in morning, but exhausted Rawlin's and Cope's divisions in doing so. In an aggressive move Confederate forces have swung Lyons' division across the Redmond River to threaten the Union's left flank. 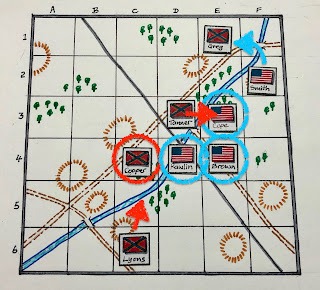 Orders were written by both generals. In this solo campaign I am taking the Union side and will write one set of orders for them and two sets for their opposing Confederate general. then let the dice decide which set of Confederate orders are actioned.


Confederate orders to be actioned on a 4, 5 or 6:
The dice roll was a 3 so the first set of Confederate orders were actioned. Union forces won the dice-off to make their first move, there on after each force taking turns to action one of their orders in the sequence they were written. When moving a division a D3 is rolled to determine how many squares they can move (no diagonal moves allowed).

This weekend I will hopefully be playing two games over map coordinates E1 and E3.
Posted by Peter at 23:23