Work is progressing with the painting of the Carthaginian army. I seem to be averaging about three units per week. As my aim is to have between 10 and 15 units per army and with the current rate of painting I am hoping to get the armies close to complete by Christmas. Then I will have to make another mat for the tabletop. For this I will most likely use a painters drop cloth and colour with various watered down acrylic paints in a similar fashion to the WW2 Western Desert wargaming cloth (see here) but with a tad more green.

I decided to see how skirmisher units would look on the 3x4 inch bases. I opted to reduce the 12 figures per base for other infantry down to 9 figures for these units. The painting style I have settled on is simple block painting and a shinny finish.

On the gaming side I managed to squeeze in an ACW game using a hex grid. I am currently converting the One-Hour Wargaming style rules to be hex based and also have been introducing chance cards to the rules to create some period feel and uncertainty for a solo player.

For the game scenario I opted to use "Action in the Plattville Valley" from the book "War Games" by Donald Featherstone. I was able to adjust the map into a 6x9 hex grid. 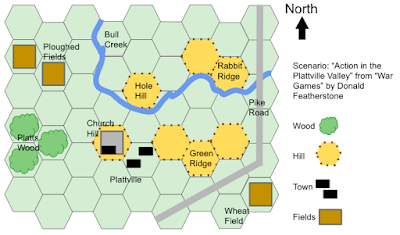 The game report and more on the rules will be the next post.