Preparing the next ECW campaign game

The English Civil War campaign is gradually coming to a close with 1646. The last battle fought was at Dunnington, June 1646, which turned out to be a minor victory to the Royalist cause. Three months later in September a small Royalist force was hastily recruited and marched along the South coast. Their progress was blocked by a stronger Parliamentarian near the market town of Bishop's Waltham.

The campaign cards were drawn. Parliament already hold one card for the whole year and will gain a rousing sermon in the coming battle. Whilst the Royalists army is poorly supplied.

Following the campaign cards the terrain cards were drawn to determine the tabletop layout. 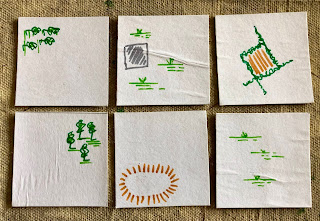 The orders of battle were decided by dice and are as follows.


Parliament forces:
Parliament look to be well placed for this battle, which may well be the last or penultimate game of the campaign.

However before starting the game, the current the tabletop setup is for some 1/300 WW2 North Africa games. I have been adding to the terrain features, and this weekend I had another go at some desert scrub having bought some stick-on grass tufts during the week. They were applied to some painted felt around the edges so not to interfere with the model's placement. In addition I made some improved positions and fortified positions using triangular shaped wooded dowel.


A fortified position uses two improved position features back to back, saving the need to create another terrain piece.