I began my snakes and ladder Jacobite campaign last week and have fought the first battle of this abstract campaign. The distraction of completing the first phase of my War of the Spanish Succession project delayed the writing of this post.
A quick reminder the objective of this campaign is to create a series of battles with the purpose of getting advantages for one final battle, and hopefully not more than a handful of battles will be generated. Other than the campaign board and some initial thoughts (see here) there is a bit of making this up as I go along.
Each time a force lands on a battle rectangle a random scenario is selected from the One-Hour Wargames book. The force landing on the rectangle is the attacking side in the scenario. If they win they advance along the green arrow taking them closer the end battle. The other force has nothing to gain, other than denying the advancement of the other force. Although I am thinking of changing this to allow some benefit in the last battle, for example, an additional commander for each victory by a defending force.

Government forces won began the game with a 4 and land on a square which provides them with supporters in the regions which speeds up their march. 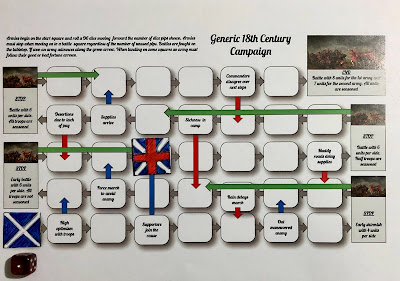 The Jacobite cause gets off to a slow start with a 1. 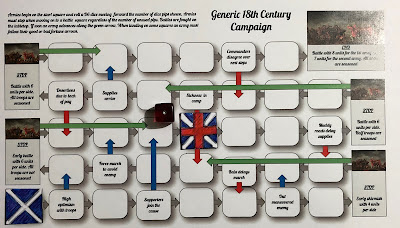 The low score continues with Government forces scoring a 1. 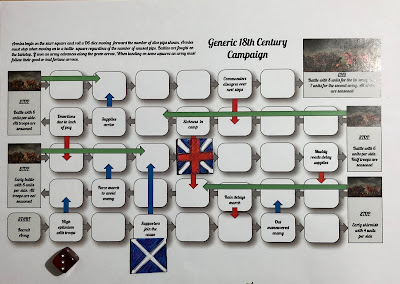 A score of 3 sees supports flocking to the Jacobite cause. 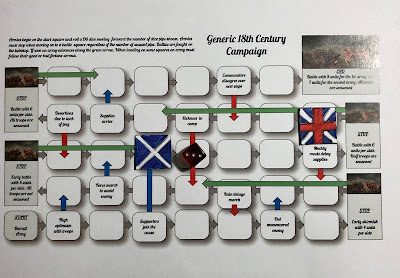 The march of Government forces is delayed as muddy roads hold up their supplies. 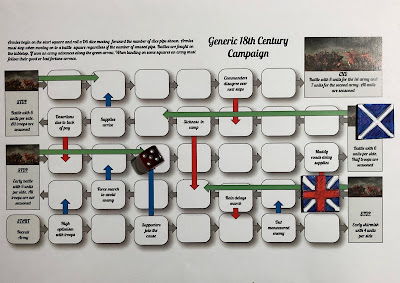 As score of 5 sees Jacobite forces make the first aggressive move and the battle is setup.
A random selection using a D3 for 10's and a D10 for 1's came up with a 1 and an 8 for scenario 18, counter attack, from One-Hour Wargames. There is no battle report for the game other than to say the Highlanders proved unstoppable as they charged forward and captured the bridge before a flanking force of Government troops could create any threat. 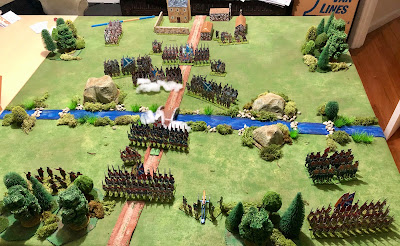 Game in action
The win will benefit the Jacobite forces who will advance 5 squares on the campaign board.
Posted by Peter at 20:38