Following the failure of the 21st Panzer Division to make any headway against the 7th Armoured Division in game 1 or the 10th campaign turn. The 15th Panzer Division advances to find it may have found a weak spot in the Allied defences. They are attacking a weakened South African Infantry Division who are yet to be reequipped after their previous engagement. 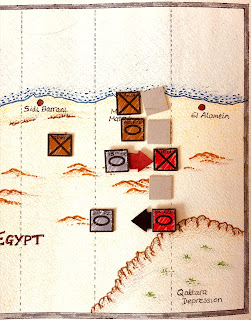 Terrain cards are selected and the Allies choose their defensive edge. Because this was the second game of the campaign turn, neither side can make any card switches. The dice decided the attacker is making a surprise flanking attack. Elements of the South African Division are able to occupy their half of the tabletop and the attacking 15th Panzer Division elements start with half their units on their base edge and the other half in reserve ready to arrive on a chosen table edge. 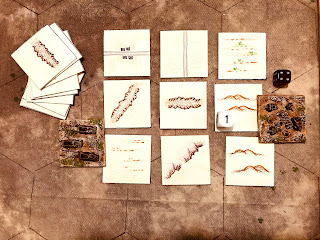 Elements of the 15th Panzer division

The 15th Panzer plan was plan was to have two strong flank attacks, one along the road and a flanking attack on their right from off table. The Allies were taking up a defensive position around the hills and a single objective.

The opening moves went pretty much as planned for the 15th Panzer's attacks and they were soon engaged by the defenders. However, on each flank Matilda tank units were proving to be very frustrating adversaries and the attacking momentum was lost on both flanks.

Having lost the attacking momentum on the flanks the German centre was pushed forward along the track. A Matilda tank unit was pushed forward to counter this move and soon had them in retreat. At the same time a second wave of units arrived on the right flank. They were able to push along the road to where it crosses the track getting behind the Matilda unit and isolating it from the defensive line.

As the remaining German flanking units arrived on the right, they were able to exploit the gap left by the Matilda tank unit and push up quickly on the objective. A 25 Pounder artillery unit was standing between them and victory. Time was running out (with only two turns of the game left) and the first attack on objective hill would need to be decisive.

The Germans were able to dislodge the defenders on their first assault and take the hill objective. On the last turn all Allied hopes rested with a counterattack to make the hill contested and the game a draw. The final chance card was drawn to reveal they have an ammunition shortage and all Allied hopes faded as they failed to make a third action.

At one point it looked like a weakened Allied force was going to produce a surprise win as the clock ticked away for the attackers. Only to have it snatched away at the end as a gap opened up in the defensive line.