I have been trying out a few WW2 Western Desert games with the rule modifications to Lock 'n' Load's Tank on Tank boardgame, and here is a game report on one of those games.

The rule variations can be found in a previous post. The only change to the variations made were to allow AT and Artillery units to move 1 hex rather than be static.

If you are not familiar with the Tank on Tank rules. An overview and review of the boardgame can be found on Battlefields and Warriors. It is an excellent read. The rules themselves are free to download from Lock 'n' loads website. I think they are very nicely written rules too. They provide a simple and fast game which fits with my preferred style of wargaming rules. 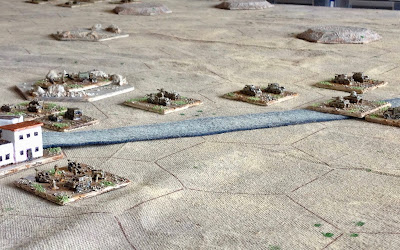 Some of the photos in this post are not great, I am getting used to photographing 6mm models. The models I completed this month (December) certainly provide the look and feel I wanted for my WW2 Western Desert games. I am now planning phase two of the project in the New Year, which will add some Italian units and one or two extra tanks so I can extend to gaming into the Tunisian campaign. 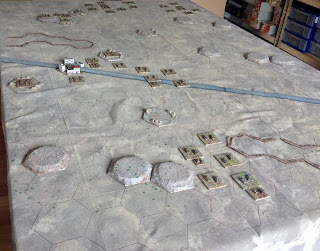 Anyway, back to the game which starts with the leading elements of the British 4th Armoured and 22nd Guards having recently captured the town of Sidi Balsa. They now need to prepare quickly for the expected counterattack from the 15th Panzer division. 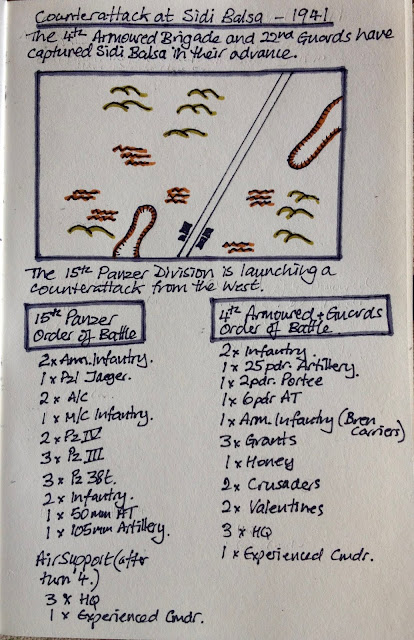 British forces are all setup within 2 hexes of the road and a reserve near the Eastern wadi. They plan to push their armoured units into the Northern hills, while their armoured reserve moves up to fill the vacated space in the centre. 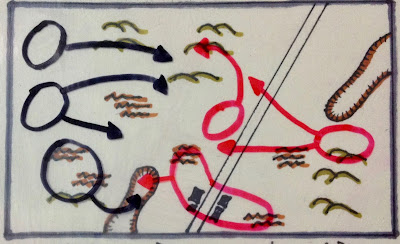 German plans are to grab control of the Northern hills, hold the centre and probe the defences around Sidi Balsa.


The end result was a successful counterattack which forced a hurried British withdrawal.

In terms of the rules they worked well for me and provided an enjoyable game. While at first glance it seems to be too easy to eliminate units, a player is limited to only a few actions each turn, and any attacks need to be balanced with manoeuvring the rest of your force to gain tactical advantages.

Having AT and artillery units to move 1 hex worked. So I am removing that rule variation and going back to the core rules which does allow movement.
Posted by Peter at 12:44