Game 11 of the English Civil War, and the last game of the campaign 1642 year, has the Parliamentarian and Royalist forces contesting for control of the Cornwall region. The locally recruited forces clashed near the town of Callington.

The battle began at 9am with the Royalist commander eager to attack the Parliamentarian forces which had taken up a defensive position straddling a nearby village.

The early moves saw a unit of Royalist commanded shot move up to occupy the church on their left flank. Parliament responded to this moving up their dragoons to engage in a musketry dual. Meanwhile in the centre, after the Royalist artillery ran out of ammunition, their full contingent of dragoons and part of the centre line moved forward to harass the village defenders.

Nervous of Royalist right wing cavalry, the Parliamentarian commander moved his reserve cavalry from behind the village to counter any ideas the Royalists may have had of sweeping around the woods and attaching the rear. The Parliament centre units, supported by commanded shot located in the woods, were putting up a stout defence and the Royalist dragoons ranks were being quickly thinned out.

With their dragoons routed the whole Royalist centre and left wing cavalry advanced forward to engage Parliamentarian forces in the village. Shooting from the village was fierce and very quickly all the Parliamentarian centre was out of ammunition. Their cavalry right-wing was holding their own having moved up to engage in pistol fire. The Royalist cavalry quickly reacted and charged and a cavalry melee ensued.
At just after noon the battle was very balanced. The centre was in a bit of a stalemate while on both flanks cavalry melees were underway with neither side gaining the ascendancy. At this point the Parliamentarian commander ordered his commanded shot to move from the safety of the woods and engage the Royalist centre on the flank. 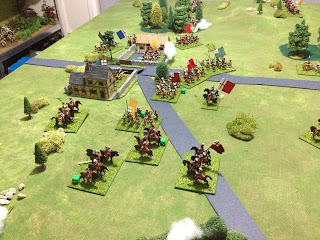 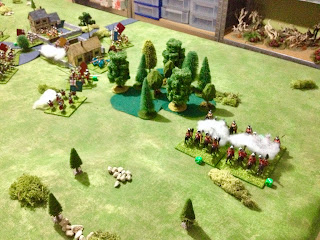 By mid-afternoon Royalist cavalry on both flanks had gained ascendancy. Although one unit of Parliamentarian cavalry still held the hilltop on their right flank.

The situation in the centre was still good for the Parliament as their units were putting up a stubborn defence and the Royalist commander was beginning to be worried that his attacking infantry may crack and rout. However, relief came from his left wing cavalry, who having defeated their counterparts, charged the exposed commanded shot who were a thorn in the side of their centre.

Having lost control of the flanks the Parliamentarian centre succumbs to the pressure and their forces retire late into the afternoon. 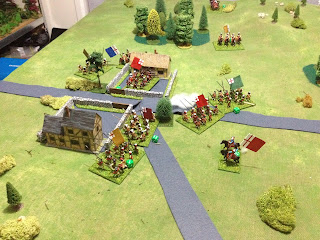 Another victory to the Royalist cause who end the 1642 campaign year in a good position. The campaign will be continuing into the year 1643 with slightly adjusted rules for the campaign now all the regions are controlled by one or the other side. Also for the battles there will be the introduction of chance cards which may aid, or hinder, a marching army on their way to battle.