Today I mainly stayed inside and avoided the heat outside. This time has allowed me to complete the campaign chance cards I will be using for the next stage of the English Civil War campaign. When a  battle occurs both sides will draw one card. Some cards are specific to Parliament or Royalist. If they are picked by the opposing side they are ignored and treated as a blank card.

As the campaign progresses I will most likely add more cards when they get shuffled for a new campaign year.

When a battle is to occur I will be using terrain cards to determine the tabletop terrain features. I have shown these in past posts, but have not explained how they are applied when laying out terrain on the tabletop. I was also recently asked a question as to whether the orientation of the cards matter.

To start off I have 18 cards made up which reflect my available terrain: 2 large hills, 2 smaller hills, 5 woods, 1 town, 2 farms, 1 river, 1 fordable river, along with and 1 open terrain card. I do remove cards to reflect the area being fought over. For example, I would remove one of the large hills if doing battle in East Anglia. That way the terrain will more likely reflect the terrain an area would have.

My tabletop is 6x4 foot so each of the cards represent a 2x2 foot segment of the tabletop. After shuffling and turning the cards during the shuffle, 6 cards are selected and placed to reflect the tabletop. The orientation of the terrain feature will be reflected in the placement on the tabletop. The exception is for rivers, which I will come to later.
After I placed the features on the tabletop I then add roads that make sense (to me anyway). With ECW games one road must go across the between the long sides, it is assumed the armies are marching on the road before deploying. Roads will always be placed to pass next to buildings and through open terrain.

Things get a bit more messy when a river card is selected, because the river will run either across the tabletop or top to bottom depending on the card orientation, and will have two crossings, bridges or fords. The card with the river will be treated as open terrain while the river position is calculated using dice. 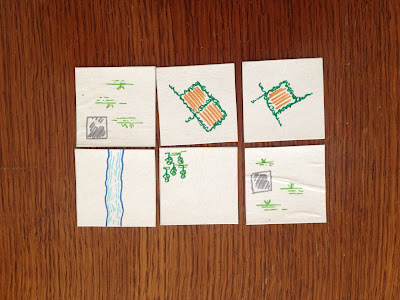 Depending on the river direction roll a D10 for the long edge or D6 for a short edge. For the above cards a 5 is scored and the river is placed. Any blocking terrain, in this case fields, are split or moved to one or the other side using the dice to decide.


Occasionally anomalies do occur, particularly with the larger hills which if moved to one side will clash with some other terrain. Then I use to smaller hills on either side of the river.