Now that the ACW rules are starting to come into some semblance of order and the changes are less frequent it is time to string together a few games with a mini campaign. The plan with the campaign is to keep the games small and on a 4x4 foot tabletop.

As inspiration I flicked through War Game Campaigns (Donald Featherstone) and found in chapter 23 a small campaign for the Franco-Prussian War which would seem well suited for being repurposed for a mini ACW campaign. It has a Confederate force of 4 divisions defending the North side of a river with four bridges, and 4 Union divisions trying to force a crossing. 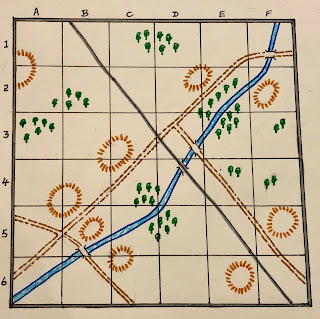 The bridges at coordinates B5 and D3 can be crossed by all units. While the rail bridge D4 and a partially destroyed bridge F1 can only be crossed by infantry. Additionally, the river may be fordable and Union forces can also attempt to construct a pontoon bridge.

The hope is the campaign will provide a series of actions which can be viewed a one battle fought over 1-2 days which each campaign turn representing a third of a day.

Taking a lead from the book "History shows that few armies seem to go into war with accurate maps". Each map square is a tabletop and is an indication of the terrain which will be determined using terrain cards stacked with cards to fit the likely terrain.

Each side has four divisions which start the game laid out as in the picture below. 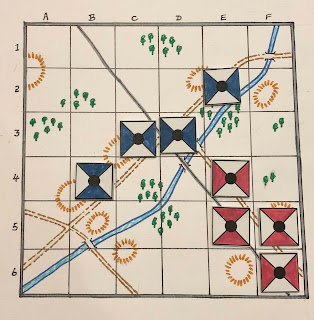 During a campaign turn (a third of a day) both sides take turns to alternatively move one division at a time until all divisions have had an opportunity to move. When moving a division roll a D3 dice (1,1,2,2,3,3) to determine how many squares a division can move. Diagonal moves are not allowed and units cannot stack or move through other units. When a unit tries to move into an enemy occupied square the action moves to the tabletop.

When an action is going to be played the make up of a division is determined with dice and recorded. A division will start the campaign with 6 units.

When a game is being played on the tabletop one reserve unit from any adjacent division can enter the game. If there are two adjacent units there is an opportunity to call upon two reserve units.

Finally, the post arrived with a recent secondhand book purchase. I have always wanted to own a copy of The War Game by Charles Grant since borrowing a copy from the school library when it was first published. 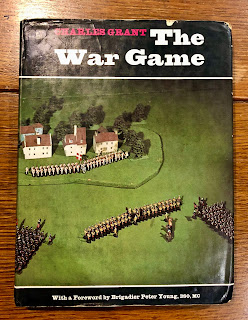