Having completed the terrain, ships and a few commando units it was time to consider the rules to be used. Once upon a time I owned the boardgame Raid on St. Nazaire by Avalon Hill. This was a solo boardgame which had the German defenders moving to a set of rules. This is an approach I want to include in the rules.

The rules have been kept very simple to make the action swift, and I have called them "Attack on the Iron Coast" after the film which was loosely based on the St. Nazaire raid. As an aside, I do remember going to see this film at the cinema and enjoying it when I was young and still wearing shorts. So I had a quick look at the trailers for the film on Youtube. My memory and the trailers viewed 50 years on don't quite match, but I do like the film's dynamic poster. 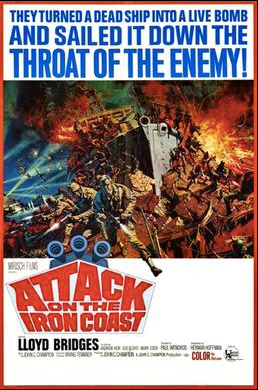 Anyway, back to the game rules as they currently stand after a couple of test games...

The game starts with the landing of the commando parties and the ramming of the dock gates by HMS Campbeltown. The game's challenge is focussed on the commandos running amok and demolishing all their targets before re-embarking on ships from the Old Mole to escape. While the Germans continually feed in more and more reserves making the commando's task increasingly difficult as the turns go by.

Units represent commando raiding parties and German patrols. On the raid commandos were organised into demolition parties, protection parties or assault parties. For the purpose of the game I have combined the protection and demolition parties into single units. Only the four demolition units can blow things up, and are is no limit on the number of attempts at demolition. The remaining eight commando assault units are used to form a bridgehead and put out of action: searchlights, gun emplacements, and pillboxes.

The game is played in turns with the commando player attempting to activate each commando unit first. Then followed by the German unit activation and re-enforcements.

Each unit gets to make a variable number of actions, including no action (more on that later).

During the German turn the following rules are applied to each unit:


A single German reenforcing unit arrives each turn after all German units have attempted activation. Roll a D6 to determine which of the three re-enforcements points their unit arrives (see map). If a unit is arriving from second point (dice roll 3 or 4) then roll a second D6 and if a 6 is rolled, change the infantry unit to an armoured car. This only occurs twice during a game, otherwise it is just infantry units arriving. Any eliminated German unit is reused, so reserves are endless.

Commando landings in the first turn:

Each unit in a player's force is activated once during the player's turn. Assuming a successful activation a unit can move, shoot, attempt a demolition of a target*, or engage in hand to hand combat**.

Roll a D6 and adjust the score:
-1 for German forces to represent the confusion
-1 if a unit has sustained a hit

If the adjusted score is:
Pillboxes always have one shooting action until they are destroyed.

A move costs one action and units when moving must move in a straight line. If a unit is moving it must perform all its move actions together, a unit cannot move, shoot, and move again.

Commando units and German infantry units move 6” for each move action. There are no deductions for moving in built up areas.

Armoured cars move 12 for each move action, but cannot move into built up areas.

Units may pass through friendly units without penalty.

All units, pillboxes, gun emplacements/searchlights are eliminated on taking a second hit.

To attack a pillbox, gun emplacement, or searchlight the attacking unit must be within 3”. Otherwise all ranges are 12".

Gun emplacements cannot fire at ground units and for the purpose of the game they are targets for being put out of action.

A demolition attempt takes two actions and can only be carried out by a commando demolition unit. The unit must be touching or on the target to attempt a demolition.

To determine the outcome commandos roll a 2D6 selecting the highest score. German units roll 1D6. Compare scores the highest score eliminates the opposing units. Re-roll any draws. A bit risky, but a very effective way for commando assault units armed to the teeth to quickly clear out enemy units in cover.

A secondary objective for the commando player is to re-embark any surviving commando units off the Old Mole. Extraction can only take place if the 3 gun emplacements and 2 searchlights are destroyed. If this has occurred, commando units are re-embarked as soon as they are able to move on to the Old Mole.

A few more test games to play before a game report. So far the rule mechanisms are working for me and have delivered some fun games. Just need to finalise victory points.