In the last game Grey's force 2 suffer badly at the hands of two of Blue's forces. As a consequence of their defeat they were required to retire towards the coast. Meanwhile, Grey's force 2 containing the pocket battleship was able to successfully slip into the convoy lane. 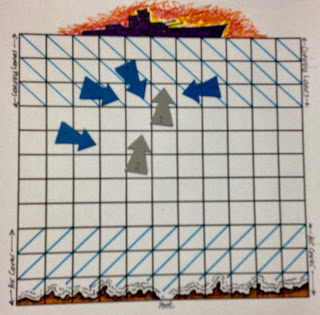 Aware of the pocket battleship, Blue moved the majority of its forces in a screen to locate and hopefully destroy it. A small force of destroyers was sent off to shadow Grey force 2. 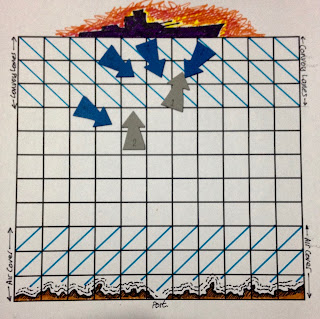 A quick reminder - this is a soo campaign and all of Grey's moves are based on the roll of a dice as they attempt to move towards the top of the map disrupting the convoy lanes. On a:


They continue to do this unless they suffer a defeat, then the same rule applies except the heading for one move is towards the coast (bottom of the map).

Anyway, on turn 9 of the campaign the pocket battleship moved into a zone containing Blue's cruiser and light cruiser part of force 1. The weather was average and would have no impact on the ships guns as they fire salvos at each other. The engagement started at 14:00 which all ship converging on each other.
With neither side was hitting their targets, the pocket battleship appeared to be retiring undercover of a smokescreen. Only to later turn and show its broadside.

Between 14:30 and 15:00 both sides fired salvos at each other. The two cruisers having the better of the engagement were able to cause critical damage to the pocket battleship. So much so, that it could not move and one more successful hit would have seen it sunk.

Blue's cruiser did suffering a fair bit of damage in the engagement as it was the target of all the returned fire. 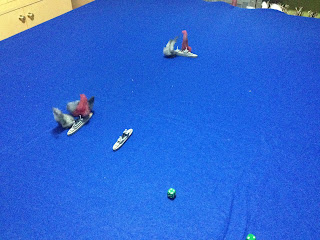 Gunnery exchanges continued between ships as both sides frantically undertook repairs. At 16:15 the heavier guns of the pocket battleship were beginning to take their toll and Blue's cruiser was sunk. 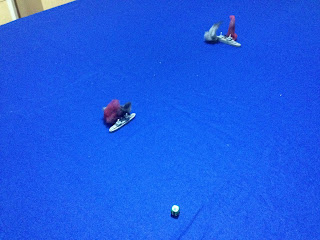 Shortly after at 16:15 the action ended with the sinking of Blue's light cruiser. Final messages to the rest of Blue's fleet were they had severely damaged Grey's pocket battleship.

Under normal circumstances with a victory, Grey's force would automatically continue to move on the campaign map towards the top of the convoy lanes. But with the pocket battleship having sustained critical damage I will be turning to the dice to decide the next move.


So far in this 6x6 challenge the Panzer8 rules are providing me with a quick and enjoyable campaign game. Taking roughly 30 minutes a game once the forces are set up on the tabletop.
Posted by Peter at 23:02