My painting effort is dawdling along, something which often happens after finishing a project. But  while I am in-between projects I am continuing to fill the void with finishing off a few WW2 units. This week saw the completion of a Sd.Kfz. 250/10 using one of a pair of Sd.Kfz. 253 I have and a spare Pak36 found in the bits box.

This weekend I plan to play game 3 of my English Civil War campaign. The preparation of a game starts with the selection of the terrain for the tabletop. The approach I am using in this campaign is to divide the tabletop into 6 squares each 2x2 foot (I have a 6x4 foot table). Each of these squares will contain a piece of terrain.

When choosing the terrain I use some homemade cards with terrain features drawn on them. These are shuffled and six are selected for each of the 2x2 foot squares. Some of the features are deliberately offset and not centred to show placement within the 2x2 square.

If a river square is drawn, then that particular square will be treated as open terrain and the position of the river will need to be calculated. Rivers flow across the tabletop longways. Two dice are rolled, one for either side of the table (see diagram below).

Once the river is in place the other selected terrain is positioned. Occasionally it may be necessary to adjust a terrain features position to accommodate the river. Then roads/tracks are added, I generally try to have two roads which avoid terrain features excluding towns, and help identify where to place any bridges. 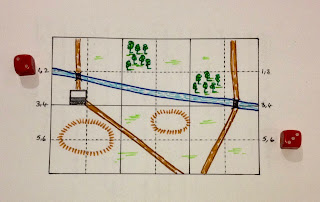 One final note on the rivers there are two cards, one with an unfordable river and one which can be treated as fordable.
Posted by Peter at 19:57