The 1643 campaign year opened in May with the Battle of Pershore. When a Royalist army marched on the West Midlands region, only to be defeated over two days of fighting. The initiative was now with Parliamentary forces to launch an attack from their West Midland location. The natural option open was to move on the East Midland region, which if successful would create a buffer of regions around London and the Thames Valley. 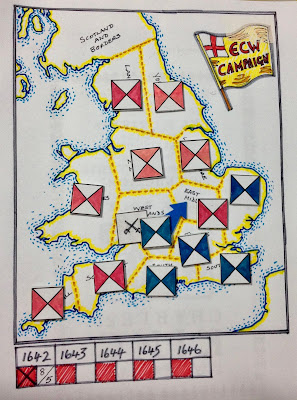 A roll of 3 on a D3 dice decided the next battle would occur in August (May plus 3 months). Next terrain cards were draws to provide a guide to the layout of the tabletop.

The next step was to draw the campaign cards and determine army sizes. The Royalist campaign chance card showed they were able to recruit an elite pike unit to add to their recruited forces. Parliament drew a Royalist card so discard that, but they do have a carry over card for the remainder of this campaign year which allows them to use some or all of their cavalry as gallopers (rather than trotters). They drew this card on day two of the last battle and I was debating at the time whether it was a one off. I have since decided Parliament can retain the card for this year, 1643.

So how did the armies recruit and retain their forces between May and August 1643? The figures in brackets are a D3 dice score and * indicates the one re-roll option each side had.


On paper the Royalists enter the game with a larger force.

The tabletop will soon fill up with ECW units after I have finished messing around with a Napoleonic game I am in the middle of. Trying out a new command and control rule.