To open the campaign of 1643 Royalist forces recruited an army and marched on the West Midlands. Parliament diverted their army to meet this threat and an opening battle occurred at the town of Pershore.

The armies sighted each other in the afternoon and deployed. From a gaming view point the Royalists, having the smaller force, were allowed to deploy on their tabletop side of choice. Placing half their units before Parliament deployed all their units on the opposing side. The remaining Royalist forces are deployed and they will get to go first in the turns and adjust their positions.

Neither army seemed to be in a hurry, so it was late afternoon when Parliament attempted manoeuvres. The river was deemed fordable along its whole length by all units. Cavalry could cross unimpeded with a 6 inch move, while foot could cross but would take 1 hit. There was one bridge near the Abbey where infantry could cross without cost.

Prior to the game both sides had drawn a change card. The Royalists were having issues with their leadership (a bit of rivalry perhaps?) And would reduce their turn activations by one. While it was the opposite case with Parliament's army who had an experienced commander. This increased their activations by one each turn.

A quick note on the use of time in the game. This is something I am playing around with during this year of the campaign. As the rules are a variation of One Hour Wargaming, a game does not take more than 15 turns. However, the game can be limited down to 7 turns due to weather and season of a year. For example: an overcast day in winter can be limited to 7 turns, while a sunny summers day can be as many as 15 turns. A game's turns are further reduced, up to a maximum of 6 by the time of day armies encounter each other.

The lateness of the day has reduced this game to 5 turns. On to the game report... 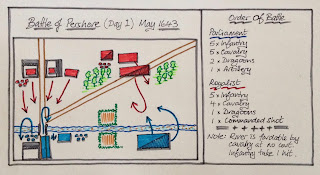 So as darkness closed in. The battle ends with Parliament having secured a position across the river on the Royalist left flank. With limited reserve cavalry Royalist forces decided to stay put for fear of having the army routed by roaming Parliamentarian cavalry.

Losses for this brief encounter are:


Both armies now redeploy using their existing unit positions. All remaining units reorganised (removing any hits) and are resupplied with ammunition.

The existing chance cards will remain in effect for the second day. But as this is almost another campaign game, both sides will draw another chance card. (A last minute decision on my part to mix things up a bit.) 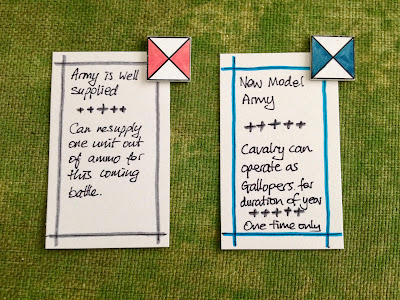 So what will day two bring?