My wargaming effort is currently rotating between:


This weekend I plan to prepare for the next ECW campaign game. First up though is a quick One Hour Skirmish game report using a couple of my very recently painted Orlock gang figures from Games Workshop's Necromunda range.

The game scenario has two undercover Adeptus Arbites, Tango and Cash, along with a squad of Arbites from the local precinct and supported by two Ogryns. They are raiding a local gang's stash of supplies. The Ogryns are slow and can only make one activation, other figures can make multiple activations.

The tabletop area is 3x4 foot with a six inch grid. Squares are categorised as open, rough terrain, or buildings. Both rough terrain and buildings provide figures (within the square) with an extra resolution card. However, with buildings it is possible to hide out of view. Also, if firing from an elevated position cover is ignored. There is a definite advantage to the building levels in this scenario.

The rules for the weapons were kept simple and scribbled down on a piece of paper. The later chapters in the book provided useful examples from some modern scenarios upon which I based the weapon rules.

When setting up the gang, two figures were allowed in each flank building and the remaining six started in their base, the large building complex.

The Arbite plan was to split their forces and move down either flank. Take control of the buildings before both assault the main complex and gang base.

The gang decides to retire. They drew a 2 of Heart, but Tango ended up a casualty and was rushed to the nearest Orders Hospitaller to receive attention. 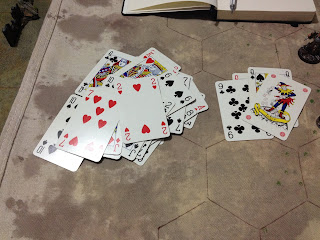 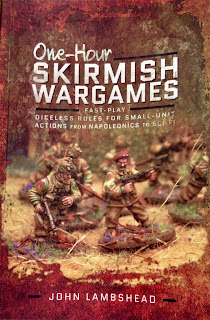 I am enjoying the book and rules, which are designed to be a toolkit, and do deliver on fast "Hollywood movie speed" action games.
Posted by Peter at 21:00