As the Royalist army marched through the West Midlands their path was blocked by a larger Parliamentarian force near the town of Droitwich. Being outnumbered the Royalist army took up position on a large hill opposite the bridge.

While being fordable any unit, excluding artillery, crossing the river would take one hit. So it was preferable to have most units cross the river via the single available bridge.

The battle began around 10am as the Parliamentarian commander pushed his dragoons across the river down stream of the bridge while infantry moved across the bridge supported by cavalry who forded the river. In response Royalists pushed their dragoons into the fields to engage the cavalry at range, and also charged with some of their cavalry into Parliament's infantry who had suffered from accurate musketry. 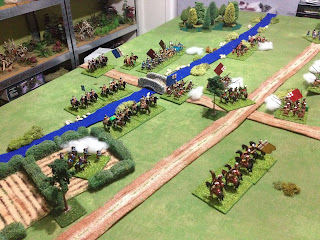 Parliamentarian cavalry soon engaged the dragoons with pistols from across the river while others moved and engaged Royalist cavalry. The battle was becoming an arm wrestle around the bridge with both sides losing units.

On the Royalist right flank the commanded shot were successfully distracting Parliament's dragoons and allowing the Royalist infantry to engage units crossing the bridge unhindered.

By mid-afternoon Royalist forces had lost the battle on both wings and retired as Parliament prepared for a final assault in the hill.

An unsurprising victory to Parliament who entered the battle with 12 units versus 9 Royalist units. The Royalist forces will retire back to the North Midlands to lick their wounds. Parliament will now have at least one opportunity the strike at a Royalist region before the year 1644 comes to a close.
Posted by Peter at 22:44