I have been tinkering with the D3 English Civil War rules for a few weeks now. Originally, they were a variant of One Hour Wargames using D3 dice, but I have made further modifications to the artillery rules and turn sequence. The turn sequence was the largest change and uses homemade cards which determine the order in which a player’s units perform their actions. There are 10 cards in all:

The deck is shuffled together into one card deck at the start of a turn. One player is assigned blue cards and the other red cards. As the cards are revealed, one at a time, a player activates the unit types on the card. Once complete, take the next card from the top of the pack and repeated until all cards have been drawn. Then shuffle the card deck for the start the next turn.

This mechanism is trying to reflect the difficulty of commanders coordinating the various parts of an ECW army. Players don't know the order that their unit types (infantry, cavalry, or dragoons) will be activated, or of their opponents. The updated rules can be found above or click here.

For the game I used the Battle of Hopton Heath description from the book "With Pike and Musket" by C.F. Wesencraft as inspiration. The Battle was fought 19 March 1643 between Parliamentarian forces led by Sir John Gell and Sir William Brereton who attempted to combined their forces to face a Royalist army under the command of the 2nd Earl of Northampton.

I decided to draw up a map to help show the positions and tabletop layout. It has been a long while since I drew one of these diagrams for a game. I do enjoy drawing them, but they do add time to creating a blog post.

The game uses the weather barometer as described in the "With Pike and Musket" book. I made one a couple of weeks ago (see here). I have no idea as to what the weather was like on the actual day, but on my tabletop the day was looking pretty dismal with the possible threat of rain to come. A roll of 9 on 2D6 determined the weather which is adjusted by a D6 roll at the end of each turn, a 1 or 2 moves the peg up one slot on the barometer and a 5 or 6 move the peg down one slot.

The Royalists begin the game deployed between the two roads. Parliament forces arrive one unit each turn along one of the roads. The units arrive in the order of cavalry units first, then infantry units, and finally artillery units.

The game report in pictures...

While the Royalists won, they were aided by the weather which delayed Parliaments artillery and the ability for both forces to join up. 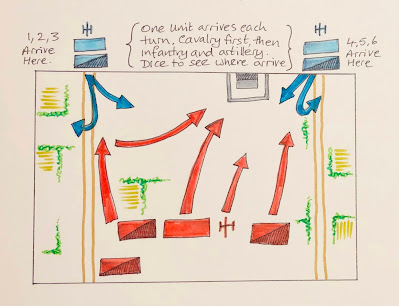