Here is the game report from the WW1 Palestine campaign - turn 3, game 4. The setup can be found in the previous post.

The Egyptian Expeditionary Force (EEF) is trying to breach the Turkish defensive lines around the city of Gaza. This is the fourth attempt and their advance has been delayed my many months. Pressure is mounting upon EEF Headquarters for a breakthrough as troops are desperately required elsewhere. The attack is upon two fortified positions and will be carried out by two assault waves. Both fortified positions need to be taken to achieve a breakthrough.

The plan was for the first assault wave to begin the attack at 4am on the closest fortified position. Once the position is taken, the second assault wave would attempt to roll up the Turkish line and capture the second fortified position. The EEF would use their armoured car unit to delay any Turkish attempts to provide support from their reserve.

The troops have supplies and water to last them the day and will have to retire if the positions are not taken. 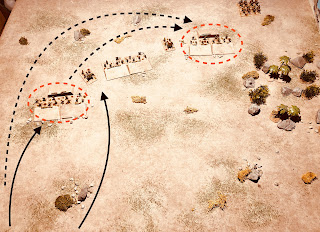 The EEF's first assault wave began moving towards the closest fortified position. The artillery took up position and targeted the Turkish artillery.

The second assault was well underway by 1pm. The artillery shooting was proving to be particularly accurate and the second Turkish artillery unit was put out of action. Removing the artillery was important for the EEF as their troops will not come under fire as they advance on the second fortification.

The armoured car unit was able to hold off the Turkish reserve cavalry allowing the second wave to advance swiftly.

This was an important victory to the EEF and allows them to advance to the next campaign step. The ability to silence the Turkish artillery early in the game was important and allowed the infantry to advance without hinderance.