It is time to return to the English Civil War campaign. In May 1664 Parliament had suffered a loss in the East Midlands, being unable to repulse a smaller attacking Royalist force. So we now move forward to July 1664 curtesy of a score of 2 on a D3 dice which moved the campaign year forward by 2 months.

It was Parliament's turn to move and they chose to march upon the South Coast region. A region they had previously controlled, but had lost earlier in the year 1644.


A quick scan of an old map and the region turned up the town of Alton. This was a name that jogged my memory. There was an ECW battle there in1643, but also it was a battle that is featured in the book War Gaming Campaigns, one of my favourite wargaming books.

Campaign cards are drawn which provide Royalist forces with an experienced commander. This will allow an additional activation each turn during the game. While Parliament enter the battle with an additional infantry unit, a bonus they get for the whole of 1644. They draw a "army is poorly supplied" card. Maybe their preparation had been hasty and the army is short of supplies. Their army resolve will start the game with the lost of one point.

Note - If the army resolve is greater than the number of available units the army retreats. The resolve increases during the game with each unit lost.

The terrain cards are drawn and laid out to determine the tabletop. A few buildings are selected and with the fight for Alton Church in my mind a church was definitely going to appear, although possibly not as grand as in the book. 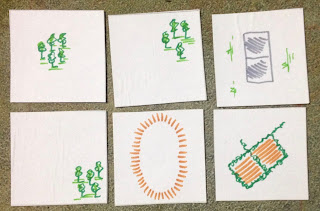 The dice decided the following order of battle (see here for the rules for determining units) and the armies deploy.