Game 22 of the English Civil War campaign has a Royalist force marching into the West Midlands and finding a blocking Parliamentarian force near the small market town of Brinklow.

One thing I forgot to do for preparing this game was draw the campaign cards which add a bit of chance into an individual game, or sometime a series of games. I will have to make sure they are drawn for the next game, and will possibly be drawing two cards per side rather than one to make up for this oversight.

The order of battle (see photo above) was decided in the normal manner using a D3 dice:


Special units are Lobsters for Parliament and Elite Pike for Royalist.

Parliament were going to take up a defensive posture in this game as they had fewer units, nine versus twelve units in the Royalist force. They planned to hold fast behind the stream with their Foot, which while being fordable provided them with a good defensive position when it came to push-of-pike.

A quick note on deployment rules:
Battle of Brinklow Bridge - May 1645

With Parliamentarian forces taking up defensive positions behind the stream, The Royalist commander pushed up his line of Foot and Gun, very quickly both sides were soon engaged in an exchange of Musketry. Parliament's Foot units loosed off some very effective volleys and as a consequence were soon out of ammunition. While Royalist Foot units maintained a slow and steady rate of fire supported by their gun.


This was not the desired situation for the Parliamentarian commander, who berated his officers for their lack of control. He could only watch as his Foot unit's cohesion levels were being whittled away by steady musketry. They would soon be poorly placed to withstand a push-of-pike contest, even with  using the stream as a defensive advantage. To rectify the situation and to use his slight advantage in Horse, he sent orders to both wings of Horse to advance. 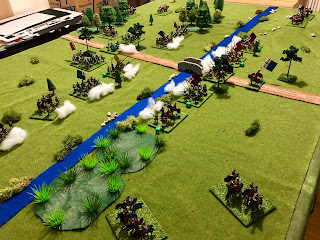 The Royalist commander seeing the threat of Parliamentarian Horse on his right flank ordered a unit of Horse across to counter the move and bolster the Dragoons on the right. Other than that the morning had been going better than expected for him. The loss of a Foot unit, while concerning, had not perturbed him as Parliamentarian musketry had dwindled and was becoming increasingly sporadic.
At midday Parliament's Horse units crossed the stream and launched themselves into the Royalist flank units. With a slight advantage in Horse on the left they soon had nullified the Royalist Dragoons who were proving to be exceptionally accurate shots, and on the right flank the news would prove even more favourable as they routed the Royalist Horse. However, these successes were late in the battle and the damage from Royalist muskets had been done. Parliament's Foot units in the centre with no knowledge of their Horse units success and in the fog of war finally gave up and left the field.

A victory to the Royalists, and quite a crucial one which tightens their squeeze on Parliament and the regions around London.