I was able to play out the last few games of the WW2 solo campaign this weekend. Here are two quick summaries of the games which saw the Guards defences succumb to the advancing Panzer Grenadiers units.

The penultimate action has a small and well armoured German force advancing upon a small Guards force before it was able to retire as ordered. Air support had been called in and was available.

The campaign map below shows the new positions after the above action. The Guards defences are struggling to hold back the advancing Panzer Grenadier forces. As usual the Guards make their orders before the German moves are determined. They chose to split their forces to cover the two nearest threats.
The Panzer Grenadier moves, all dice driven, consolidate a couple of forces and push forward south displacing a lonely AA unit. The final action has a Guard's tank troop, armoured car section and mortar section making a last ditch attack.

So the Panzer Grenadiers have successfully broken through the Guards defence and can advance into open country side. But how strong are their remaining forces? 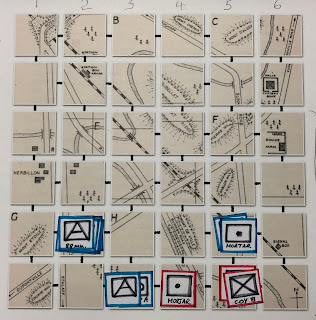 Looking at the available Panzer Grenadier units they could certainly push ahead with their tank troops, but without many infantry lack the ability to hold any gains. Remaining units:


During the course of the breakthrough as they pushed southwards. Over half of their units were lost or rendered ineffective.

A win for the Panzer Grenadiers who had to breakthrough. The next post will cover the rules used and any other thoughts on what worked and did not work in the campaign.